Brutality? In soccer? Not very often, I would think. I don’t ever remember using the word myself, and am pretty sure I haven’t ever heard it from soccer people.

Thuggishness, yes, I’ve heard that plenty of times, along with players being described as thugs. But rarely as brutes.

Yet the word “brutality” is in the rule book. It is even defined as a “football term,” thus: An act which is savage, ruthless or deliberately violent. Which isn’t a specifically soccer definition, is it? My regular dictionary uses virtually the same definition: “a savage act.”

But brutality, having hovered at the edge of the rules since 2002 (when it first appeared in the “additional instructions” section) finally made it into the rules proper in 2016. Currently, it pops up twice in Rule 12, featuring in the definitions of Serious Foul Play, and of Violent Conduct, both of which demand a red card for the use of “excessive force or brutality.”

So there you are. A key word identifying two of the most serious of soccer fouls, yet a word that hardly ever gets used. Have you ever heard of a player being red-carded for brutality? I’m pretty sure that, in what must be thousands of chats, interviews etc., that I’ve had with referees, not one has used the word (though I can recall plenty of incidents which could have been so described).

There’s something rather admirable about that. Evidently, soccer people feel strongly that brutality does not happen in their game, so the word is just not mentioned -- “excessive force” is deemed more fitting.

And just why have I been so assiduously pondering this question of soccer brutality? It lodged in my mind a week or so back, during the Mexico vs. Trinidad & Tobago Gold Cup game -- the one in which Mexico’s star forward Chucky Lozano was badly injured.

His injury came about in a rather unusual way. Lozano was on a breakaway, chasing a ground ball into the T&T penalty area. Two T&T defenders were chasing him, No. 16 Alvin Jones at his left heel, No. 2 Aubrey David at his right heel. Lozano was leading them slightly, certainly the favorite to catch up with the ball first.

Then this full-speed chase sort of exploded. Lozano was suddenly and -- as it seemed -- violently propelled forward, so that he was now diving head first into the ground. As he hit the grass, head first, the T&T goalkeeper Marvin Phillip entered the picture, on the ground, sliding feet first toward Lozano, who was now sliding head first into an ugly collision.

Ugly indeed. Lozano was treated on the field for some 7 minutes, then stretchered off, straight to the hospital with nasty head injuries.

My version of the clash was that Alvin Jones had given Lozano a shove from behind that had sent him sprawling. That was also the opinion of the Spanish TV commentators, who saw an empujo clarissimo. Things seemed crystal clear. A red card for Jones, a penalty kick for Mexico, and the hospital for Lozano.

I quickly decided that goalkeeper Phillip was in no way to blame, he was merely sliding in -- not violently -- to sweep the ball away. He never got to the ball because Lozano had landed on top of it before sliding into Phillip’s knee.

Jones was the villain. It was his push from behind that sent Lozano flying toward the collision. That was when I started to locate the incident in the rare ‘brutality’ category.

But there was a problem. As you would expect, this being soccer. The Mexican players were haranguing the referee, Costa Rica’s Ricardo Montero. Because, incredibly, Montero was taking no action. No red card, no penalty -- not even a foul. Montero did manage to hand out a yellow card, though -- to Mexico’s Edson Alvarez for protesting.

Not calling the foul seemed to me a colossal referee error. As such huge mistakes are very uncommon, I ran the hell out of the replays to see if Montero had a case. Well, I’ve noticed many times in the past that a Law of Diminishing Returns operates with watching replays. The more I watch, the less certain I become. 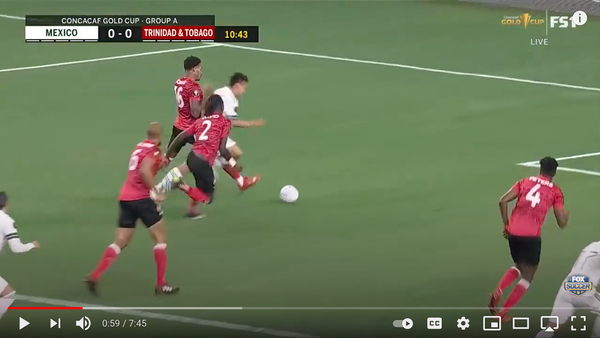 Did Jones really shove Lozano? Possibly, though it began to look more like a hefty shoulder contact. But if Jones was not guilty of a shove, there was a new charge. Tripping. Immediately before Lozano’s plunge, it is clear -- from the replays -- that Jones has his right leg across Lozano’s path. There can be no doubt about that. Mexican socks are white, T&T socks are red.

Referee Montero must have seen Lozano’s headlong sprawl, yet he ignored it. The situation was a tangled, high-speed mess -- possibly offering an excuse for Montero’s inaction, but doubly implicating Jones with a trip and either a push or nudge. But, please, were the VAR guys asleep?

The result is that Lozano will miss the rest of the Gold Cup with serious neck and facial injuries. Brutality? For once, I’d say that is the right word. After all, neither Jones’ nudge nor his trip can be considered accidental. But how can anyone be satisfied when victim Lozano needs facial surgery and is out of action for months, yet perpetrator Alvin Jones walks away unpunished?