Crazy for Football: a documentary about a team with a difference

A few years ago, psychiatric patients from all over Italy showed up in Rome to try out for a team that would head to Osaka for an international five-a-side tournament. A documentary about the players and the coaches who lead them, Crazy For Football, was released in Italy in 2016, and was only recently added to the Netflix cannon in some countries. If they can get hold of a copy, youth coaches aiming to foster a strong team spirit at the same times as raising awareness of mental health issues would do well to invite their charges round for a short evening of instructive TV. Pizza and discussion to follow the educative but very engaging 75-minute film.

The dozen players selected for the trip all have their own stories to tell. There's goalkeeper Luis, age 53, who's been on meds for depression since the age of 10. "I'm not ashamed of being crazy," he says. "If I'm crazy, I'm crazy." Any discomfort you feel at the use of the adjective is soon cleared by the players' open attitude towards their illness. They know that they don't fit in to society or conform to what it considers to be normal, but they're all keen to fit in somewhere.

"The greatest thinkers were all mad. People who invented new styles, new ideas," says Sandro, a former policeman with a heart-winning smile who tells us that, following a nervous breakdown, soccer helped him relate to others. At the end of the documentary, his coach Enrico -- a remarkable, enigmatic teacher skilled at balancing tireless motivation with just the necessary amount of discipline -- praises Sandro for volunteering in one game to stay on the bench in the interests of the team. 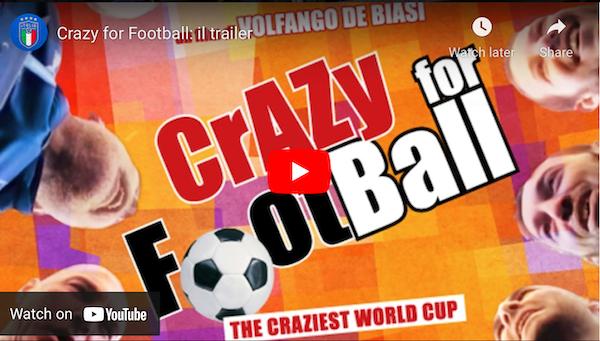 When tensions rise between one particular player, Antonio, and the rest of the team, Enrico tells the squad that "you need to give up part of yourself for the common good" to become a useful cog in the collective. They must also, he says, strive to include Antonio, even though he's a pain, because every team has them -- the whole is made up of several individual and unique parts. Assistant coach Vincenzo tells them, "Each of you has to support the others." As the movie unfolds, this task becomes a challenge more compelling than achieving results on the field.

The team also has its own psychiatrist, Santo, who says that playing soccer helps the patients emotionally connect to a time before they became ill. "They came alive," he says, "when they saw the possibility of being the same as someone else who passed them the ball, to whom they then passed it back." Striker Christian, who suffers from epilepsy, also testifies, "I like being in a group, it helps me to heal."

Once in Tokyo, the team forms a touching bond with their opponents from Peru, another group with a medley of background stories. Although only four teams are there to contest this mini 'World Cup,' the importance of representing their countries is not lost on the players. The scene where the players receive their shirts -- the exact same jerseys as worn by the official Italian team, supplied by the Italian federation -- is one of several that may bring dust to your eyes.

You'll no doubt find yourself rooting for the Italians, but it's clear from the start that the results on the field are of secondary importance. That's as it should be for every non-pro team, in every sport. We play to bond and share a common experience that keeps us healthy, that grants us the odd rush of success, but which also serves to ground us and keep us on the straight and narrow. "You grow through failure," the ex-cop Sandro tells the camera. "I've grown through failures, not through victories."

• Crazy For Football (2017) is directed by Volfango de Biasi.

italy
2 comments about "Crazy for Football: a documentary about a team with a difference".
Read more comments >
Next story loading