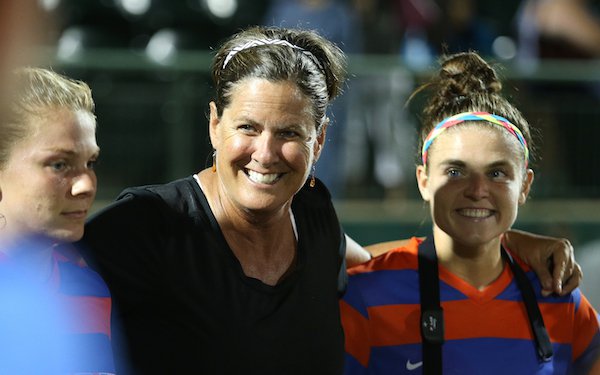 Becky Burleigh, who retired as the University of Florida head coach this spring after after 26 seasons at the helm of the Gators' program, has been named the Orlando Pride's interim head coach.

Burleigh spent 26 years as the head coach at Florida, a program she started in 1994. In 1998, the Gators won the national title with a team that featured freshman star Abby Wambach. She compiled a 513-160-46 career record with 14 SEC titles and 22 appearances in the NCAA Tournament.

“In addition to having a distinguished coaching career, Becky is among the most widely-respected leaders in our sport,” Orlando Pride executive vice president Amanda Duffy said. “Under Becky’s guidance, I’m confident that she will instill a new focus and confidence amongst the team, and strengthen the team’s existing foundation during this unique transition period for our club. Our goals and expectations for this season remain unchanged."

Alan Kirkup, Burleigh’s former associate head coach at Florida, will join her on the Pride coaching staff as an interim assistant coach. He retired from collegiate coaching last season after 15 years with the Gators. His previous experience included head coaching jobs at SMU, Maryland and Arkansas. He had a 224-137-19 record in his 18 years as a collegiate head coach.