A lackluster, error-laden performance by the USA ended with a scoreless tie against Australia that sends the Americans into the knockout stage with a second-place finish in Group G on four points -- the fewest the USA has ever earned in world championship group play. 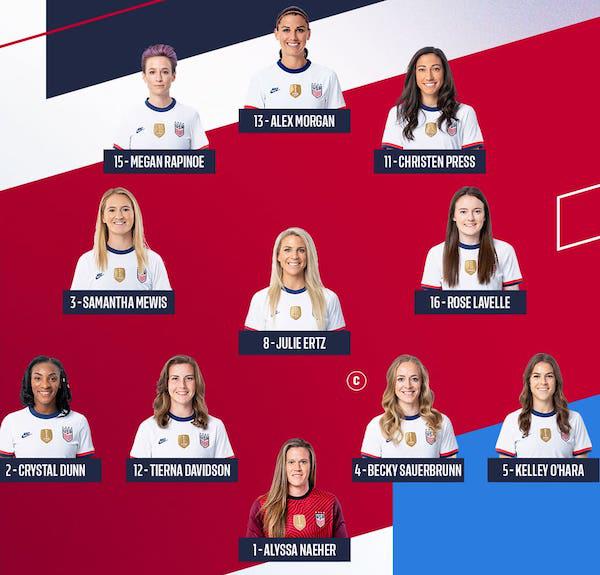 The closest Australia came to scoring was Mary Fowler's header onto the crossbar. Two other headers and one shot went straight to Alyssa Naeher.

Tierna Davidson stopped pair of Australian attacks by beating wingers to the ball in the first half and blocked a pair of shots in the second half. Australia was wise to the USA's dependence on outside back attacks and contained Crystal Dunn and Kelley O'Hara. Poor passes like Dunn's over-hit boots from midfield to Australia's goalkeeper made that task easier. Davidson's central partner Becky Sauerbrunn stepped in when necessary against an Aussie attack that fizzled with both teams satisfied to end on a tie that will assure both second-round passage.

Sam Mewis' poor passing -- she connected one of her five passes in the game's first 10 minute -- contributed to the USA's inferior possession. Rose Lavelle's one-touch pass sent Alex Morgan on a breakaway in first half during which Lavelle otherwise saw little of the ball. She shot weakly to the keeper from 19 yards in the 63rd minute and shortly after over-hit a short pass to Morgan in the penalty area. Julie Ertz denied Sam Kerr a close-range chance with a lunging tackle in the 45th minute but also failed to bring cohesion to the midfield. Ertz lost the ball at the edge of Australia's penalty area in the 39th minute on her most promising move forward.

It's now three games in a row that the USA hasn't gotten a goal from a starting forward.  Alex Morgan shot straight and weakly to the goalkeeper Teagan Micah on an 8th-minute breakaway, the USA's first chance, and from long-range in the 22nd minute. (Her 33rd-minute header into the net was nullified by a harsh millimeter offside call.) Morgan relayed a pass from Dunn to Christian Press shortly before halftime that seemed to have set up a prime chance, but Press' first touch ruined the angle from which she shot weakly to Micah. On Press' first second-half chance, after she blazed past Ellie Carpenter, she scooped the ball into Micah's arms. Megan Rapinoe posed no problems for the Australian defense and made little effort to come into the midfield for the ball. All three failed to hold the ball long enough to get the midfield involved higher up the field.

In the 89th minute, Tobin Heath moved toward the Australian goal on a last-gasp chance for the game-winner, and passed straight out of bounds for a goal kick. Heath, Lynn Williams and Carli Lloyd didn't put their fresh legs into action and watched the Australian defenders pass around as the final minutes wound down. Lindsey Horan missed on a difficult header shortly upon arrival, had a shot blocked, and played too hastily when she got the ball in midfield.

TRIVIA: The USA's first-round performance marks the first time it's been shut out twice at a world championship in group play.