Olympics: USWNT is a shadow of its former self 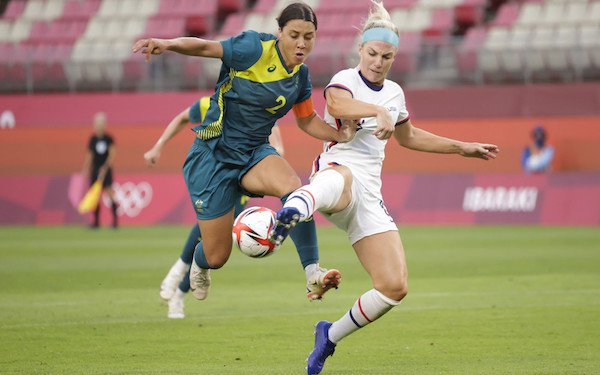 The USA is through to the quarterfinals in women's soccer at the Tokyo Olympics.

Its 0-0 tie with Australia in Kashima clinched second place in Group G and set up a date on Friday with the Netherlands in Yokohama.

That's right: USA vs. Netherlands in a rematch of the 2019 Women's World Cup final.

The Americans won that game rather convincingly. But that magical summer for the USA and its traveling army of fans, which concluded with the 2-0 victory at the Groupama Stadium outside Lyon after stops in Reims, Paris and Le Havre, seems like ages ago.

Covid has warped our sense of time.

Two years on, you'd hardly recognize the U.S. national team. Which is strange because it's almost entirely the same team. Every player Vlatko Andonovski has started in the USA's three games lifted the trophy two years ago in Décines-Charpieu.

In the last decade, the USA has won three championships -- the 2012 Olympic gold medal and 2015 and 2019 World Cup titles -- and each time it was because new players were inserted into key roles, a step up from the team that entered the previous world championship competition.

The USA came close in 2011, losing to Japan in a shootout in the World Cup final. A year later, it took gold at Wembley thanks to a 2-1 win over Japan. Alex Morgan, Tobin Heath and Kelley O'Hara didn't start a game and Megan Rapinoe was a part-time starter in Germany in 2011. In 2012, they all started almost every game.

In 2015, Becky Sauerbrunn and Julie Ertz took over in the middle of the backline for the USA, which allowed just three goals in seven games in Canada, the final two in the championship game after opening up a 4-0 lead on Japan after 16 minutes.

The USA was eliminated by Sweden in a shootout in the 2016 quarterfinals. A veteran revolt almost toppled head coach Jill Ellis, but she successfully inserted Alyssa Naeher, Abby Dahlkemper, Sam Mewis and Rose Lavelle into the starting lineup -- none played in 2016 -- and all had big roles as the USA cruised to its fourth World Cup title in France.

In 2021, Andonovski seems ready to make only one significant change -- Tierna Davidson for Dahlkemper alongside Sauerbrunn in the middle of the backline, but that is only because Dahlkemper, excellent in France, was shockingly poor in the first two games in Japan.

The USA finished the first round with four points, its fewest ever in an Olympic or World Cup group stage, and it was shut out twice in three games, matching the number of times it had been shut out in six previous Olympic tournaments, a span of 32 games.

The concern going into the Olympics was the form of the USA's five strikers. Had age caught up with the quintet of superstars, all World Cup champions in 2015 and 2019, now ages 39, 36, 33, 32 and 32? All but Christen Press had long layoffs in 2020 or 2021, and she was the only forward who played particularly well during the Olympic tune-up series.

Only Morgan and Press have scored at the Tokyo Olympics, both off the bench after New Zealand faded on Saturday.

What no one would have expected is how poorly other players like Mewis and Dahlkemper have played. Even Lavelle, so threatening in France, has struggled to have an impact.

All in all, the USA has been a shadow of its former self, the exact opposite of what it has done over the last decade, going from strength to strength.

Will gold again prove to be elusive for the U.S. women? Many of the gold-medal favorites have already been knocked off at these Olympics, so it won't come as a surprise if they don't win.

After Tuesday's 0-0 with Australia, Andonovski assessed the USA's performance: “We came with the mindset that the first goal was to win the game, and the second one was to put in a good, professional performance.”

The U.S. women didn't win the game and they didn't play well, but they got the job done -- at least it kept them alive, something you'd never think of having to say about the four-time Olympic and four-time world champions.

olympics, women's national team
43 comments about "Olympics: USWNT is a shadow of its former self".
Read more comments >
Next story loading