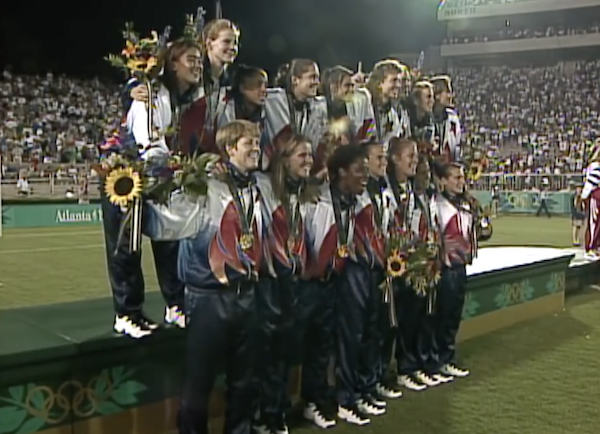 Soccer at the 1996 USA-hosted Olympics was remarkable on so many levels. A personal example:

A Thursday night doubleheader at the Orange Bowl in Miami with 55,000 fans. First, I watched the U.S. women, coached by Tony DiCicco, battle China in a game refereed by Pierluigi Collina. Then a 19-year-old Ronaldo scored against Nigeria in a match refereed by Esse Baharmast. Two games in one night that featured a couple dozen superstars: A golden generation of Nigerians – Jay Jay Okocha, Nwankwo Kanu and Co. -- who went on to win the gold medal, two former and five future Brazilian World Cup winners, including Ronaldo who later that year won his first of three FIFA World Player of the Year Awards, and of course, the U.S. women who went on to win the gold medal and the World Cup three years later.

On the men’s side -- this was the first Olympics U-23 format with three overage players -- the USA, under Coach Bruce Arena led by Claudio Reyna with Kasey Keller, Alexi Lalas and Eddie Pope, played impressively despite missing the second round with four points.

But above all, most remarkable about the 1996 Olympics was the USA’s magnificent hosting of the first women’s soccer competition at the quadrennial event whose modern version was launched in 1896.

Women first took part in 1900 Games, in golf, tennis and sailing. Four years later, the Olympics welcomed women for archery, and in 1928 for track & field. Not until 1964 did the Olympics include a women’s team sport: volleyball. Women’s basketball and team handball were introduced in 1976.

The 25th anniversary of women’s soccer at the Olympics should be celebrated. It filled stadiums for women’s soccer three years before the more famous USA-hosted 1999 Women’s World Cup. A major difference between the two tournaments was that American television virtually ignored the women’s Olympic tournament.

“NBC had totally missed the trend and the interest in women's soccer,” says Sandra Cress, who served as the ACOG (Atlanta Committee for the Olympic Games) Soccer Competition Manager.

Considering the popularity of women's soccer today, especially at the Olympics where the last two finals drew crowds of 70,454 (Rio de Janeiro 2016) and 80,203 (London 2012), it might be hard to imagine that it was difficult only 25 years ago -- after the first two Women’s World Cups in 1991 and 1995 – to convince the Olympics to include women’s soccer. FIFA President Joao Havelange and Secretary General Sepp Blatter led the charge at the perfect time, with the USA as host. 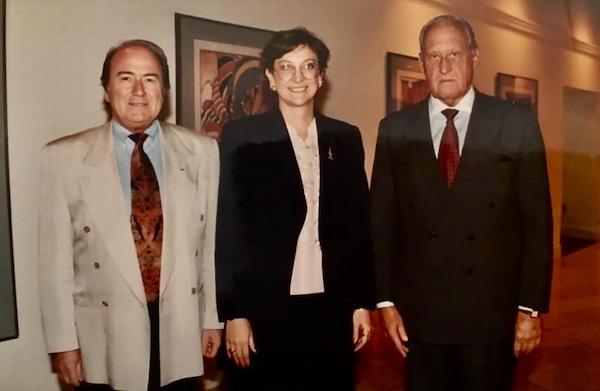 “It wasn't easy at all,” says Cress, who worked the Annapolis, Maryland, Olympics men’s soccer venue in 1984 and served as FIFA competition manager at the 1995 Women’s World Cup in Sweden. “We had to do a financial analysis of what it meant to add those athletes. There was the anxiety from the ACOG, because it was trying to make as much money as possible on ticket sales. A huge percentage of their overall tickets would be from the soccer venues. Their concern was offsetting all the costs of the hosting.”

For Cress, well-tuned to the rapid growth of soccer’s popularity -- the USA-hosted 1984 Olympics and 1994 World Cup both broke attendance records -- and Americans’ infatuation with the U.S. Olympians, was confident the soccer games would draw well. Scheduling at least one U.S. men's or women's game at each of the four first-round venues -- Birmingham, Alabama; Washington, D.C.; Orlando; Miami -- would tap into the enthusiasm of getting “a touch of the five rings.”

The negotiations also included FIFA’s concession for the finals to played outside the main city, Atlanta, whose stadium didn’t suit soccer. ACOG had enough on its hands with track & field and the closing ceremonies. That worked out well because Athens, Georgia, heartily embraced being part the Olympics for the medal rounds. The men’s semifinals at the stadium that usually hosted University of Georgia Bulldogs football games drew nearly 80,000 for both Tuesday and Wednesday night men’s semifinal games, 64,196 for the women’s semifinal doubleheader, 86,117 for the men's final two days after the women’s final that drew 76,881.

Soccer was the only sport with events outside of Georgia besides slalom canoeing that took place in Tennessee and its games drew a combination of soccer fans and those eager to witness an Olympic event. In total, more than 1.3 million attended 34 match dates, making soccer the biggest draw of the Centennial Olympic Games.

To meet soccer field width requirements, the University of Georgia even agreed to the take down the 66-year-old hedges – aka “the most famous flora in football.” Two years before the Olympics, 2,000 clippings were moved to propagate at nurseries. That too worked out well, because groundskeepers had spotted parasites on the bushes and replanted healthier hedges after the Olympics.

Both Cress and Thom Meredith, who served as the Day of Game Producer for the medal-round games but was also in on the venue bidding, recall Birmingham, Alabama’s extraordinary quest to bring games to Legion Field, famous for the other football and Bear Bryant. Switching back to natural grass was just one of their efforts. 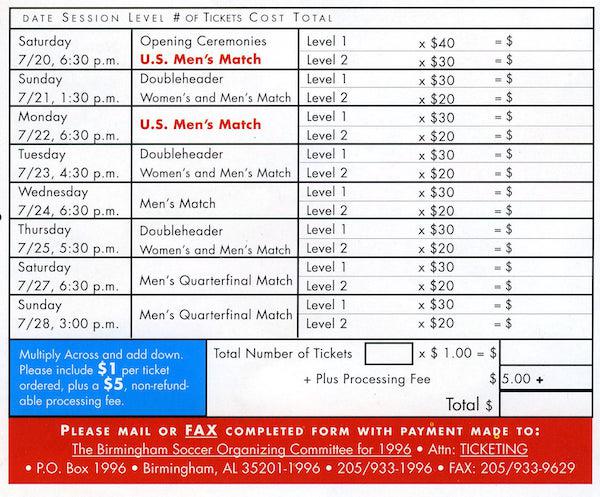 “In all the other venues, we were begging people to use their training fields,” Cress said. “In Alabama, they were getting towns to bid against each other to pay for the right to be a training site. They were so engaged and so wanted to have the best teams. After the draw, they had a private jet take the Argentine delegation to a town outside of Birmingham that could be their team's training camp site. They threw picnics for them. The media that were assigned to the Argentine team said their time in Alabama was the best time they ever had. And it put Birmingham on the soccer map for hosting U.S. national team matches in the future.”

Although certainly not known for a soccer culture, especially compared to Florida or Washington, D.C., Birmingham led the group-play venues in attendance with 244,337 for six game days.

"Soccer was unique compared to any other sport in the sense in that we had five different venues that required air flights," Cress said. "I fought to have team liaisons for each team -- usually somebody is assigned to a nation's entire congregation in the athletes' village -- so there would be someone to stay with each team, who spoke their language and could solve their problems."

For ticket sales, each venue had an organizing committee -- volunteer groups as well as ACOG staff -- and there were soccer enthusiasts and soccer clubs involved in hyping the enthusiasm, said Cress.

The only disappointment of soccer in the 1996 Olympics was that the thrills were limited to those in the stadium. During the tournament, U.S. Soccer President Alan Rothenberg called NBC’s coverage a disgrace and said, “NBC stinks, plain and simple.” Soccer America published the phone numbers of 30 NBC affiliates for fans to call for more soccer coverage. U.S. Soccer Secretary General Hank Steinbrecher lashed out at NBC, which provided interrupted coverage of the final, while interviewed on the field after the USA beat China 2-1 on goals by Shannon MacMillan and Tiffeny Milbrett.

After the final, U.S. players got congratulation calls from President Bill Clinton and First Lady Hillary Clinton -- and were swamped with TV appearance invitations. No way the mainstream media would ignore the 1999 Women’s World Cup, whose Nielsen ratings doubled ABC’s expectations. The players became household names. And now, few USA athletes at the Olympics get as much attention as its women’s soccer players.