With the same starting lineup that narrowly beat Jamaica in the quarterfinals (1-0 with an 84th-minute goal) the USA again improved after the subs arrived in the second half, and beat Qatar, 1-0 (with an 86th-minute goal). One imagines Coach Gregg Berhalter will shelve this starting lineup for the Gold Cup final on Sunday in hopes of delivering decent play much earlier in the game. 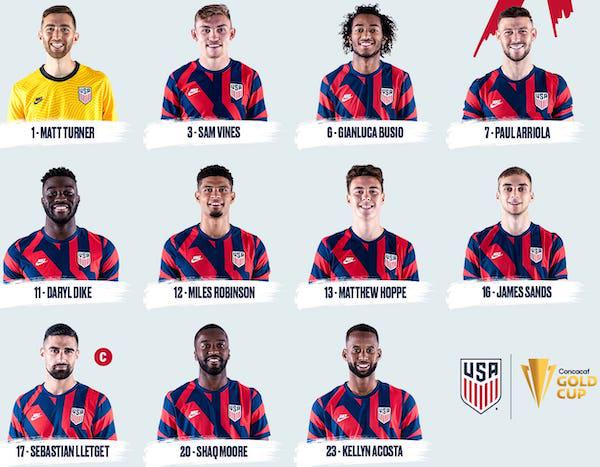 Matt Turner made a good diving save on a twice-deflected, long-range low shot in the 19th minute and soared well to tip away a Abdelaziz Hatim volley two minutes later. He needn't do anything on the penalty kick, which Hasan Al Haydos blasted high.

Thursday's win marked the USA's fourth 1-0 victory of this Gold Cup and a team with such meager offense needs a solid backline. Against Qatar, Miles Robinson looked unbeatable on the ground and in the air. His central defensive parter James Sands erred three times. On the first, a sloppy cross-field pass that went straight to Al Haydos, but Sands raced back and got in the front of Almoez Ali, who shot wide. The second was the flukish deflecting of a deflection -- it all happened in a split second -- from Boualem Khoukhi's shot that would have gone wide. Instead it forced Turner's big save. The third miscue by Sands -- who came into the game having committed zero fouls in his first three USA starts -- was a penalty-kick foul on Akram Afif. Albeit it took a close VAR intervention to detect the infraction. The USA went unpunished, though, thanks to the PK miss. Otherwise, Sands interrupted several Qatar attacks. Particularly impressive was his 10th-minute interception and surge forward to spark the USA's first attack that ended with a shot. Left back Sam Vines logged lots of mileage without making impactful contributions. Right back Shaq Moore did all he could to combine with right winger Paul Arriola, who wasn't in shape to make much of it, and set up Daryl Dike for a first-half chance with a sharp pass. Moore also made a crisp clean penalty-area tackle in the 12th minute to prevent a close-range shot.

Gianluca Busio misplayed most passes that weren't of the most basic sort and lacked the ability to beat players one-on-one down the flank. His 17th-minute shot went wide by 18 yards. Kellyn Acosta delivered a workmanlike performance and was lucky to escape without a caution for his antics during Qatar's penalty kick -- and earlier in the game for that matter. He passed out of bounds shortly before the halftime whistle when he had plenty of time and space. Sebastian Lletget went from average to outstanding when Berhalter sent in a trio of subs in 63rd minute and the USA started playing deep in Qatar's half, thanks much to Lletget's patience on the ball. He also passed the ball with his head from an interception to Nicholas Gioacchini to spark the winning-goal buildup.

For the second straight game as a starter after coming off injured in the Gold Cup opener, Paul Arriola simply did not look sharp or fit. Combined with Busio's tentative when not flawed performance, the U.S. right flank for most of the game posed no problems for Qatar. Matthew Hoppe's one shot went straight to the keeper. His mistrap of a simple pass in the 38th was a low point for Hoppe, who for an ineffective forward at least constantly sought the ball to help out the midfield during its woeful first 70 minutes. And Hoppe's pass set up one of the two Daryl Dike shots that Dike hit poorly to the goalkeeper. Dike's first touch, like when he squandered Moore's good pass, was unworthy of a national team player. But the saddest of Dike's misplays came after Sam Vines' Maradona move before a give-and-go that Dike ruined with a square pass out of bounds.

All five of the subs made cases to be starters. Granted, they may have benefitted from what looked like a fatigued Qatar team dejected after the penalty kick miss, but having Cristian Roldan and Lletget on the field together brought composure to the midfield. Nicholas Gioacchini's assist was wonderful. After getting the ball from Lletget, Gioacchini got a nifty return pass from Eryk Williamson and evaded three defenders to send in the pass that Gyasi Zardes slid onto and stabbed into the net.

TRIVIA: The USA’s eighth-straight win ties the second-longest winning streak since the team won 12 in a row from June 2 to Aug. 14, 2013.