After getting only 16 minutes of playing time in the previous three games, Lynn Williams provided the USA's best attacking performance of these Olympics. She set up the first U.S. goal and scored the second in a 2-2 tie with the Dutch. Alyssa Naeher saved two of the tiebreaker spot kicks in the shootout win that sends the USA into a semifinal against Canada. 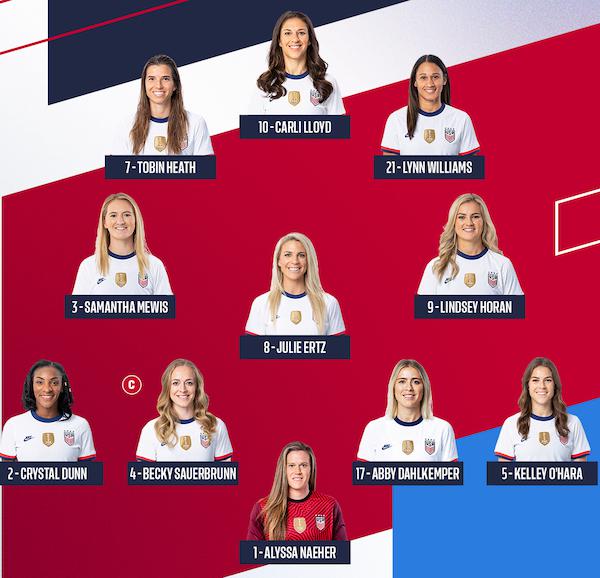 Alyssa Naeher  dived and got her hand on the long-range shot by Vivianne Miedema yet failed to block it on the second goal. But she guessed correctly and collected Lieke Martens' weakly hit penalty kick in the 81st minute to salvage the USA's medal hopes. She alertly left her line to steal the ball off Lineth Beerensteyn's feet in the 87th minute. Naeher saved the first and fourth Dutch tiebreaker spot kicks. Her quick distribution, a throw to Crystal Dunn, sparked the buildup on the first U.S. goal.

Crystal Dunn was offensively inconsistent, yet the left back's strong defensive performance (aside from an unlucky deflection of a cross ahead of the first Dutch goal) included a tackle in overtime on Beerensteyn near the goal area. Right back Kelley O’Hara mistimed her chance to interfere with Miedema on the first goal. O'Hara caused the penalty with a clumsy collision with Beerensteyn, one of her four fouls. She lobbed a cross to the keeper in first-half stoppage time despite far better options. Abby Dahlkemper's return to the lineup helped the attack with her mid- and long-distance passes. Miedema, perhaps the world's best forward, got away from Dahlkemper on the second goal and Dahlkemper gave her too much space on the first. Ultimately, Dahlkemper and central partner Becky Sauerbrunn stifled the Dutch as they surged late in the game and in overtime.

Far from a polished performance, Lindsey Horan didn't always make good use of the ball after winning it or receiving passes, like after the long Dahlkemper delivery in the 44th minute that Horan settled, before beating Lynn Wilms and passing the ball weakly to the Dutch keeper. Horan did send a pinpoint 30-yard pass, after shedding her marker, to provide Carli Lloyd a golden opportunity in the 53rd minute. Julie Ertz missed a chance to block Miedema's shot on the second goal. But the defensive work that Ertz and Horan  did prevented the Dutch midfield from providing more service to their lethal-looking frontline. And Ertz beat Jackie Groenen in the center circle, dribbled into the Dutch half to feed Sam Mewis, who relayed the ball to Lynn Williams and scored a wonderful diving header from Williams' return pass.

If the USA didn't advance, Coach Vlatko Andonovski would be remembered for his inexplicable substitution of Lynn Williams, the USA's best player during her first Olympic start. The low cross she delivered on the Mewis goal, after neatly beating Dominique Janssen, is of the kind the USA has far too few of. Williams looked up and aimed the pass rather the usual hopeful hoofed delivery we see from U.S. flank players. Three minutes later, Williams won a header off the clearance of a under-hit Tobin Heath corner kick. When the ball returned to Williams, she nailed an 11-yard half-volley into the corner of the net past keeper Sari van Veenendaal and defender Stefanie van der Gragt. In her fourth appearance and second start of the Olympics, center forward Carli Lloyd never came close to scoring her first goal of the tournament. She shot poorly twice and blew the big chance presented by Horan's pass with an awful first touch in the 53rd minute. The Dutch scored their equalizer seconds later. Heath, unable to beat defenders one-on-one, turned a promising free kick into a goal kick in the 25th minute after under-hitting a corner kick a minute earlier.

The four subs came through with converted penalty kicks after displaying various degrees of ineptness.  Megan Rapinoe, who converted the clinching spot kick, may have set an Olympic turnover record during her hour of play, in addition to bad corner kicks and free kicks. Alex Morgan's lack of pace and poor touches made defending her easy. Christian Press had two goals called back for offside. The second by a toenail but the first she could have done better to stay onside. She headed wide on another chance, passed poorly, and struggled to keep possession. Rose Lavelle didn't add to the U.S. attack.

TRIVIA: Alex Morgan and Christen Press, who converted from the spot against the Dutch, failed on their kicks when the USA fell at the 2018 Olympic Games in the tiebreaker against Sweden in the quarterfinals.