Coach Gregg Berhalter's young, mostly MLS-based players lifted the 2021 Gold Cup with a 1-0 overtime over Mexico. El Tri dominated most of the game -- 64% possession; 22 to 14 shots -- but failed to score thanks much to strong defending by the likes of Miles Robinson, who also scored the gamewinner. 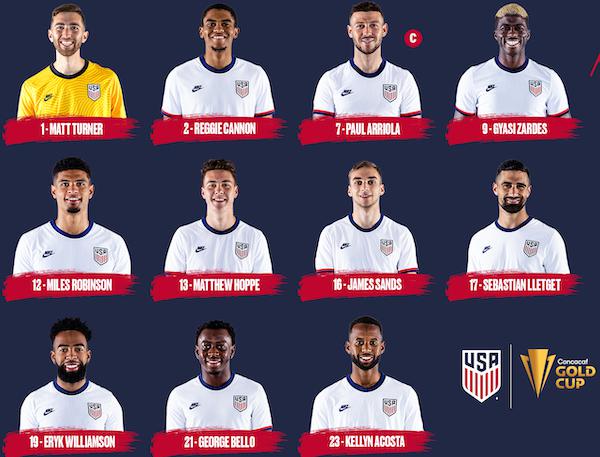 Matt Turner made an impressive full-stretch diving save on Rogelio Funes Mori's 12-yard header off a corner kick. Turner's battle with Funes Mori started in the 2nd minute when the keeper's heavy touch on a back pass nearly created a chance. Turner blocked a narrow-angle, 1-yard shot from Funes Mori with his thigh and made a diving save on an 18-yard shot with a moderate degree of difficult.

Miles Robinson did about every besides hand out game programs. He made tackles, won headers, helped out left back George Bello cope with Mexico's crafty wingers, passed sensibly -- and scored the gamewinner. Central defender James Sands had a couple lowlights, like when he lost the ball to Orbelín Pineda near the corner flag in the 48th minute (Robinson stepped in to prevent Jesus Corona from shooting into an open net.) But Sands interfered in a slew of of El Tri attacks. Reggie Cannon limited Mexico to ineffective deliveries from his flank.

Kellyn Acosta won more balls in midfield by at least twice as much as anyone else on the field, which was very important because the U.S. backline needed breaks between the waves of Mexican attacks. While the central midfielder's contributions were limited to defensive toil for most of the game, he delivered the assist from a free kick on the game-winner after a tournament in which the U.S. service on set pieces was lacking. Eryk Williamson too spent most of his time defending, had trouble winning the ball cleanly -- four fouls compared to two by Acosta, who spent 33 more minutes on the field -- and was subbed a few minutes after one of his midfield ball losses created a Mexico chance, but he also played several penetrating balls to test the nervous Mexico backline. Sebastian Lletget struggled to make an offensive impact.

In the first half, Paul Arriola hit the outside of the post from 11 yards and missed way wide from 18 yards when he had time to get closer. Arriola, who struggled one-on-one, did beat Néstor Araujo with a slick nutmeg, but then passed to a Mexican player. Better was when he robbed Carlos Salcedo at the edge of the penalty area in the 69th minute and set up a Matthew Hoppe shot, which was deflected for the second of the USA's six corner kicks. (Mexico had seven of its 11 corner kicks by then.) Gyasi Zardes shot wide in the 60th minute while one-on-one with Alfredo Talavera. (The flag went up, but if Zardes had hit the net, VAR would likely have over-ruled the AR.) Zardes whiffed on a 71st-minute Arriola cross. In the 74th minute, he tripped over the ball after Acosta's free kick cross hit him in the in the belly and Arriola blasted the ball into the head of a prone Talavera. It was a most peculiar sequence of back-to-back misses in the goal area, yet the chances signaled that the USA was picking up momentum and was capable of putting Mexico on its heels. Hoppe took a game-high (for both teams) six shots without forcing a save. It could have been fatigue from all the defending he did in the U.S. half.

Cristian Roldan set up a Zardes chance and, as Gianluca Busio would do with his later arrival, brought fresh legs into a game in which the USA looked fitter than the Mexicans for the final hour. Sam Vines and Shaq Moore continued to contain the Mexican wingers when they entered as outside backs. Nicholas Gioacchini was fouled for the free kick that led to the gamewinner.

NOTABLE: The USA won five of its six games at the Gold Cup, 1-0: vs. Haiti, Canada, Qatar, Jamaica and Mexico. The exception came with its 6-1 group-stage victory over Martinique.