Canada, despite its unimpressive offense, knocked the USA out of gold-medal contention with a 1-0 semifinal win. Besides the goal that came on a 75th-minute penalty kick, the Canadians had one shot on target, from long-range, straight to the goalkeeper. 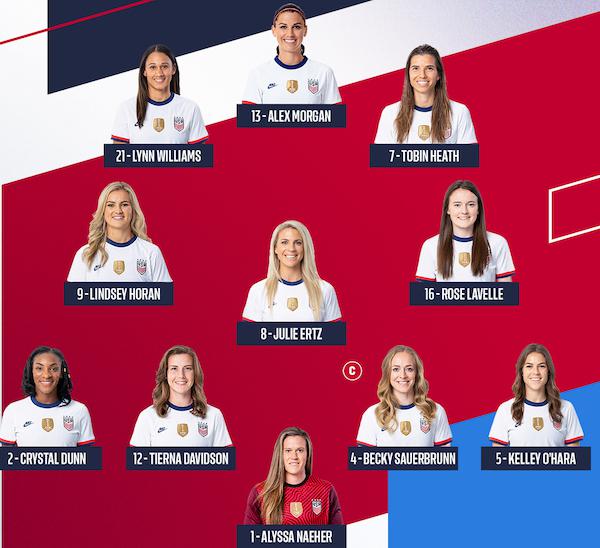 Alyssa Naeher's first test came in the 20th minute when she landed awkwardly after going up for a cross, which she caught, then bobbled while nudged by Julie Ertz. After five minutes of treatment on her leg, Naeher played for another five minutes before being replaced.

Becky Sauerbrunn cleanly tackled Nichelle Prince the first time -- one of the few times -- a Canadian charged into the U.S. penalty area. She and Tierna Davidson kept the middle safe from Canadians, although the U.S. had a propensity to give up corner kicks and throw-ins. Davidson's decent performance was marred by the penalty kick foul. Perhaps unaware of how close (and surprised how quickly) Deanne Rose was on her back, Davidson whacked the Canadian's leg while attempting to clear the ball. However unlucky it may have been, the replays VAR watched clearly showed the contact that it judged careless. The Canadians' wing play didn't present much of a challenge for Crystal Dunn and Kelley O’Hara, who was yellow-carded for a reckless tackle when she moved into the middle and failed to stop a counterattack. The outside backs attacked often, but imprecisely, in the second half after a conservative first half. Dunn smacking a ball into Tobin Heath's back while attempting a cross was indicative of how out of sync the USA played for much of the game. Dunn won corner kicks for the USA, but the Canadians had few problems defending them.

In the first half, Rose Lavelle, Julie Ertz and Lindsey Horan were usually too far from each other to sustain possession in midfield or create rhythm for the USA. They improved in the second half, but remained inconsistent. Lavelle seemed to find her grove -- as in her 56th-minute foray -- but late in game, while the USA fought for the equalizer, she took a long-range shot that reached the keeper at slow speed and over-hit a pass to the frontline that should have created a last-gasp shot. Ertz similarly mis-timed a pass in the 88th minute. Against the lowest-scoring team still alive -- Canada managed four goals in four games coming into the semifinal -- the U.S. midfield should have been able to attack much more effectively while handling defensive duties.

It was a bad sign when Alex Morgan couldn't outrun central defender Vanessa Gilles, who stole ball easily with a toe-poke when their race from the center line ended at the edge of the penalty area. Morgan's two shots were off-target headers. One of Tobin Heath's shots went out for a throw-in. Another went straight to the goalkeeper, in first-half stoppage time. The duo's performance didn't surprise considering their previous efforts at these Olympics, but Lynn Williams' game dipped severely after her superb quarterfinal outing. All three were subbed after 60 minutes.

Before Adrianna Franch had a chance to make a save, she faced the penalty kick by Fleming. Franch flew as far as possible but Fleming's shot kissed the inside of the post and hit the net. Megan Rapinoe's cross-field pass upon arriving indicated sharpness not evident in her last outing, but her miscues outnumbered her good plays, which included the cross that Carli Lloyd headed onto the top of the crossbar. Lloyd lost the ball with her early touches and clashed into a defender while mis-timing a cross. Christen Press' highlight came when she took a Lavelle pass and glided past Desiree Scott -- only to whack the ball into the next defender. She shot straight to the keeper on another long-range attempt. Whether it was the frontline starters or their replacements, a reliance on hopeful crosses and long-range shots, instead of dribbling past defenders to create better opportunities, helped doom the USA's gold-medal hopes.

NOTABLE: Three of the final four teams in the 12-team, three-group tournament came out of Group G: USA, Sweden and Australia. Canada advanced with a second-place finish in Group E, tying Japan (1-1) and Great Britain (1-1) and beating Chile (2-1). The Canadians beat Brazil in the quarterfinals in a shootout after a scoreless tie.