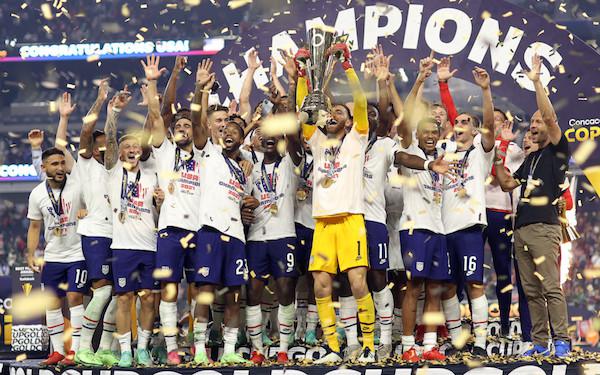 While visiting Spain for a summer years ago, I attended a bullfight. Beyond having read Ernest Hemingway, I didn’t know much about bullfighting. I watched and listened as the crowd cheered the matadors and the event finally closed with the defeated bulls being dragged out of the arena. Between the swords, horses and the elaborate costumes, the bullfight felt like an ancient art. That spell was broken somewhat when the woman sitting next to me pulled out her cell phone to update her husband. “Torearon bien, pero mataron muy mal,” she reported.

They fought well, but they killed very poorly. That’s the basic translation. All the excellent capework and the elegant stances even as the bull’s horns passed by with mere inches to spare didn’t matter in the end if the climax of the event was sloppy and prolonged because of hesitation or lack of strength or discipline to hold the sword steady and accurate for a clean, killing blow.

Watching Mexico vs. the USA in the Gold Cup final in Las Vegas' sold-out (61,514) Allegiant Stadium on Sunday night, I was reminded of that description. Time and again, El Tri, which controled the majority of the run of play, would build up nicely for a shot, but either the U.S. defense and goalkeeper Matt Turner would come up big or the final Mexico shot would be off target.

“Faltaron contundencia.” Another phrase that came to mind was one that has cropped up in the past with Mexico before. This one translates generally to lack of forcefulness, or concluding energy and finishing strength. Indeed, even when the USA had passes going awry in the final and was off target in their few counterattacking chances, they seemed energetic against Mexico all game long, though that often involved rather frantically defending much of the time.

It’s not necessarily a fair assessment of Mexico to consider it an aged team when their best young players are contending for an Olympic medal in Tokyo and therefore not at the Gold Cup. It’s also interesting to note that the star player many El Tri fans longed for Mexico coach Tata Martino to bring into this roster, Javier “Chicharito” Hernandez, wouldn’t have, at age 33, turned the dial more to youth and the team’s future. 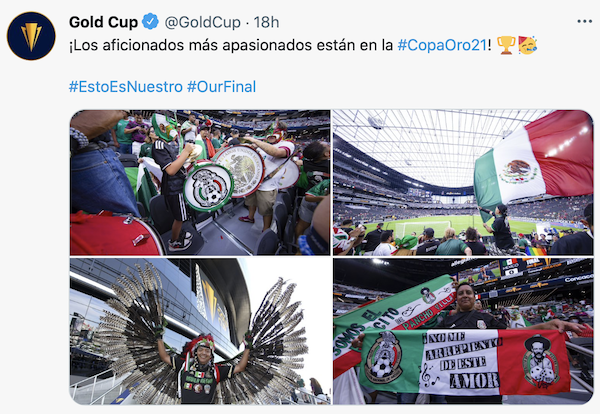 The passion of Mexico fans is evident hours before a match actually begins. For many El Tri supporters, game day is an all-day event of costuming, food and mutual celebration of family, friends and fans. The fact that a global pandemic is still ongoing puts a dent in even the most fervent festival of futbol. There were other negative elements factoring in as well for Mexico.

Though he hasn’t been called into the team in over a year, Hernandez, Mexico’s top all-time goalscorer, was by far the most popular jersey name on the many Mexico shirts being worn in Vegas. Hernandez’s absence, beloved player that he is, cast a bit of a pall on the Gold Cup squad partly because his lack of selection hasn’t really been explained by Martino, other than to say, “Javier Hernandez wasn’t in this roster because I picked other players.” Hernandez, in the midst of a stellar season with his club team, the Los Angeles Galaxy, suffered a calf injury early in July, which alleviated some of the pressure on Martino’s decision to not call him.

El Tri players also had to deal with the pressure of their own fans becoming a liability during the Gold Cup, when the recurrence of the homophobic chant by some in the crowds during the group stage and other matches, including very briefly in the final, threatened the squad with FIFA sanctions that could affect whether fan crowds are present at upcoming World Cup qualifying games.

There was also a sorrowful burden placed on the Mexican team both early and late in the Gold Cup tournament. In the debut match for Mexico, plucky Hirving “Chucky” Lozano suffered head and neck injuries in a collision with Trinidad & Tobago goalkeeper Marvin Phillip, required facial surgery, and was obviously ruled out of the tournament. Another blow hit the team last week when Zizinho, the father of midfielder Jonathan Dos Santos, died at age 59, reportedly of Covid-19 complications.

Mexico soldiered on after a dour draw in the opening game of the tournament, but never seemed to be firing on all cylinders as a team, even as it advanced. It took a moment of individual magic against Canada by Hector Herrera late in injury time for El Tri to escape that game with a victory.

Until last night, U.S. men’s national team coach Gregg Berhalter had never won against El Tri in a Gold Cup final, either as an unused player in 1998 or as coach in 2019. Both those games, the USA lost 1-0. With the youngest roster in the tournament and some questioning his tactical nous all during the tournament, Berhalter and his players finally silenced many doubters. The fact that the victory came on his 48th birthday made the triumph extra sweet.

The USA displayed an odd consistency in all their games, winning each one, 1-0, except for their game against Martinique, where they surrendered their only goal of the tournament in a 6-1 victory. Most U.S. players improved not only as the tournament went on, but in the final against Mexico, it was interesting to see some of them adjusting in real time to the skill and ability of their opponents. Though at times the U.S. players looked overwhelmed, they did just enough to prevent goals, and eventually worked well enough together to create chances. It’s likely that the American team, with less expectation to win than Mexico, played with more freedom as a result.

Walking out of the stadium almost an hour after the match concluded, I wasn’t surprised to see that the throngs of people still mingling in the parking lots were exclusively Mexico fans. Some were coordinating rides or plans, but most were sharing their own somber debriefs of the game with each other, many hands still clutching Tricolor flags.

“We played well, though. We were really aggressive early on, weren’t we? I kept thinking the next chance was going to score.”

“Matt Turner was the difference. How does the U.S. always produce such good keepers? Maybe it’s because they play basketball.”

“We need our killer instinct back. We need Chicharito to return.”

“Don’t worry. We’ll get the USA in qualifying. Tata’s going to regroup, the best players will be back together, and El Tri will come back stronger than ever.”

I couldn’t help but smile, picking up these bits of conversation. Even in the disappointment over a close loss, the passion of the Mexico supporters was always at the forefront. Long live the rivalry.