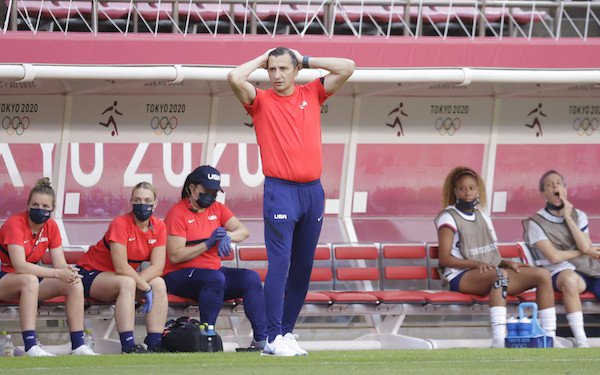 The beauty of sports is its mystery.

How do you explain the collapse of the U.S. women's national team at the Tokyo Olympics?

It was eliminated from gold-medal contention on Monday night when it fell, 1-0, to Canada. And the thing was, the defeat was not a surprise, even against a team the USA had lost to just three times in 61 meetings and not once in 20 years.

"Heading into this game," said Canada captain Christine Sinclair, "we kind of had a feeling they were ripe for the picking."

Sinclair knows a thing or two about the USA. She has been around so long that she scored the winning goal the last time Canada beat the USA when they met at the 2001 Algarve Cup.

But how did the USA go from a team that had not lost a game since January 2019 and never lost under head coach Vlatko Andonovski to a team that has just one win in five games in Japan and will finish with its worst record at a world championship no matter the outcome of the bronze-medal game.

There were warning signs all spring and through the first 10 days of the Olympics, but always just enough to grasp on to and believe the USA would still reach its goal and advance to Friday's gold-medal game in Tokyo. Instead, it's back to Kashima on Thursday to face Australia for bronze.

The first blemish in Andonovski's tenure -- after 16 wins -- came in April when it took a fortunate penalty call late in the game for the USA to earn a 1-1 tie in Stockholm.

“If we play the way we played today," Andonovski said. "It’s not good enough. And I know that. Nobody has to tell me that."

Still, nobody would have expected the rematch July 21 in Tokyo would be Sweden 3-0. 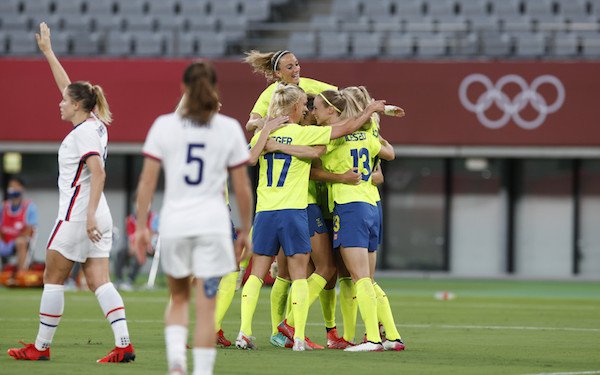 If Andonovski was looking for a reaction from his players after the Stockholm game, he got it three days later in Le Havre, where the USA beat France, 2-0. Les Bleues were missing many of their big stars because of a Covid-19 outbreak at Lyon, but they were coming off a very good win over England, 3-1.

That victory at the Stade Océane, site of the USA's last defeat in January 2019, was enough to keep the USA as firm favorites at the Olympics.

Still, signs emerged during the tune-up series played in June and early July that all was not well. The USA won all five games -- 1-0, 4-0, 2-0, 4-0 and 4-0 -- but should have blown out its weak sparring partners. In particular, Megan Rapinoe, the USA's leading scorer in 2021, and Alex Morgan, excellent against France, both played very poorly throughout the tune-up series.

Still, there were enough bright spots to believe the USA would still dominate in Japan. Christen Press was on fire, Lindsey Horan adapted well in place of the injured Julie Ertz at the No. 6, Sam Mewis was coming off a Best XI Women's Super League season at Manchester City, and Tobin Heath was back with goals in her first two games with the national team following a seven-month layoff. 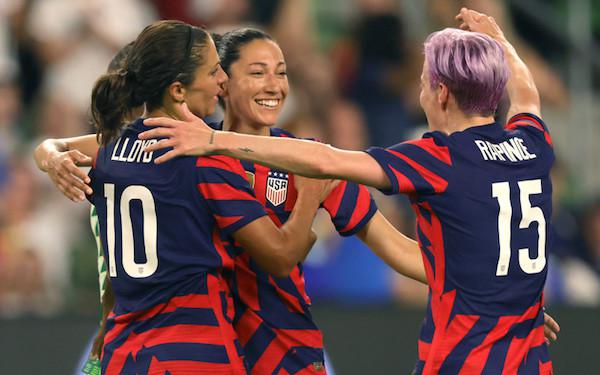 The USA also got a break when the IOC confirmed that the Olympic rosters would be expanded from 18 players and four alternates to all 22 players eligible for selection on each game's 18-player roster. If any problems cropped up in Japan, Vlatko could always dig deeper.

Rapinoe and Morgan, the USA's two biggest stars, never regained their form. But Press, Horan, Mewis and Heath all underperformed. The USA's bad form was contagious and spread throughout the team. "I think, maybe Alyssa’s the only one who's performed close to her ability," said Rapinoe after the Canada game.

That the USA even reached the semifinals was in large part due to goalkeeper Alyssa Naeher, whose save on Lieke Martens' penalty kick kept the USA-Netherlands score tied at 2-2. The USA then won the shootout over the Dutch when Naeher stopped two Dutch shooters.

The USA played its best half of the tournament in the first half against the Dutch when it took a 2-1 lead. After she set up the first goal and scored the second goal against the Netherlands, you might have figured that Lynn Williams -- originally picked as an alternate -- was the insertion of new blood the USA needed -- and has always been the winning formula for its championship teams. But she was invisible against Canada. 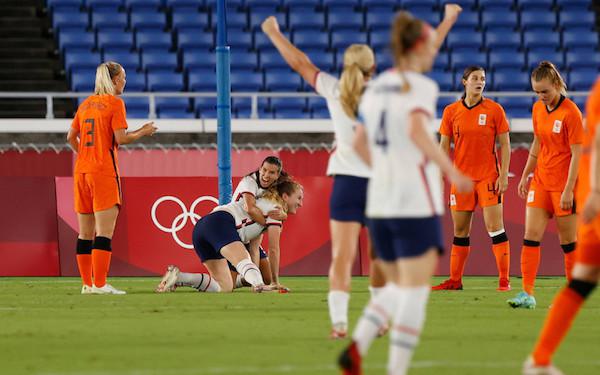 Another bright spot had been Tierna Davidson, who started against New Zealand and Australia, and returned to the starting lineup after Abby Dahlkemper, one of the best two-way defenders in the world, had another shocker defensively against the Dutch.

It was just the USA's bad luck that Davidson conceded the penalty that decided the semifinal.

In the end, Rapinoe said the players have no one to blame but themselves for their poor performances.

“We can deep dive into analyzing," she said, "but there’s all the preparation and analyzing you can do and all the tactics – and then there’s everything else. You can’t put a name on everything else, but that’s what we were missing."