FIFA and IFAB still dodging the question: Does heading have a future?

Charlotte Cowie, the English FA’s Chief Medical Officer, has just told us that research on concussion injuries funded by the by the English Football Association (among others), continues to produce “insightful data that has enabled us to make changes in the game.”


Yes, indeed. We now know, thanks to these intrepid researchers, that goalkeepers are the players least likely to develop signs of neurodegenerative disease (let’s call it dementia) in later life. Their level of dementia is about the same as that of similar age people who are not soccer players.

How insightful can you get? The research boffins have discovered that a player who rarely heads the ball suffers less from heading problems than players -- like defenders -- who may spend a 20-year career heading the ball multiple times in every game he plays.

I’m using this piece of trite ‘insight’ to underline that research, just like statistics, needs to be analyzed and assessed before its significance is declared. Simply being ‘research’ does not make it automatically either important or even correct.

And I’m not picking on Dr. Cowie. It was she who, six months back, had the guts to state with admirable clarity that heading is 'among the most likely risk factors' for causing dementia among former professionals.

Nevertheless, while Dr. Cowie is not guilty of praising the banality of the goalkeeper finding, she is very much guilty of something far more damaging. Namely, of absurd exaggeration, claiming that research has “enabled us to make changes in the game.”

That is utter nonsense. It implies that all the research that is being done on head injuries in soccer, has convinced the sport’s bosses to make changes in the way the game is played. If that is true, the changes are being carried out slowly and reluctantly, with all the speed of an arthritic tortoise.

Anyway, what are these alleged changes? A change to the game, if it is imposed from above, from FIFA or IFAB, can only take the form of a change in the rules.

Don’t be fooled. The rules of the game remain unchanged. I am not aware of any change in the rules designed to reduce the number of head injuries, to make the game safer to play. Not one.

The game is still played the way it has been played for decades, with plenty of heading in each game. Not just repeated head-to-ball contacts, but also with plenty of head-to-head clashes. While the FA gets more and more research, it somehow manages to become more of a laboratory exercise, divorced from the game on the field.

The two heads cracked violently together. The sickening sound could be heard on television. Both players went down. Jimenez stayed down for 10 minutes, until he was eased on to a stretcher and taken to the hospital with a fractured skull. 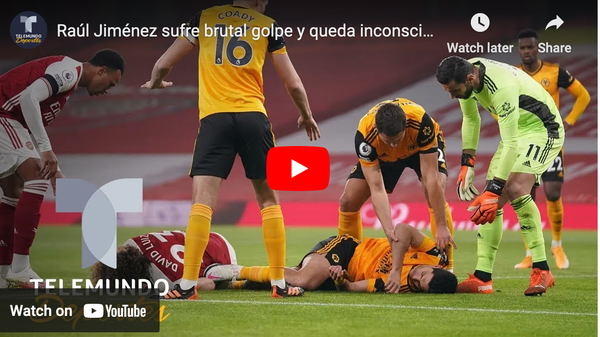 He has only just returned to the playing field. A question mark hovers over his future as a world-class goalscorer. A very scary incident for Jimenez and for soccer. But the reaction of the sport could not be measured. Because there was no reaction. A head clash? Oh, well, just a part of the game, both players trying to play the ball, no foul. Just ... unfortunate.

And all that research? Of what value is it if it cannot be used -- now -- to make the game safer? Despite Dr. Cowie, no changes to the rules of the game resulted. The incident was, in effect, ignored. the violent head clashes would continue, just a part of the game.

There is evidently a huge fear permeating the soccer atmosphere: the fear that the dangers of heading the ball may become so obvious that the practice will have to be banished from the sport. But it is a fear that no one wants to acknowledge. It is never even mentioned.

The proof of that accusation can be found in the various statements and actions of the sport itself. When, some 20 years ago, the serious long-term implications of head injuries began to be understood soccer announced its “concussion protocol,” designed to quickly assess concussions and to ensure prompt and proper treatment.

But the protocol was spottily and unreliably enforced. What it did do, rather successfully, was to mark the beginning of a sport-wide cover-up. A good deal of noise was made about the research and steps being taken to limit heading.

But none these moves had any effect on the way the game is played. The protocol only comes into action after a concussion injury has occurred. While the various regulations issued to limit heading apply only to youth soccer, or to training sessions.

The first outright ban on heading was made in 2015, in the USA, when the practice was banned in games for players under the age of 10. U.S. Soccer deserves some credit for taking the plunge, but not too much credit -- their move was made less to make the sport safer than as a way to head off a class action lawsuit. A number of “soccer families” sued the U.S. Soccer Federation (and FIFA) accusing them of failing to implement policies that would protect young players from concussions.

Six years on, we now have the FA researchers sitting on a mountain of research, virtually all of which points in one direction: that the banning of heading must be treated as a real possibility.

But the topic is never discussed, or even mentioned. The result of that silence is that soccer has entirely failed to do what it should be doing -- making rule changes designed to decrease the amount of heading during regular games.

Yet it is clear that researchers are aware of what they should be doing, even as they twist and turn to avoid doing it. The FA’s July statement, calling for a limit on headers in training sessions for professionals, focuses on what are termed “higher force” headers. These are “typically headers following a long pass (more than 35 meters) or from crosses, corners and free kicks.” (This has already been seriously criticized because the definition of such headers is based on research that seems not to have been published.

The ruling that pro players will be allowed only 10 such power headers per week of training, has also raised almost mocking doubts about just how records will be kept, and whether there will be any punishment for players who exceed the limit.

The rules of the game, of course, are unaltered. Yet the FA’s 10-header requirement shows that it is aware that one of the causes of the now suspect high-force headers are long passes -- “more than 35m [38 yards].” They are referring, of course, to aerial balls. Crosses, corner kicks and free kicks are named. But not the biggest offender, goal kicks. Long goal kicks -- most of them in the 40- to 50-yard range - are a regular feature of every game.

Nothing could be simpler than to change the rules and ban long goal kicks. The aim, lest it be forgotten, is to protect soccer players from serious head injuries. With that firmly in mind, it should not prove impossible to come up with another form of re-start.

And with that one rule change, soccer would demonstrate an active interest in reducing head injuries, even if it means changing its sacrosanct rules. And, more importantly, it would show that its study of the heading problem is not merely a matter of compiling studies and reports, but has real-life connection with the game itself, on what actually happens on the playing field.

But the FA apparently cannot bring itself to do this. It has now identified high-force headers as a problem and it has exposed long passes as a source of such headers. Yet it will not name goal kicks as the chief culprit.

I have given this topic a good deal of thought over the past two or three decades, and have written about it regularly. Yet I have no plausible explanation to offer that will explain soccer’s refusal to tackle the problem where it needs tackling first: within the game itself, within the rules.

One possibility is that bringing the topic to general attention will open an enormous can of worms. The recent FA ruling on limiting headers applies to pro players in England. An almost microscopic group among the millions who play the game worldwide. What about the millions of amateur players worldwide? Have youngsters playing on bumpy fields in Honduras or Mali or Indonesia ever heard of high-force headers? Do they know what the protocol is, do they ever get “protocol treatment”?

What is being opened up is the sad fact there is no global register of serious soccer injuries. The suspicion, surely firmly grounded, is that thousands of bad head injuries go untreated, even unreported. Even if the sport were eager to compile such a depressingly negative document, the difficulties in gathering the information, and ensuring that it is reliable, are daunting.

Understandably, the FA’s chief executive Mark Bullingham, reminds us that “it's important to remember that the overwhelming medical evidence is that football and other sports have positive impacts on both mental and physical health.”

A powerful argument. But not one that should mean soccer is allowed to ignore what ought to be a major commitment: to do everything it can to make sure that the sport is safe to play -- for professionals and for the unheralded little kids scrambling about on those bumpy fields.

I believe that, at this time, soccer is -- disgracefully -- dodging that commitment. Is it really such a Herculean effort to acknowledge that heading the ball needs a rethink? Or to stop talking vaguely about ‘35m passes’ and to identify them for what they are -- goal kicks -- and to ban them?

england
15 comments about "FIFA and IFAB still dodging the question: Does heading have a future?".
Read more comments >
Next story loading