Officiating in Euro 2020: an expert's view 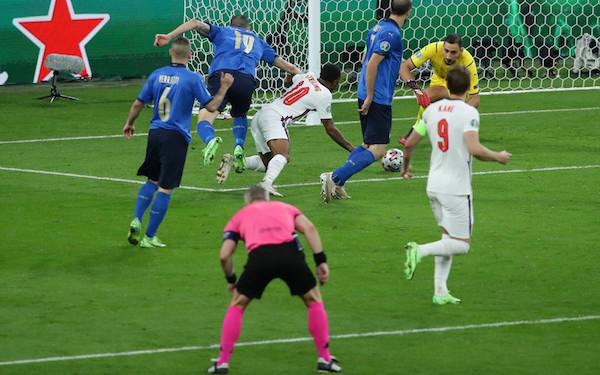 You might think that this article is a bit late. I agree, but I had to do some research before I can put out this article down for the readers of Soccer America.

There had been a lot of praise for the officiating during Euro 2020. Let us not forget that every performance is relative. When I first sat down to write this article, I watched the two semifinals of the Gold Cup. The officiating in those games were at best “unsatisfactory”. If you compare the officiating at the semifinal in Euro 2020 then … well maybe I should not use an adjective not to offend anyone. It has been always clear that both the level of soccer and officiating in UEFA is not very much comparable to the ones at CONCACAF. At his point, I should point out that the refereeing at the final of Gold Cup by Said Martinez of Honduras who is only 29 years old was very satisfying.

If we look at the refereeing at Euro 2020, we should consider two aspects of it: Refereeing and the assignment of referees.

Let us start with the assignment of referees: The refereeing in Euro 2020 was one of the better if not the best refereeing in recent years. I must admit that I watched all the knockout games but did not watch all group stage games. So, you can take some of the things I might say with a grain of salt. There was not a single game where there was a complete loss of control of the game. There were instances when a referee lost control of the game for a period but was able to get the game under control. The only instance that I remember when there was a brief mass confrontation was in the game between Switzerland and Turkey. There were some instances when the referees made mistakes in key match incidents (KMI). Either those referees did not get another game or were sent back home.

In my opinion, the best three officiated games of the tournament were Italy vs. Spain (German Felix Brych), Croatia vs. Spain (Turk Cüneyt Çakr) and Italy vs. England (Dutchman Benjamin Kuipers, photo) and in that order. If you are interested in watching refereeing at its best in a major soccer tournament you should watch the semifinal Brych refereed over and over. His performance at the semifinal and quarterfinal games were unbelievable. Especially when I thought that after the Belgium-Portugal game in which for about 20-25 minutes, he partially lost control of the game that he will not get another game, I was flabbergasted by the fact that he got two more games and his later performances in those games. Once I did some research and found out how the refereeing assignments are done in a major tournament, then it became obvious why he was assigned a quarterfinal and semifinal game. I will explain the philosophy of assignments later. By the way Dr. Brych is the only referee who had five assignments. Kuipers and Danny Makkalie had four each and the rest had three or less assignments. Some of them were unfortunate to referee one game and send home like Grinfeeld and Kovacs.

“1. Experience hosting at a previous international tournament, such as a Euros or World Cup
2. A record of officiating high-profile Champions League and Europa League fixtures
3. Track record in domestic football (match performance, level of discipline, number of mistakes made)
3. Experience working with video assistance domestically
4. Languages spoken (a good grasp of English is a must)
5. Ability to control players and clearly explain decisions
6. How many referees from same nation already selected?”

This is a clear combination of both merit and performance. The same principles applied during the tournament. Merit meant the referee’s performance over the years especially during the last year or two. Performance was the performance during the tournament. For UEFA, the key point in performance was the performance on the field regarding KMIs. UEFA did not want referees to award “soft” penalties or show “easy” red cards. That is why Antonio Luhoz who is one of the best referees in Europe and who had recently refereed the Champions League final with a great success was sent home when he awarded a “soft” penalty in the game between Portugal and France. Michael Oliver did not get a game after a very “easy” red card in the game between Switzerland and Spain. It was clear that for UEFA game control was important but was not the most important issue unless we had the Battle of Nuremberg (Portugal vs. Netherlands) of the 2006 World Cup. This is the reason why Dr. Brych had two more games even though he partially missed control of the Belgium-Portugal game. His merit outclassed his shaky performance in one game. UEFA believed in his merit so much that they assigned him to both quarterfinal and semifinal games and he aced them both. UEFA did not have any issues assigning the same referee to the same team; Makkalie refereed Ukraine vs. England in the quarterfinals and England vs. Denmark in the semifinals.

One might ask why UEFA does not want “soft” penalties or “easy” red cards? Well, these are the unwritten Laws of the Game which I will soon write an article about.

For the refereeing part, UEFA clearly wanted the following:

Before we go and have a look at the use of VAR system, let us have a look at the other four areas. It is clear that, less fouls called, and less yellow cards used does not mean less fouls were committed, or less yellow card offences occurred. Referees whistled more obvious fouls – not trifling one – and tried to call only those offenses that required a yellow card – without the need of referee interpretation like removing the shirt of a player for celebrating a goal – and tried to use the others later in the game for game control. That meant along with an efficient VAR system more effective playing time. This is what professional football expects from the referees.

To discourage defenders from committing fouls in their penalty area, use of the correct VAR system meant more penalty kicks. (I just want to remind the readers that due to the VAR system off-the-ball violent conduct disappeared from the game.)

More efficient use of the VAR system meant there were only five on-field reviews in 51 games. Nearly one in 10 games. That is how the system was supposed to work. Unfortunately, in some leagues there is one OFR in two games. The best example of a non-interference by VAR is the “soft’ penalty called against Denmark by Makkalie during the semifinal game which changed the outcome of the game. Makala awarded a penalty kick from a good angle seeing a minor contact by a Danish defender. In this situation according to the correct implementation of the VAR protocol, VAR should ask the referee what he saw. If the referee says there was contact by the defender and the video supports this fact, there is nothing VAR can do. The subjective decision of whether the power of the contact warranted a penalty kick is a decision that the referee must make.

The efficiency and the speed of the VAR system – less time lost in the process - in judging offside calls were improved by utilizing three AVARs and two technical staff in the VAR booth.

I hope that readers can understand the logic behind referee appointments and what was expected of the referees during the tournament.