A roadmap for U.S. women's soccer emerges from Olympic failure

The Victory Tour this year will be more of a Farewell Tour.

That’s not really a bad thing. The U.S. women’s soccer team is full of older players who, no matter how they played in Japan over the past two weeks, have a long list of accomplishments worth celebrating. And we should treat it as if it really is the end and not one of a boxer’s “retirement” fights or an Eagles tour.

In the mid-2000s, women’s soccer in the USA was in the doldrums. The WUSA had failed, and nothing replaced it. Winning the 2008 Olympics helped, but the Olympic spotlight is shared with so many, and we didn’t really see things pick up until a breathtaking 2011 World Cup. The 2012 Olympic gold medal required a bit of a fortunate call in the semifinals, an incident that provided a revenge storyline for Canada this week, but comprehensive wins in the 2015 World Cup semifinal and final would’ve been enough to these players’ legacies no matter what happened after that.

A lot of that success is due to the stars of the 4-3 win over Australia in the bronze-medal game: Megan Rapinoe, who may have been overrated in recent years but was underrated long before that, and Carli Lloyd, who has scored some of the most important goals in women’s soccer history -- some scrappy, some spectacular. Alex Morgan has been one of the most dangerous strikers the game has ever seen. Becky Sauerbrunn never got the recognition she deserved because she simply locked down the defense rather than coming forward to score goals. Tobin Heath and Christen Press raised the bar for the skill level to which young players should aspire.

So make the rounds one more time, with the hopes that we’ll have enough vaccinated people and masks to turn back the Delta variant and allow big crowds to give them the ovations they deserve.

Then it’ll be time to face the future.

We’ve learned now that mere tinkering doesn’t work. It’s not just these particular players. It’s a system that has grown stale, something we’ve seen over the years but was glossed over when the team managed to win one more championship in 2019.

In the long run, a loss in the Olympics may be what the U.S. women’s soccer program needed. The questions that needed to be asked outside of back-channel whispers may finally be asked by people who are no longer star-struck by the mere sight of a Rapinoe or a Morgan.

The system -- indeed, the women’s soccer community as a whole -- has spent too much time celebrating the wrong things. Legacies in soccer aren’t supposed to be made in friendlies, where players rack up gaudy numbers of caps and goals.

To U.S. Soccer’s credit, they’ve made efforts to make some friendlies more important than others by creating events such as the SheBelieves Cup -- only to be excoriated in legal arguments for not making the SheBelieves Cup the equal of the men’s Gold Cup or Copa America. But the federation and the team are both complicit in treating this team as a traveling circus in which the stars -- making an annual salary that limited their coaches’ capacity to replace them -- play all the time. 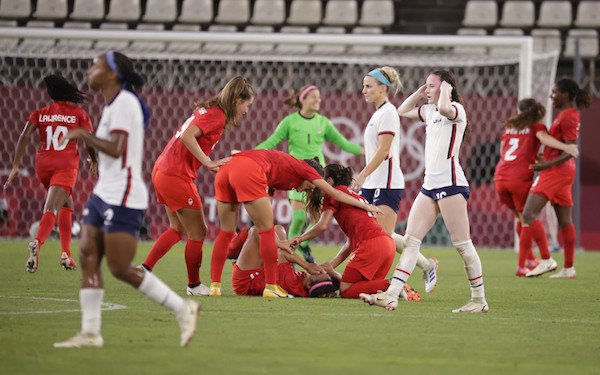 Vlatko Andonovski deserves a chance to rebuild this team, with open competition for places. But it’s not as simple as saying Andonovski needs to get younger players. In too many cases, those players don’t exist. That might change as the NWSL continues its growth, though it would still be nice if all the pundits and sponsors bleating “equal pay” would notice the league’s existence, but the USA has simply fallen behind in terms of development.

These are all things that can be addressed in part with the next collective bargaining agreement. Lest we forget, the current CBA expires in five months. It’s just difficult to talk about future pay when the current team refuses to accept legal and economic reality about back pay.

It’s going to take a partnership to move forward. That doesn’t mean a hilariously hollow amicus brief from the U.S. men’s national team union as the women continue to try to use the men’s deal, which basically said, “Oh, sure, if you win the World Cup, you’ll get eleventy billion dollars because FIFA will pay us infinity billion dollars,” as the benchmark for what they should’ve made in the past. That doesn’t mean releasing a misleading documentary on HBO on the eve of the Olympics.

It’ll take the men, the women and the federation (and maybe sponsors) figuring out how to invest in development and share the benefits of FIFA and Concacaf prize money even as FIFA and Concacaf aren’t even close to offering the same bonus equity that other sports have managed to figure out. The men have no foundation from which to preach until they join forces with the women and negotiate together.

It might even take losing a friendly or playing a game without all of the big names, all in the name of expanding the player pool so that the team is no longer reliant on the same players who did very well in the past but are no longer at that level.

The Olympics have given us all a dose of reality. Teams aren’t going to shudder in fear when they look across the field and see a bunch of celebrities wearing whatever combination of red, white and blue Nike has concocted this year. Sweden and Canada both knew they could beat the USA using different styles -- Sweden with a “damn the torpedoes” approach, Canada with a more patient approach. The Netherlands knew, perhaps a bit more confidently than in 2019, that they had the players who could compete with the vaunted Americans.

How we adapt to that reality may determine whether the team’s 2023 experiences will resemble 2019 or 2021.