Veteran forwards Carli Lloyd and Megan Rapinoe, scoreless in the first five Olympic matches, each scored twice in the 4-3 win that earned the USA the bronze medal. 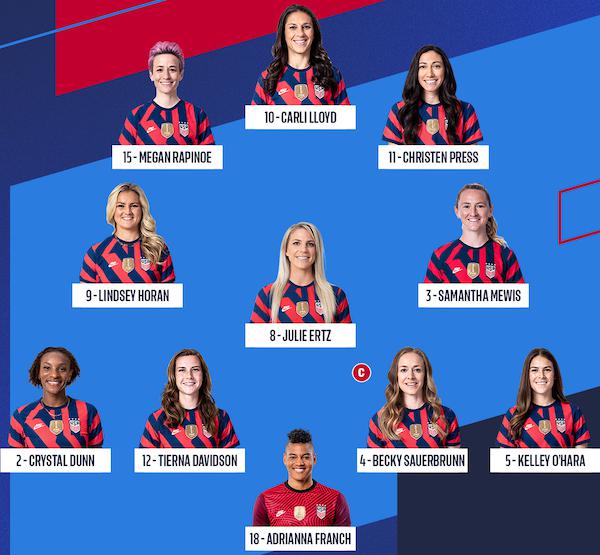 Sam Kerr scored Australia's first goal with a crisp shot that Adrianna Franch got her arm on but failed to block, and Franch was beaten from 25 yards by Emily Gielnik.

Tierna Davidson stifled an early Australia counterattack but her intercepted pass through the middle led to Australia's first goal. Her central partner Becky Sauerbrunn was the only backline member to go flawless during the game. After left back Crystal Dunn set up the Christen Press shot that forced the corner kick for the USA's first goal, her offensive contributions were limited and in the 54th minute she headed the ball into the middle for Kyah Simon to assist on Caitlin Foord's goal. Right back Kelley O’Hara lost the ball in midfield, leading to Australia's late third goal.

Lindsey Horan forged through a tackle and set up Carli Lloyd's first goal and provided Lloyd a prime chance to get the hat trick (shot saved by keeper Teagan Micah). Horan, who blocked a shot in stoppage time to help preserve the lead, Julie Ertz and Sam Mewis prevented the Australian midfield from providing significant service to the frontline.

Two of Christen Press' shots forced saves. The first for a corner kick from which Megan Rapinoe opened the scoring with a Gol Olimpico. Rapinoe made the most of a gift clearance from Alanna Kennedy with a sharp volley to put the USA back in the lead for good at 2-1. Carli Lloyd scored her first with a powerful half-volley and nutmegged Micah for her second goal.

Alex Morgan failed to beat Micah one-on-one in the 87th minute. The U.S. attack caused fewer problems for Australia after Tobin Heath and Rose Lavelle came on in the 61st minute.

TRIVIA: Scoring straight from a corner kick -- as Megan Rapinoe did to give the USA a 1-0 lead -- was dubbed a "gol olimpico" when Uruguay, fresh off winning the 1924 Olympic gold medal, lost a friendly to Argentina thanks to Cesareo Onzari's strike in such manner.