Remembering the great Gerd Mueller: A goalscorer like no other

One of my favorite parts of interviewing people in the soccer world is to hear how they fell in love with the game. How this simple sport enchanted them so much that it would become a major of part of their lives.

When the great German striker Gerd Müller died on Sunday at the age of 75, it bought back a stream of my own memories, starting with a visit to my grandparents in Hamburg in the summer of 1970, when I was 6 years old. The World Cup was being played in Mexico, and Müller scored 10 goals as West Germany finished third.

When we returned to Texas, my father found a youth soccer team for me and I pretended to be Gerd Müller whenever I stepped on the field. When we played in the backyard, I would have my father toss the ball to me in a way so I could volley shots into the goal how Müller scored the overtime gamewinner against England in the quarterfinals. (Two perfectly positioned trees served as our backyard goal.)

Four years later, during another summer spent in Hamburg, West Germany hosted the World Cup. Waiting for me upon my arrival was a fantastic gift from my Opa: “Ernst Huberty’s Die Fussball-Weltmeisterschaften 1996-1970-1974.” The book was published by Sprengel food company, whose milk chocolate bars came with the stickers that we would add to their corresponding spots to complete a colorful chronicle of two past World Cup -- and the 1974 tournament during which Müller scored the final-winning goal over the Netherlands. 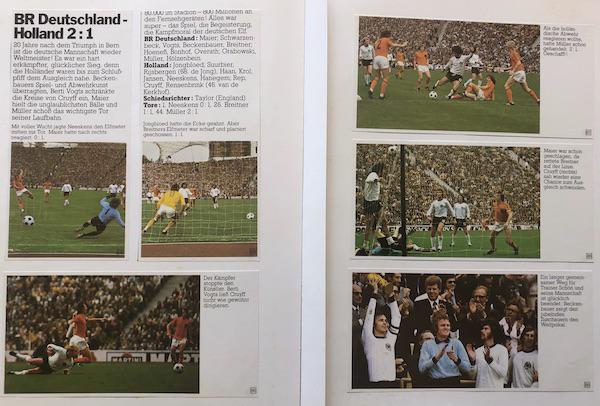 Between the two World Cups, Müller helped West Germany win the 1972 European Championship. He scored twice in both the Germans’ semifinal win over Belgium and their final win over the Soviet Union. He also scored in West Germany’s famous 3-1 quarterfinal win over England in Wembley.

At age 28, three days before the 1974 World Cup final, Müller had told Coach Helmut Schön he would retire after the tournament. It required too much time away from his family – his daughter, Nicole, was 3 at the time – a situation exacerbated by the German federation's strict sequestering of the team.

Müller’s record of 14 World Cup goals (in 13 games over two tournaments) held until  2006 when Brazil’s Ronaldo, playing in his third World Cup, scored his 15th goal (over 19 games). Germany’s Miroslav Kloese holds the current record: 16 goals in 24 games in four World Cups. Müller’s 1970 feat remains the last time a player scored double-digit goals in a single tournament. The two previous double-digit scorers were Hungary’s Sandor Koscis with 11 in 1954 and France’s Just Fointaine’s 13 in 1958. It must be noted that Mueller’s incredible scoring rate came after soccer had become much more tactically defensive. The goals-per-game average at the 1954 and 1958 World Cups were 5.38 and 3.60, respectively, after which it never again reached the 3.0 mark.

“When we started at Bayern,” said Franz Beckenbauer, “our clubhouse was a wooden shack. Without Gerd, we’d probably still be in the wooden shack.”

Müller had joined Beckenbauer and Sepp Maier at Bayern from hometown club TSV 1861 Nördlingen in 1964 when Bayern was in Regionalliga Süd. Then-Bayern coach Zlatko Cajkovski  famously dubbed him “short, fat Müller” before his 33 goals in 26 games helped it win promotion to the Bundesliga after the first season. 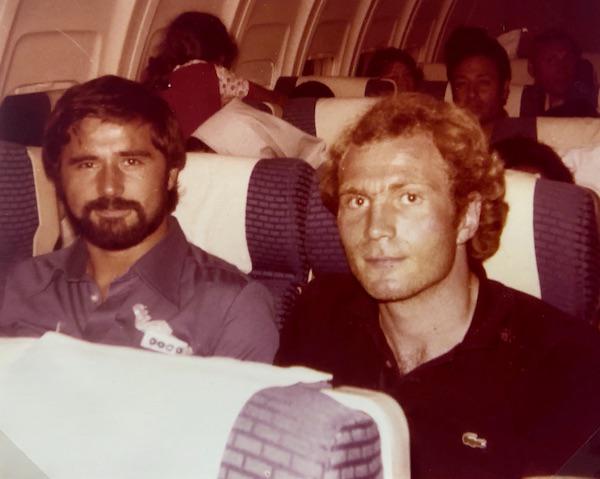 After our 1974 visit to Germany, we moved to Hawaii and we would keep track of the Bundesliga with my dad’s shortwave radio and newspaper clippings mailed by my grandfather.

In 1977, my mom, my sister – who named one of her dolls after Müller’s daughter – and I flew from Hawaii to Germany via Los Angeles. As other passengers entered the plane at LAX, I mentioned to my mom that one of them looked a lot like the central defender Georg Schwarzenbeck. By the time Uli Hoeness, Maier and Müller came on board, it became clear that Bayern Munich would be on our 11-hour flight. They'd played a friendly against the Mexican national team at the L.A. Coliseum.

Hoeness and Müller sat next to each other and played cards. A few hours into the flight I approached Coach Dettmar Cramer, who said he remembered me from when my father took his C license from Cramer in Dallas in 1972. At one point Müller stopped by our aisle, chatted with us, and agreed gladly to my autograph request.

After my dad joined us in Germany, we attended a Bayern Munich practice. While my dad reunited with Cramer afterward, I told Maier that we shared the same birthday. He told me to wait while he went on the team bus. He returned with tickets to the weekend’s game. We enjoyed a 4-2 Bayern win over St. Pauli in which Müller scored all four goals.

In 1979, Müller left Bayern for the Fort Lauderdale Strikers. In 1980, he faced Beckenbauer in the NASL Soccer Bowl as they finished runner-up to the Cosmos. In three seasons, Müller scored 38 goals in 71 NASL games.

Upon his return to Germany, Müller struggled with alcoholism until Hoeness, by then Bayern’s general manager, helped Müller on the path to recovery and hired him as a club ambassador, from which moved on to become a Bayern scout and then Bayern youth coach. He had suffered from Alzheimer’s before his death last weekend. 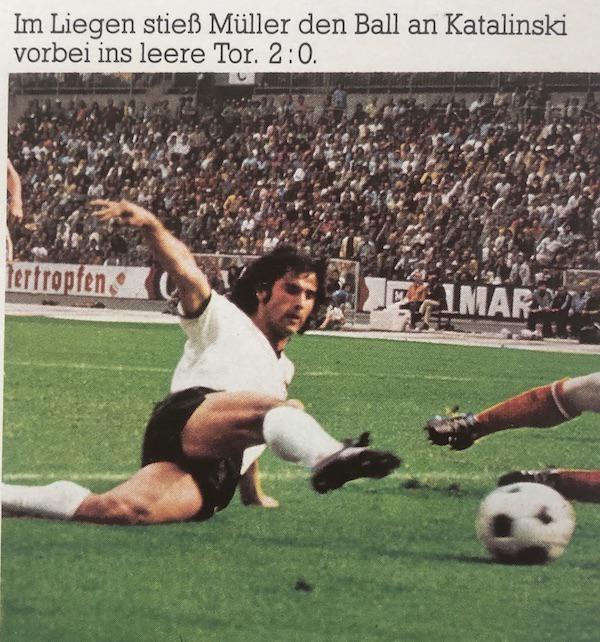 Back in the 1970s, I’d constantly flip through my collection of World Cup books and admire the photos of the Müller goals that came from all sorts of positions. It didn’t matter how the ball arrived, he found a way to send it into the net. I loved his diving headers, his volleys, how he pounced lighting quick to blast a rebound into the net. How he could unleash a shot after a quick turn. He could score goals while the ground, like he did against Yugoslavia during the 1974 World Cup.

Young American soccer players today have no shortage of star players to emulate and can re-watch highlight videos of their favorite players by pulling out their smart phones – besides the seemingly non-stop soccer on television. Long, long before YouTube and Twitter, I could replay so many of Müller’s most famous goals in my head. And for all reasons that I enjoy soccer, it's the goalscoring that I admire most. A joy that I trace back to the good fortune of watching the great Gerd Müller when I was 6 years old.

germany
18 comments about "Remembering the great Gerd Mueller: A goalscorer like no other".
Read more comments >
Next story loading