Soccer: A sport handicapped by its own lack of vision

UEFA has ditched the away-goals rule. Good news or bad news? Neither, really. Simply a matter of facing up to the facts. Not for the first time in this handicapped sport, what looked like a good idea has not worked out.

The good idea was always, at least partially, misrepresented. In the home-and-away games, the away team was now being encouraged to score goals.

A positive message that masked a more negative aim: simply to stop the away teams from playing a heavily defensive game, determined not to concede any goals. A 0-0 tie might bore everyone to sleep, but it was still a good result for the away team.

The stats -- at least the ones that I’ve read about -- make it clear that the away-goals rule did not bring about a glut of away goals. If anything, away-goals seem to have slightly diminished. That might well have been because the home teams played more defensively to prevent away goals -- is there any deluded soul left anywhere who fails to grasp that the sport actually favors and rewards negative soccer. Or it might have been because goalscoring in soccer has anyway been on a downward curve for decades now.

In the first paragraph of this column I used the phrase “this handicapped sport.” I do consider soccer to be handicapped, a sport held back, and therefore a sport unable to deliver its full promise.

Sad enough, but doubly, and triply sad when the truth dawns: this crippling handicap is self-administered. It comes from within the sport itself, from the very top levels. From FIFA, ultimately responsible for every aspect of the sport, but more specifically from IFAB -- the International Football Association Board, whose vital job is to ensure both the integrity and the relevance of the game’s rules.

I have heaped plenty of criticism on IFAB over the years. Suffice to say that IFAB was created over 100 years ago, in the 19th century, and has had great difficulty lumbering into the 20th. Forget about the 21st.

For most of its regrettable existence it has considered itself the “guardian” of the rules. Not a bad role, that, but IFAB turned it into a disaster for the sport by giving it the narrowest possible interpretation. IFAB adopted the miserly view that its job was to preserve the rules, to resist change. Thus the rules became increasingly divorced from the reality of a changing game.

Oh yes, changes were made, but they were invariably minor, and often a decade or so later than they should have been made. The impression given was that IFAB was very much asleep at the wheel.

My specific gripe in this column is that IFAB -- by inaction -- has allowed the sport to drift into a low-scoring game dominated by defensive tactics. A game in which the increasingly frequent 0-0 tie can be hailed as “fascinating” or “intriguing” because of its tactical complexities.

When the glaring truth is that a 0-0 tie is usually a colossal bore.

Did IFAB even notice that goals -- the very lifeblood, the red corpuscles, of the game -- were disappearing? I’m not sure that it did. I don’t think that IFAB ever considered that it should take notice, or that it had a vital role to play -- with intelligent alterations to the rules -- to make sure that soccer did not allow the defensive side of the game to dominate the attacking side.

U.S. sports do much better, knowing when to rein in either pitchers or hitters when they become too dominant, or to beef up protection for quarterbacks -- in the name of maintaining a lively, entertaining and balanced sport.

IFAB has never bothered about such matters, so soccer has become the game recently on display in the Olympic games. Where both men’s semifinals went to overtime, giving us four hours of supposedly top level soccer ... and just one goal.

Since then, I’ve watched Spurs and Manchester City, two of the Premier League’s top teams, both struggle to score -- another far-from-riveting 1-0 game.

If the news hasn’t reached IFAB by now, then it never will. The sport is dangerously unbalanced -- to the point where there are not enough goals scored to decide games. So comes the ultimate indignity, the introduction of the tawdry, cheap gimmick known as the shootout. In which fake goals are scored to decide real games -- even the World Cup final itself.

Throughout this whole melancholy slide into scoring sterility, IFAB has sat idly by, twiddling its thumbs as creeping boredom overtook the sport.

A few slight amendments have been made to encourage scoring. The away-goal rule was one such experiment. As usual, too late. By then the sport itself was virtually immune to such feeble ventures. The game was firmly in the grip of those who believed in defensive attitudes, defensive play, and, of course, defensive tactics. Swept up in this tide of pro-defensive thinking were the referees, who adapted by showing leniency towards defensive play and players. More than one referee has told me “When there’s any doubt over a call, you give the benefit of that doubt to the defender.”

But no referee has ever been able to tell me where that rule-of-thumb came from. It’s certainly never been in the rulebook. Though I suspect it has featured at referee instruction courses.

It is with the reversal of such pernicious attitudes that the real struggle to bring back goals to soccer must begin. 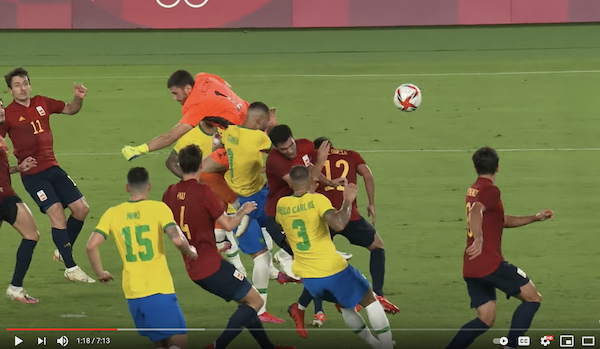 These old attitudes are still to be seen. In the 36th minute of the Olympic final between Spain and Brazil, Spanish goalkeeper Unai Simon came racing forward and leapt into a crowd of players to punch the ball away. He did not get to the ball, but he did smash Brazilian forward Cunha to the ground.

The game paused while Cunha was treated, then Australian referee Chris Beath restarted with a free kick to Spain -- having adjudged that Cunha had somehow fouled Simon. A blatantly ridiculous call, but one that we’re accustomed to seeing.

But Beath was soon looking at the field-side monitor. He ran back on to the field, signaling a penalty kick to Brazil. VAR to the rescue! The correct -- and obviously correct -- call was made. Richarlison then rather spoiled the episode by belting his penalty kick way over the bar. 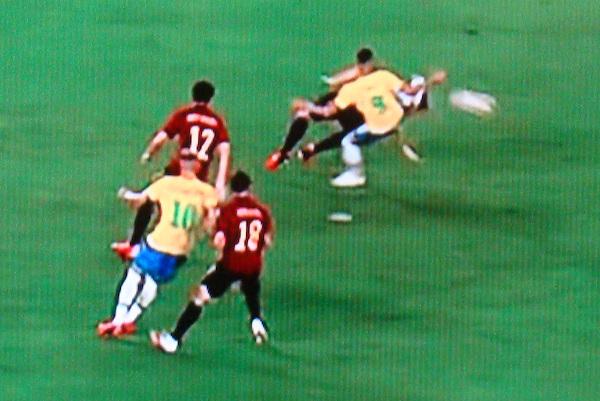 Referee Beath came up with another shockingly bad decision in the second half. A Brazilian pass came into the Spanish area at about thigh-height. Cunha saw a chance for a shot on goal and shaped to make his kick. At the same time, Spanish defender Pau Torres, attempted to clear the ball -- not by kicking it, but by diving forward and low to head it.

That’s when Beath should have whistled, calling Pau for playing “in a dangerous manner.” Beath delayed his whistle a few seconds, until Cunha’s foot had made glancing contact with Pau’s head. He then penalized Cunha. My impression was that Cunha tried to pull out of making his kick, but was only partially successful.

Beath’s call was quite wrong. The danger in this situation came from Pau, from his decision to stoop low (to an area that belongs to the feet) to head a ball. Brazil should have been given an indirect free kick. Far from it. Cunha got a yellow card.

This is particularly brainless bias, because the rule to punish dangerous play is already there. Evidently, it needs to be ruthlessly enforced. Until it is, mild maneuvers to boost goalscoring -- like the away-goals rule -- will continue to fall upon stony ground.

In the modern game -- the game that IFAB has allowed to develop -- it’s simply too easy to suffocate scoring.

referees
18 comments about "Soccer: A sport handicapped by its own lack of vision".
Read more comments >
Next story loading