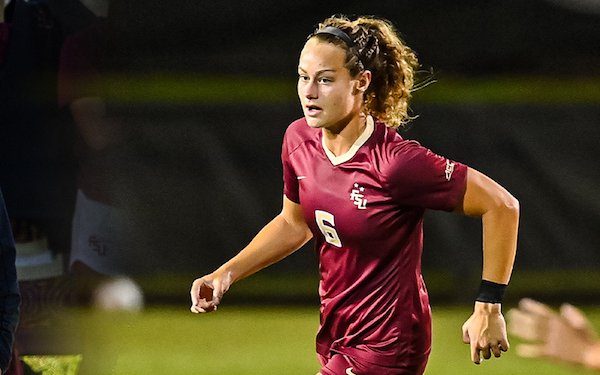 Florida State's Jaelin Howell, the 2020-21 Hermann Trophy winner, is one of several players on SA's 2021 Women's College Preseason All-America Team that the U.S. national team coaching staff will be looking at closely this fall.

What makes the 2021 college season unique is the NCAA granted all players an extra year of eligibility due the disruption caused last season by the COVID-19 pandemic. Four players on our Preseason All-America Team are returning for their fifth college season.

Goalkeeper
Claudia Dickey, North Carolina, Senior
Played every minute of every game in goal in 2020-21 ... Earned All-ACC honors in fall 2020 when Carolina was the ACC runner-up ... Anchored a rebuilt defense in spring 2021, recording seven shutout wins in seven games before the 3-1 loss to eventual champion Santa Clara in the College Cup semifinals.

Defenders
Maycee Bell, North Carolina, Junior.
Was named the 2019 ACC Freshman of the Year and enjoyed a great fall 2020 season but didn't play until the NCAA Tournament quarterfinals in the spring because of an injury ... Was called into Vlatko Andonovski's ID camp for senior national team players shortly after he took the women's job in 2019.

Naomi Girma, Stanford, Junior.
Forced to redshirt in spring 2021 after captaining the Cardinal to the 2019 national championship ... Attended senior national team camps in 2019 and 2020 when she was named the U.S. Young Female Player of the Year.

*Alexa Loera, Santa Clara, Senior.
Named the Defensive Most Outstanding Player at the College Cup in May when the Broncos won the national title ... Joins classmate Kelsey Turnbow in returning for a fifth year after being drafted in 2021 NWSL College Draft.

*Mijke Roelfsema, Rice, Senior.
Led the Owls to the NCAA Tournament round of 16 for the first time ever ... Picked as the Conference USA Defender of the Year in her second season at Rice ... Played her freshman and sophomore seasons at Boston College after arriving from the Netherlands.

Midfielders
*Mikayla Colohan, BYU, Senior.
Drafted by the Orlando Pride with the 14th overall pick in the 2021 NWSL College Draft after scoring 27 goals and added 12 assists in her last two seasons ... Her selection on the 2020-21 first team marked the third time she earned All-America honors.

Jaelin Howell, Florida State, Senior.
Became the second Florida State player to claim the Hermann Trophy after Mami Yamaguchi in 2007 when she beat out UNC's Brianna Pinto (who turned pro with Gotham FC) and former Florida State teammate Malia Berkely (now at Bordeaux in France) ... Was capped twice for the USA in the last year.

Forwards
*Amirah Ali, Rutgers, Senior.
Picked 22nd overall by the Portland Thorns in the 2021 NWSL College Draft but chose to return for a fifth season at Rutgers... Became the Scarlet Knights' first three-time All-American after earning first-team honors in 2019 and 2020-21 ... Ranks fifth all-time at Rutgers in points (77) and goals (32).

Mia Fishel, UCLA, Junior.
Revealed on Wednesday that the 2021 fall season will be her third and final season before she pursues a pro career ... Scored 20 goals in first two seasons for the Bruins ... Earned her first senior national team call-up for the Oct. 2020 camp after winning the Golden Ball at the 2020 Concacaf U-20 Championships with 13 goals (a new all-ages record for the women's program in a qualifying tournament).

To my Bruin family pic.twitter.com/sI5yByoJiK


Haley Hopkins, Virginia, Junior.
Graduated with a degree in medicine, health and society from Vanderbilt but has two years of eligibility remaining after transferring to Virginia, where Steve Swanson has assembled arguably the best attack in the country ... Helped Vandy win the 2020 SEC title and earned All-America honors for the second time ... Ranks second all-time among Commodore scorers with 34 goals.

Ana Podojil, Arkansas, Junior.
Became the Razorbacks' first SEC Forward of the Year in 2021 and their first first-team All-American for the 2020-21 season ... Also named a third-team All-American when she scored 14 goals as a freshman.