Hank Steinbrecher: A great American soccer man checks in from the surf 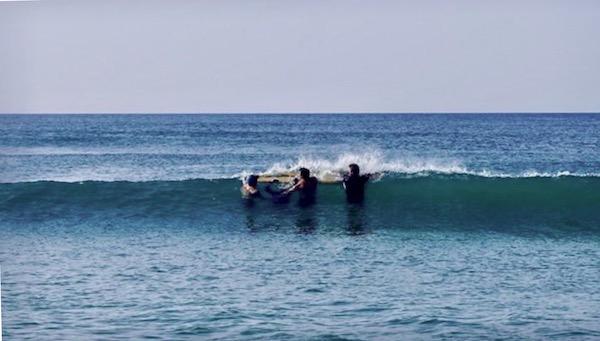 Our friend Hank Steinbrecher is unequivocally one of the greatest contributors* to the growth of American soccer. When we saw this piece by Steinbrecher, published on his Facebook page and in The East Hampton Star, we wanted to make sure that the Soccer America family had a chance to read it.

The day began well enough. Up before dawn with childlike anticipation, clear skies and a bit of the night chill still in the air. Out for a big breakfast. Sun up, getting warm, we headed east on Montauk Highway to Montauk Point.

I had been there often as a young lad, some 50 years ago. The area then was nearly barren of buildings. A few beautiful homes and the old Montauk Tower. Now it’s a mega resort, a playground for the rich.

Young and passionate about surfing, my friends and I would make the long trek east to find the best waves on Long Island. Ditch Plain was my favorite spot. We would drive out and camp for a few days of surfing.

On this day I was heading there after being landlocked for the past 36 years. Chicago and Tucson do not produce great surf. I yearned for the rhythms of the ocean. I have always found it cathartic. Dreamed about it, actually. We turned into the beach parking lot and there she was. The Atlantic Ocean.

My son has served in the military for the past 20 years. He and I have not spent more than a few days at a time together, because of his deployments and my international travel. On his last deployment he sent me a message.

“Dad, I have sent you a ticket in the email. We are going on a trip together.”

Where are we going?

“It is a surprise. Once you get here [Washington, D.C.], we will have a seven-hour drive. We will spend the week together.”

He knows how to keep a secret. I felt like a kid a week before Christmas. I got out my compass and looked on a map at the 500 miles around D.C. Ah, he’s taking me to the beaches of South Carolina. We spent many a vacation there.

Wrong. We headed north from his house. Where were we going? “It’s a surprise.” Over the George Washington Bridge. Going to New England?

Wrong. Over the Throgs Neck Bridge. This was my old stomping grounds. Past Levittown, my hometown. What were we doing? My son was taking me home. We would spend the week reliving my past.

Wrong. The boy can really keep a secret. We arrive in East Hampton. He’d booked a B&B; here for the week. We would relax and get to know each other again.

Wrong again. The next morning, we went to Grain Surfboards. These guys are the best. My son had arranged for us to build a classic wooden surfboard from scratch. Grain sources sustainable wood to build their skateboards and surfboards. Wood, not foam boards. Classic.

It was our project. We spent every moment of the week together. The depth of our conversations and frankness of our talks were marvelous to experience. Yet the most salient moments came when there was no conversation. In the quiet. Feeling the bond between father and son. It was a real reconnection. That alone was worth its weight in gold. 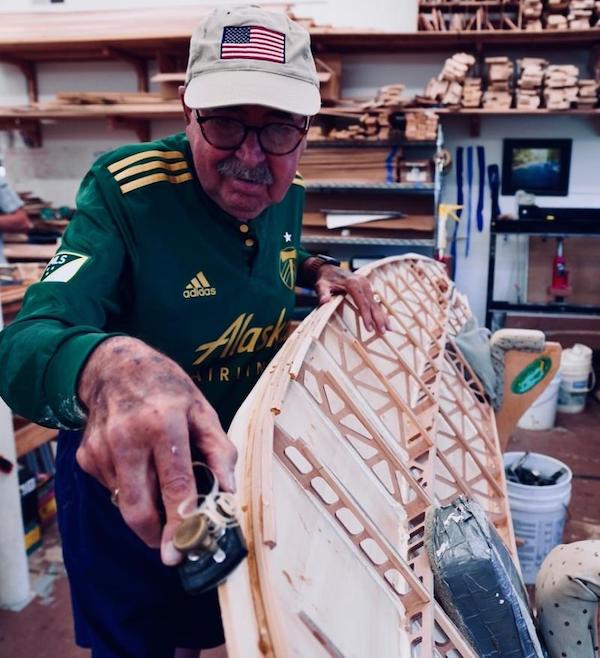 My college teammate and dear friend, Antonio Rutigliano, lives in East Hampton. We were able to hook up with him and shared many stories and meals.

Back to Ditch Plain, where the story began. I am a 74-year-old man diagnosed with end-stage heart and kidney disease. Complicated by Parkinson’s. Told that I need a heart and kidney transplant. However, I did not qualify. They said that there was not much more they could do. Go live life.

I have been unstable and weak in the legs. Yet here we were making a new board. My son truly knows me. I may never use it but my family will, hopefully my grandchildren.

We ambled out to the beach. I sat down in a chair we’d brought. Immediately I felt a sense of serenity. I’d brought my camera and took shots of the surfers. The lads from Grain Surfboards, Brian, Theo, and Luke, were with us, along with a friend of theirs, Jay. Jay is a hulk of a man with great humanity. Brian, Theo, and Luke are unique businessmen. They showed us genuine care, compassion, hard work, artistry, and intelligence. They were fun guys to be around.

I have come to know the ocean and love it. There is really something mythical and magical about the surf. You are at the junction of land, water, air, and wind. They envelope you. Yet you can master them. The rhythm of surf is hypnotic. I have learned that the ocean has many moods. On some days it can be very angry, other days peaceful. Now it was happy. The surf was a two-to-three-foot swell. A slight offshore breeze, sunny and warm. Many surfers in the water.

Sitting there I yearned to be in it. My son asked, “Want go surfing?” Given my condition, I would have to be out of my mind to say yes. I can barely walk without assistance.

So, my son, Jay, and Brian got a board and helped me into the surf. Theo documented the journey in photos. We walked in, surf coming at us. I felt an immediate sense of excitement and simultaneously a sense of peace. The waves were coming in and we were going out. I was determined to get past the break. The first sizable wave came at us. I duck-dived under it, reliving childhood memories. The feel of the ocean breaking over my head and through my hair was energizing. I felt great satisfaction and happiness.

“How many more days do I have left?” I thought. Thank God and thank my son for giving me at least one last chance to feel this harmony with nature.

We made it out past the break. We stayed there for a bit and then made the journey back to shore. Weakened, I needed lots of help to get back in. I climbed onto the board, lying flat and too far back to catch anything. The nose of the board was high in the water. No way to catch a wave.

The lads got my legs back under me and walked me out of the surf. I must have looked like a beached whale. My son and I embraced, teary-eyed in each other’s arms.

We made the trek back to the surf shop. I was exhausted and energized all at the same time. You could say I was “stoked.” Indeed, my son had brought me back home.

* During Hank Steinbrecher's tenure as U.S. Soccer Secretary General (1990-2000), the USA hosted the 1994 World Cup and hosted and won the 1999 Women's World Cup. It also won the first Women's World Cup (China 1991) and Olympic women's soccer competition (Atlanta 1996). Steinbrecher was inducted into the National Soccer Hall of Fame as a builder in 2005 and the Werner Fricker Builder Award in 2012.

(“Hank has been one of the most important people in developing and guiding the sport in this country. Under his leadership, U.S. Soccer accomplished numerous achievements and earned respect across the world for the Federation’s success on and off the field.” -- Sunil Gulati.)

A New York native, Steinbrecher grew up playing soccer and won an NAIA national championship at Davis & Elkins College in 1970. Steinbrecher served as head coach at Warren Wilson College, Appalachian State and Boston University. While at BU, he served as the venue director of the 1984 Olympic men's soccer competition in Cambridge, Mass. He was later director of sports marketing at Quaker Oats -- when such positions weren't held by soccer enthusiasts -- before joining U.S. Soccer.