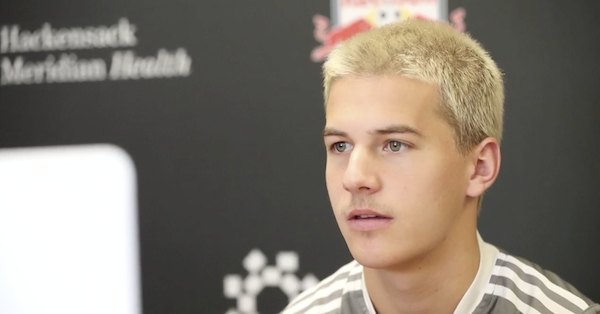 Ahead of Saturday’s Hudson River Derby vs. NYCFC, the Red Bulls, fighting for their playoff life, were delivered a huge boost of momentum on Wednesday thanks to a 1-0 win over the reigning champs, the Columbus Crew.

That critical win was made possible thanks to a tremendous effort from the Man of the Match, John Tolkin, who scored the game’s only goal and was solid on both sides of the ball. For anyone who has paid attention to the Red Bulls this season or who has been following the wave of young players the league is producing, this was not a surprise.

Tolkin, 19, has quietly emerged as one of the best teenagers in MLS while at both left back and in the midfield. His solid passing, smart defense, and intelligent reading of the game has made him an impact player on the Red Bulls this season, regardless of where he plays.

“You can see around the league all these young guys are getting opportunities and they're making the most of it and as far as my group goes, there's a lot of guys that are playing well and a lot of them are starting to get looks from Europe and stuff like that,” Tolkin told Soccer America. “Red Bull especially, I think they do the best as far as giving guys opportunities -- and those guys in the academy now that will come through the ranks and guys will just keep coming up. But I think as far as the league goes, it's like a breeding ground for young guys.”

What has turned Tolkin into an emerging fan favorite is his long-standing attachment to the club. He signed a homegrown deal in early 2020 after joining the club’s academy in 2015 at the age of 13. Before that, however, he regularly attended Red Bulls games and even served as the club’s ball boy. 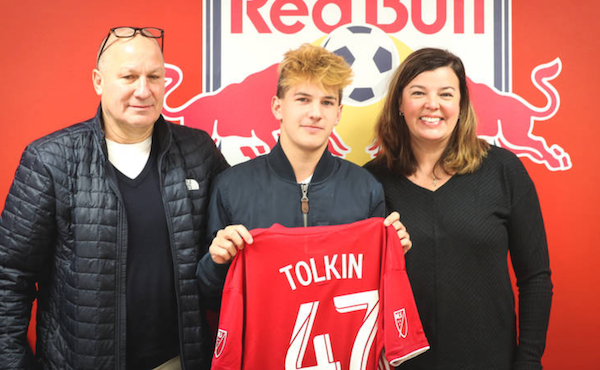 Parents Chris and Sara with John Tolkin upon his signing a pro contract with the Red Bulls at age 17 -- the club's 22nd homegrown signing -- in January of 2020.

For Tolkin, the way the Red Bulls operated their academy changed his perspective.

“I actually initially said no to Red Bull because I was in my comfort zone and I didn't want to meet new people and play for new team,” Tolkin recalled. “I was like: 'whatever, it's just Red Bull.' So I ended up coming here, and when I first joined the academy, I wasn't really thinking about becoming a pro, but obviously you're training right next to them. So, the environment they put you in is perfect. When it came time to decide what I wanted to do [in signing a homegrown contract], it was no question for me. For the first time, there wasn't really any question between deciding to go play in college or trying to go straight to Europe or something. I knew everything that I needed. I had right here.”

Like others his age within the league, Tolkin also dreams of heading to Europe to play in the big leagues there. He also wants to return to the international stage again after playing for the U.S. U-17 team in 2019 but missing out on the U-20 cycle due to cancellation of the World Cup because of COVID. He insists however that he is solely focused on the Red Bulls at the moment to avoid distraction.

“But as far as it goes for me, the opportunities will come if you just put your head down and work,” Tolkin said. “That's really what my mentality is about it. If you think about that stuff too much, it will distract you from where you are at the moment. And that's what I'm trying not to do.”

The current season has been a breakthrough period in Tolkin’s career. Initially he was slated to be a backup for Andrew Gutman at left back but when Gutman suffered an injury, Tolkin shined as his replacement. When Gutman was healthy, Tolkin was too valuable to replace.

Eventually, however, Red Bull coach Gerhard Struber placed Tolkin into the midfield to allow room for him and Gutman to play together. This was the case on Wednesday night in the win over Columbus, which kept it within five points of a playoff spot. The Austrian manager admitted to being surprised how well Tolkin adjusted.

“I think the big advantage for him is that he has a very, very good technical ability to handle the moments in tight spaces, with pressure, with our team in a very good way,” Red Bull coach Struber said of Tolkin on Wednesday. “I think this helps us him to play in more positions. Also, I think his reorientation to realize the spaces around him, he can handle this in a very interesting way. And I think this is also for me a little bit a surprise that he handled also this position very well.”

For Tolkin, this season has been a learning experience and he he is playing with confidence these days.

“What I've learned the most is taking it day by day and then just as far as on the field, being confident,” Tolkin said. “I think when you're confident you don't think about doing things wrong, you don't overthink the things you do well, and it keeps me levelheaded. That's kind of what I've stuck to since I was young. And that's kind of what I'm still doing right now. And I think it's working for me.”

As he looks to the games ahead, Tolkin is also reflective. Wednesday’s win came at an emotional moment as Bradley Wright-Phillips made his return to Red Bull Arena where he once was a club legend. For Tolkin, he was in the academy when “BWP” and other stars were on the first team -- and he became inspired to be a professional.

Now he is where he dreamed he wanted to be – but he is not content. He wants to continue to progress personally and for the team in the thick of a playoff race.

“I actually used to ball boy for some of the guys on the team right now,” Tolkin said. “We joke about that in the locker room. I just remember always having a great time at games. And they always used to win when I would go. I would always love to go. So yeah, overall it was just a great experience. And I was always thinking like, dang, I'd be really cool to be out there one day.”