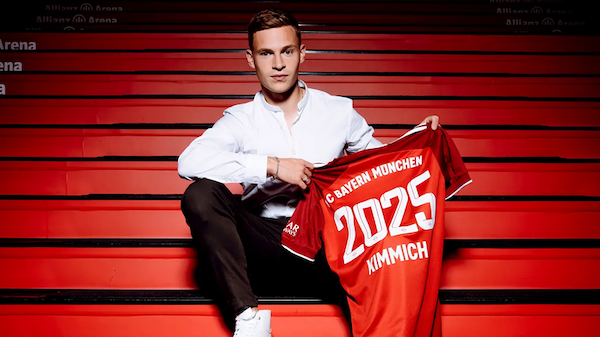 Bayern Munich and Germany's central midfielder Joshua Kimmich  extended his contract with the club this week until June 2025. There's nothing too remarkable about that news. Bayern Munich is the kind of successful club where starting players are happy to spend their peak years racking up trophies. The interesting thing about Kimmich, however, is that he negotiated the contract extension without the help of an agent, or any kind of intermediary at all.

Kimmich, 26, explained that the last time he'd signed a contract with Bayern -- through an agent -- he came away with a "less than perfect feeling" about the deal. A lot of details about his new contract had been leaked to the outside world, and he said that many other players had experienced the same thing. He hinted that promises were made that hadn't been kept. This time, he wanted to be in control, and to be sitting there in person during contract talks. "This time it was important to me that I sign with a good feeling," he said, "and that was 100 percent the case."

Kimmich didn't mention what the rest of us are already thinking about -- namely, that he also saved paying the agent a fat commission. The transaction raises again the pertinent question of what agents are actually good for, other than leaching eye-watering quantities of cash out of the game that could be much better invested elsewhere.

An agent might argue in return that they would have negotiated a much better deal for Kimmich, and that even taking into account the commission, the player would be better off. For clients younger and less experienced than Kimmich, the agent might continue, the role of negotiator is absolutely crucial to prevent naive players being exploited by unscrupulous team owners.

Nonetheless, as Kimmich is 100 percent happy with his deal, it has to be concluded that deals without agents are indeed a possibility. People sell properties to each other without a real estate agent, and can save themselves a lot of money without the middleman. A cynic might even claim that the only role of an agent is to barge into a deal, push prices up, and enrich themselves in the process.

A property agent who had sold my family a house when my kids were very small rang me up a few years later to inquire if I was interested in buying a bigger place now that my children were growing up. No thanks, I said, the property you sold us was just fine. Nice try, though. In similar vein, agents will prod their players into thinking about a move, dangling the prospect of a bigger club and higher wages. There's nothing intrinsically wrong with elevated ambitions, of course. Until the move doesn't work out because it was fuelled by the agent's greed, not the player's best interests.

FIFA announced last year that it is legislating to make agents' roles much more transparent and more closely regulated in 2022, with plans to cap the amount they can earn to six percent on a transfer, and to three percent of a player's salary. Agents, needless to say, are not so keen. In 2019, according to the AP,  they creamed a total of $653 million off the top of the game, in a transfer market worth $8 billion. In the dollar-crossed eyes of an intermediary, the mother of all transfers remains Paul Pogba's $125 million move from Juventus to Manchester United in 2016, from which agent Mino Raiola trousered a cool $32 million, before taking further fees off the buying club and the player. All that cash for doing... what, exactly?

It goes without saying that such vast sums of cash would better serve many other areas of the game, where the list of needs never changes: new and improved fields and facilities in developing countries; better support for women's soccer; youth development; the education of coaches, and so on. As always when superfluous, parasitic fat-cats increase their wealth, it's the bottom end that suffers. There is no need for Mino Raiola to suck that much money out of the game, it benefits no one in soccer at all.

I'd love for other players to follow Kimmich's example as we usher in an era of less avaricious post-pandemic salary goals. FIFA could go a step further on its (welcome) regulation measures next year and ban agents altogether, while working with the players' union FIFPro to employ advisors and negotiators on fixed salaries. These officials could sit in on all transfer and contract talks, while serving as a job creation scheme for former agents. Who would pay for all that? The players themselves, via union fees, using some of the cash they're no longer forced to pay their 'indispensable' agents.

Since the start of the Covid-19 pandemic, there's been a lot of talk in Europe about how to rationalize clubs’ debt-ridden, insolvency-causing financial mismanagement. The first, the quickest and the least painful measure would be simple -- cut the agent out of the deal.