Who's the best? MLS all-stars' triumph is something we can feel good about, whether or not it matters 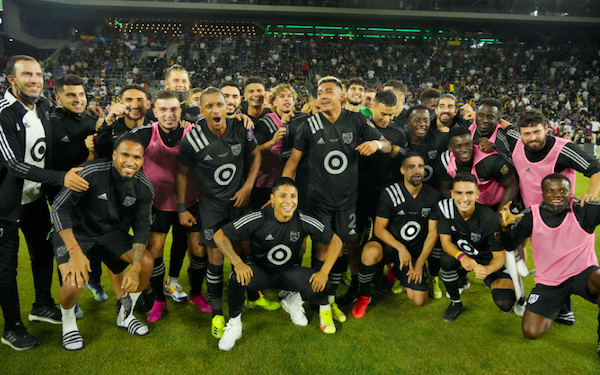 Well, that's that. The triumph of Major League Soccer's All-Stars in Wednesday evening's tête-à-tête with Liga MX's best made it clear -- “proved” it, in the words of some -- that the United States' premier soccer league is just about on par with Mexico's more revered top-flight competition.

All it took was a superior showing in a penalty-kicks tiebreaker, following a rather entertaining 1-1 draw at Los Angeles FC's Banc of California Stadium, to pull MLS more or less level, presumably closing the gap provided in Liga MX's thin victory, by hitting the crossbar first from midfield, in the previous evening's MLS All-Star Skill Challenge, a test that featured -- finally! -- a soccer version of arcade favorite Skee-Ball.

Oh, wait, that top-10-all-time moment actually occurred in the “MLS All-Star Skill Challenge presented by AT&T 5G.” That matters, because all of this, of course, is about marketing and commerce -- the partnership benefits both leagues -- and by that matrix, MLS's 25th all-star event was a stunning success.

The three-day summit was a blast, for fans and, more important, the participants. The skills thingy was entertaining in the way “Battle of the Network Stars” (Google “Gabe Kaplan,” young 'uns) was first-rate television a few generations ago. And Wednesday night's proceedings played as advertised -- except, of course, neither Javier “Chicharito” Hernandez nor Carlos Vela, the Mexican stars of Los Angeles' El Trafico derby and the faces bill-boarded beforehand to whip up excitement, were on the field, a little soccer reality getting in the way of the fantasy.

The game was swell, really. Both sides, stirred by the natural rivalry between the U.S. and Mexico -- one that, of course, plays out on so many cultural levels beyond sport -- really cared about the result and competed as such.

There'd have been more scoring, perhaps, but for some fine defense: Sanchez's volley off the line to keep LAFC's Diego Rossi from chipping home in the eighth minute; Philadelphia Union goalkeeper Andre Blake's one-on-one swipe off the foot of Santiago Gimenez just before halftime; and Gimenez's Cruz Azul teammate Pablo Aguilar's slide to block Sporting Kansas City's Daniel Salloi at the left post (creating the CK on which MLS scored).

And it climaxed, of course -- a key component, it seems, of nearly every important competition these days -- in penalties, with the New England Revolution's Matt Turner offering a reminder of his Gold Cup heroics a few weeks ago by stopping two kicks and providing FC Dallas' Ricardo Pepi (fresh off learning he's in Gregg Berhalter's World Cup qualifying plans) the opportunity to start the MLS celebration.

A full house, not far from a relatively even split in allegiance, enjoyed the festivities, and those taking part found it rather special. Especially the home side, which demonstrated, one after another noted, that MLS was gaining on its rival league to the south.

“Winning a match with the best players of Mexico feels so good,” Seattle Sounders forward Raul Ruidiaz said in Spanish during the postgame Zoom interviews. “This is proof our league is growing more and more. It was a great victory, and we're happy for that.”

Pepi agreed: “I feel like you guys can see that, that MLS is growing, getting better and better and more competitive, and we're slowly getting there.”

“Coming out with a win can definitely mean something, can prove something to speculators and whatnot,” Atlanta FC defender Miles Robinson said. “We've got some great players in this league and proved it tonight.”

“If there's anything I learned from this game,” Blake said, “MLS is right up there with Liga MX.”

Clearly, MLS has closed the gap over the past decade and especially in the last five years, which is admirable but besides the point. Major League Soccer's worthiness has nothing to do with Liga MX nor its quality, and the conversation tethering North America's premier top-tier leagues -- its only true top-tier leagues -- does neither any favors in this aspect.

Liga MX has dominated the real competitions between the leagues, especially in Concacaf's Champions League, the biggest of the battlegrounds. Mexican clubs have won all 12 tournaments since the club championship received a massive upgrade in 2008. Nine of those were all-Mexico battles. MLS is 25-58-25 (win-loss-tie) in head-to-head CCL clashes and 7-28 in aggregate series. Add the Champions' Cup, its precursor, and the American/Canadian clubs are 31-72-31 and 8-37.

MLS is 1-5-3 in Leagues Cup showdowns -- Cruz Azul beat Tigres in the first title game -- and this year's final four has Seattle and three Liga MX clubs: Leon, UNAM and Santos Laguna. (MLS was superior, sort of, in the 2007-10 Superliga, going 18-10-12 head-to-head but dropping all three title-game meetings, two of them on PKs.)

There is plenty of context around these results -- timing of the Champions League perhaps foremost -- but if MLS wants to be considered Liga MX's equal, then it needs to win a trophy. Or six. It'll happen one day, right? That one day hasn't arrived yet.

Nonetheless, part of the dialogue surrounding this year's All-Star Game was about “who's the best.” As if a 90-minute exhibition, between teams that practiced together just once and involving an appropriately liberal use of the benches -- each team making 16 substitutions and nobody lasting more than a half -- could have any bearing in this discussion.

The leagues exist in very different landscapes. MLS clubs must abide by a salary cap and numerous rules dictating how players are acquired and the size of and budget for rosters. Liga MX is like most of the world: If you have the cash, you can upgrade your stash.

Mexico's is a wealthier league, one of the three best in the Americas (with Argentina's Liga Professional and Brazil's Campeonato Brasileiro Serie A), with a much greater depth of talent and far more highly paid players than MLS possesses. That's no slight on MLS; the level of play has grown immensely and it has become a pretty good steppingstone for young players looking to play in Europe. Its pluses are many -- it's the most competitive first-tier league on the planet, in that any team can beat any other team, home or away, on any day, and provides greater diversity of playing style than nearly everywhere else. The fan culture has exploded over the past decade, and it seems every mid-sized city across the nation wants a team.

MLS is thriving in so many ways, but in soccer, in this part of the world, it's Mexico that's mattered forever, that provides the measuring stick that counts. Whatever the United States has must be compared to Mexico, and so here we are. There's an inferiority complex at work, along with, generally, some level of inferiority. It's why “dos-a-cero” meant so much, why the 2002 round of 16 reverberates so strongly, why what occurred this summer -- the Nations League and Gold Cup triumphs -- felt so good and, for Mexicans, stung so badly.

Every time an American team can beat Mexico at its national game in competitions that matter, it says that American soccer matters. Wednesday's all-star clash mattered to those taking part, on both sides, and so, the narrative goes, MLS's victory was another step forward for the game on these shores. It's something we can feel good about, whether or not it's true. Whether or not it matters.

mls
1 comment about "Who's the best? MLS all-stars' triumph is something we can feel good about, whether or not it matters".
Next story loading