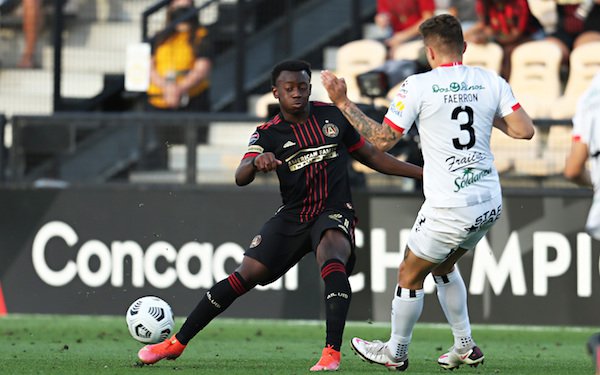 The big stories after Thursday’s USA roster announcement for the opening of World Cup qualifying included the team’s three teenage players. Ricardo Pepi drew much attention because he reached a decision to play for the United States internationally. Gio Reyna was also important because he has been terrific to start the Bundesliga season for Borussia Dortmund.

Then there’s 19-year-old George Bello, the Atlanta United left back who at one point one was of the most promising players during his U-17 cycle but struggled with injuries and later under Frank de Boer with Atlanta.

Bello signed his first professional contract, a homegrown deal, with Atlanta Untied in 2017 at the age of 15. He made his first-team debut the following year late in the season during the club’s famous title-winning campaign under Tata Martino.

Part of beginning a professional career at such a young age is that you can struggle, rebound, and hit your stride again early on. That is indeed the case with Bello, who has had a great season in 2021.

It hasn’t been easy to succeed for Atlanta United this season either. The club struggled under new coach Gabriel Heinze -- who was quickly fired midseason. Following the Gold Cup, the club began hitting its stride and the team has been surging – with Bello playing a big role along with new designated player Luiz Araujo, U.S. national team defender Miles Robinson, and the continuous improvement of Josef Martinez in his comeback from ACL injury.

Bello, for his part, has continuously impressed no matter the situation. In addition to the Atlanta rollercoaster, Bello also earned a call-up to the U.S national team for the 2021 Gold Cup. While he often played behind Sam Vines in that tournament, Bello got the start in the final against Mexico, coached by his former Atlanta coach, Martino, and played into the second half of a 1-0 win.

Since coming back from the Gold Cup in Atlanta, Bello has continued to play with a high level of confidence while also showing impressive skill -- as was evident in his back-heel assist in a 3-2 win over Columbus on Aug. 7. That win sparked a four-game winning streak Atlanta has coming into this weekend when it will host Nashville SC. The recent streak has put Atlanta back in the playoff picture.

“He was good again," Atlanta United’s interim coach Rob Valentino said this month after the win over Columbus. "I think he’s brought an energy and savvy from a tactical side back from the Gold Cup. That comes from being around good coaches, good players.”

Given the level he is playing, it was easy to see why U.S. coach Gregg Berhalter selected Bello for World Cup qualifying. With six central defenders on the roster, Berhalter seems likely to use a 3-4-3 formation, which would push the fullbacks forward into the midfield and provide attacking quality out wide.

“It was a tough decision between Sam [Vines] and George,” Berhalter explained. “In one respect, we felt Sam's situation with his club [transfer from Colorado Rapids to Royal Antwerp] and missing time in preseason may perhaps set him back.

“But we also liked George's performance at the Gold Cup. We like his mentality. We like his tenacity. He's a really young player and it will be interesting to see how he can respond to these games, what it means to play away in Concacaf, and for him see what this is all about.”

“We believe George is a massive part of the future,” Berhalter added. “It's a great opportunity to get him involved now.”

Born in Abuja, Nigeria, Bello and moved to the United States when he was just 1 year old. His father, an amateur player, instilled in George the love for soccer when he was very young. He looked up to players like Neymar and Lionel Messi but also developed a love for the left back position and would frequently watch videos on David Alaba and Marcelo to learn the position.

When he joined Atlanta, however, the club recognized his enormous talent but also the work that needed to be done to help him get there.

“For George, he's one of those players who has the 'X factor,’" said former Atlanta United academy director Tony Annan in 2018. "For me, he's a special player who has all pieces. We have to polish them up and educate him to make him a smarter player. But he's one of the most exciting prospects in the USA, in my opinion.”

That hard work in his development has paid off and that once raw prospect is now someone who is an everyday starter for Atlanta as well as a Gold Cup champion who is now ready to help the United States qualify for the 2022 World Cup.

The young American talent of this era faces the dilemma early on whether to go abroad or go pro with MLS. A few years ago, when it came time to sign his first professional contract, Bello figured Atlanta United was the best fit.

“Personally, and mostly because it's my hometown,” Bello said of signing with Atlanta United in 2017. “But also, because MLS is a great place to start for young players because it's a great place to get your feet on the ground, get used to playing, get known, until when the time comes when maybe a European team wants you.”

When looking at where he is now for both club and country, it is clear that the decision to start in Atlanta was correct. He’s been able to play with quality players and often in front of massive crowds often above 60,000 people. Now he is part of helping the team get back on the winning path.

Perhaps most importantly, he is still on a path that will help him get to his ceiling. Earlier in the season, he put it best as to why he is still a player full of promise and potential.

When looking at what he’s done this year, that’s an impressive statement.