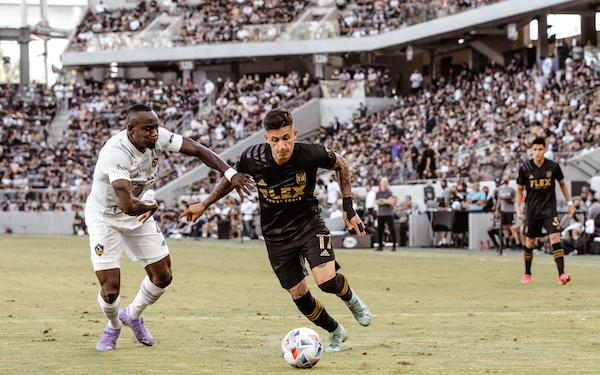 It was a moment of true magic, the kind that can wield real power, that can fuel a leap toward another reality. The sort of explosion that might whip Los Angeles FC back onto the path promised two seemingly endless years ago, when it played as dazzling a brand of soccer as MLS has witnessed.

Brian Rodriguez's zig-zag through the LA Galaxy backline and rocket into the ceiling of Jonathan Bond's net, early in the second half of Saturday afternoon's glorious renewal of Major League Soccer's most vibrant telenovela, had the shine of something truly special, and when he struck again eight minutes later -- following a brief moment of cutting melodrama -- well, there you go.

LAFC had faltered of late, with no victories since mid-July, no points for a month, and a lengthening run, some 27 MLS games, since it had last hit the net at least three times. It had played some very fine soccer in a club-record seven-game winless stretch but finished so few of its chances and erred at the back, tumbling to its worst 20-game record, with half the points it had amassed in as many games en route to the 2019 Supporters' Shield.

“I can show everybody,” LAFC coach Bob Bradley said on the eve of the 12th El Trafico showdown, “the things every game that look exactly the same as they did” when LAFC set the standard. All that's been missing are the goals that those “things” deserved. “It's so close in so many ways,” he said. “Right now we need the right play at the right time.”

Rodriguez appeared to make that play, providing a one-goal advantage, and, sure, the Galaxy answered just six minutes later -- typical Trafico, with Dejan Joveljic echoing Rodriguez's fan-embracing celebration after his superb second strike of the afternoon -- but Rodriguez, after two more minutes, put away the rebound of one in a series of marvelous Bond saves, and LAFC was roaring.

El Trafico has this knack for magnifying everything to delirious heights -- a gift bestowed by Zlatan Ibrahimovic's magnificent volley at its birth -- as the high drama of domestic soccer's best derby repeatedly exceeds all reason and provides an illusory sense of clarity. And so it went: The Galaxy, of course, rallied for a late goal, another really fine finish, and all the bluster that one magic moment had conjured was gone.

The 3-3 draw at Banc of California Stadium was a treat to see, a strong contender (among several) for the second-best face-offs in the series -- since nothing surely will ever displace what Bradley, once this one was over, called “the Zlatan Special” -- but it was more a gut-punch for the home side.

“I really feel for the guys tonight. That's a tough game to lo-- ... to tie,” LAFC's head coach said, catching himself just in time. “It feels like a loss.”

There were plenty of positives, he noted. LAFC had played with energy and flair. Found greater precision and created ample opportunities in an electric second half. Overcame an early deficit and twice surged ahead. Got strong performances around the park, particularly from the much-maligned Rodriguez, whose production has never matched his often incisive play in partnership with Carlos Vela and Diego Rossi.

The shot difference was 20-10. Add that to totals from the previous seven games, five of them losses, and LAFC (6-9-6) has all but doubled up on its foes, 143-72. While being outscored, 18-11. The club is at its lowest point, no matter that it often looks terrific. But that does matter.

“If you take our history, take what we started.” Bradley said in his Zoom media session Friday, “the way we wanted to play, the kind of football we wanted to play, our identity, our ability to go forward, score goals, win balls back, you could see a lot of that right from the start in 2018. It evolved into something that was pretty special in 2019. I think as we started 2020, the night at home against Leon [in a 3-0 Concacaf Champions League win] and the first two [league games], could see so much of it continuing to grow.” 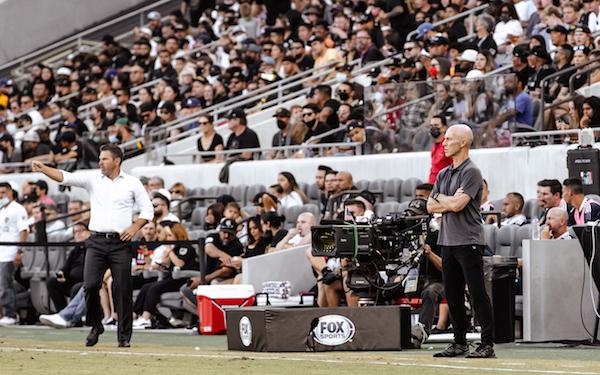 Then the Covid-19 pandemic hit and everything shut down. LAFC went to Orlando for MLS is Back without Vela, who remained home with his pregnant wife. When league play returned in earnest the third week of August, he lasted all of 57 minutes -- in a 2-0 loss to the Galaxy -- before exiting with a knee injury. He didn't start again until the regular-season finale two and half months later.

A quadriceps injury sidelined the Mexican star, MLS's MVP after scoring a league-record 34 goals and assisting 15 more in 2019, most of the first month this season, and he's labored to find his best form through much of the summer. He'd looked good the past few games but aggravated the quad in the Aug. 21 loss on the fake grass at Vancouver.

It's taken a toll.

“Literally, in the last 12 months. our ability to find consistency -- consistency in lineups, consistency in having our best players on the field playing at their best level -- those are things we've had to deal with ...,” Bradley said. “This year has been a strange year [with] some of the guys not being as sharp, not being as consistent, [but] by and large, if anybody watched us play in the past, you'd see the same LAFC football.

“You'd still see a lot of chances created. You would still see a team that for the most part is hard to play against, wins balls in good spots. Our defensive effort this year is actually quite good, but we've lost something. We've lost our ability and our confidence level when we create chances. We've not [scored more than twice in a game]. For us, that's just not good enough, and so we're being tested.”

LAFC, which sits ninth in the Western Conference, two points behind seventh-place San Jose, has failed to hold onto leads eight times this year, and Kevin Cabral's 86th-minute strike, from Julian Araujo's byline feed and engineered by Efrain Alvarez, makes seven games -- five of them losses -- in which points have been dropped in the 79th minute or later. One of them was the Galaxy's 2-1 win in Carson, 12 miles south down the Harbor Freeway, on Jonathan Dos Santos' late goal.

That “quite good” defensive effort has been wanting too often, and Saturday's draw was a disappointment. You could see it in the stands 10 minutes after final whistle. The southeast corner of Figueroa stand, upper deck, the white-clad Galaxy supporters were still celebrating. At the north end, LAFC's 3252 fan group, what was left of it, sat in seeming disbelief.

It was certainly a Trafico classic, another one, with much to unpack. Dejan Joveljic fired the Galaxy ahead in the 20th minute, against the run of play and from a miscue by reliable center back Jesus Murillo, scorer of the MLS All-Stars' goal on the same net in the penalty-kick triumph over Liga MX's best three days earlier. It was his first MLS strike, and Colombian striker Cristian “Chicho” Arango, like Joveljic making his fourth league appearance after arriving in early August, pulled LAFC even from the spot just before halftime after drawing a foul from Niko Hamalainen just before halftime. 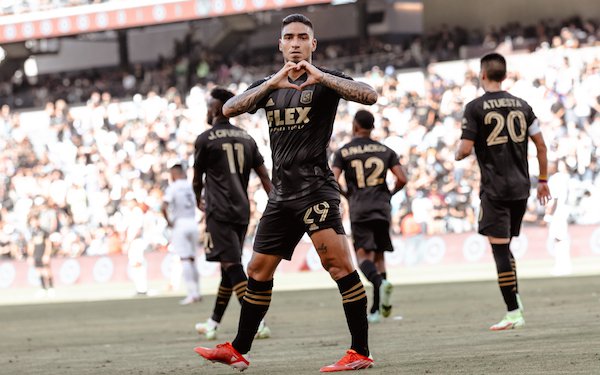 The thrust and volley of the second half was splendid, and that Rodriguez goal is what will be remembered. And not fondly by all.

Galaxy coach Greg Vanney, whose team was coming off one-goal home losses to Colorado and San Jose, hasn't been happy with his reconstructed backline. Rossi got the better of the otherwise excellent Araujo a few times -- perhaps deserved a penalty on the game's first thrust -- and there are things that need to be fixed.

“I think too often we create our own demise in many ways, when our backline sometimes is getting pessimistic and moving backward when our midfield and front group is trying to step and put pressure on the ball, ” Vanney said. “Huge spaces happen between our backline and midfield line. I feel like our backline needs to be a little bit braver at times about recognizing and helping out midfield to get pressure to the ball and to squeeze space and condense spade.

“We're just not active sometimes in rotating from side to side and pushing our fullbacks out to get tighter to wingers and our strong-side center back coming across to defend that space. We keep creating this little in-between moments when we're not sure who should be doing what, and that's absolute gold for an attacking team, especially a team like LAFC. They want you to have this lack of clarity and for you to be kind of in between things, and that's where they thrive.”

Rodriguez certainly thrived, collecting a ricocheting ball just beyond the corner of the box on LAFC's left flank, sashaying past Sebastian Lletget, then Sega Coulibaly, then Araujo and firing over a sliding Derrick Williams and Bond and into the net. It was gorgeous. It was something, Vanney said, “which just can't happen.”

“A guy can't carve through us like we're cones in our box and put the ball up top [into the goal],” he said. “That just can't -- it can't happen. It's simple. Our guys, all of us, will be watching that video for the next 20 years on highlight reels, and that's not a position that any of us would want to be in. I was in one of those [as a Galaxy rookie] when Preki cut us up in 1996 a few times, and it's not something you want to keep watching over and over for the rest of your career.”

It was magical, for a few moments.

“I see positives,” Bradley said, “but you can't call it a step forward where at the end of a game like that, you don't win.”