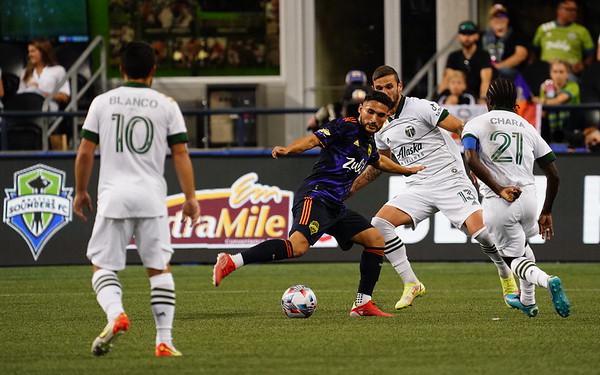 The Portland Timbers breathed new life into their season with a 2-0 win at archrival Seattle on Sunday night.

The Timbers had lost both 2021 Cascadia Cup meetings to the Sounders, 2-1 and 6-2, both at home, and they came into Lumen Field with just one win in their last seven games.

They have been plagued by horrific defending, entering the game with the second worst defense in MLS, but they harassed the Sounders, starting five players back from Wednesday's MLS All-Star Game in Los Angeles, and capitalized on Sounder errors for a pair of goals in the second half.

Felipe Mora set up Sebastian Blanco, starting just his second game since injuring his knee on the Seattle turf almost a year ago, and Mora put the game away in stoppage time with a goal of his own, his team-high eighth of the season.

“I’m extremely proud,” Portland coach Giovanni Savarese said, "because it’s not easy bouncing back from some of the difficult performances that we had, but the team worked very well this week."

The Sounders, who lead the Western Conference, were unlucky not to score -- they hit the woodwork four times -- but were undone because of a very poor first half. After the game, Coach Brian Schmetzer said the Sounders were too impatient, particularly in midfield.

Portland has reached the playoffs in all three seasons under Savarese but are still only 8-10-3 with Sundsy's win. The victory did catapult the Timbers into sixth place in the Western Conference, where just three points separate six teams battling for the final two playoff spots.

The evening was not all good for the Timbers. Midfielder Eryk Williamson, who started for the USA when it beat Mexico, 1-0, to win the 2021 Gold Cup, left the field with what appeared to be a serious leg injury in the first half.

Blanco said he had mixed feelings about the evening.

“Almost a year from my worst moment in my career, to come back with a goal, with the victory makes me feel happy," the 2020 MLS is Back Tournament MVP said. "but also I feel very sad for Eryk.”