The USA opened play in World Cup 2022 qualifying with a 0-0 tie at El Salvador. The Americans failed to create sustained pressure and ended up with few concrete chances. La Selecta's game didn't match the electric atmosphere at San Salvador's Estadio Cuscatlan, hosting its first game in the final round of Concacaf qualifying in more than 12 years. 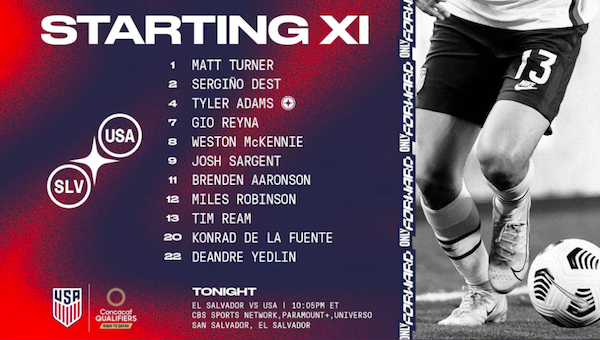 Matt Turner had to make one save, diving to his left on Eriq Zavaleta's header that wasn't hit with enough power to beat him in the 57th minute. Most of El Salvador's chances came on shots from outside the penalty area that missed the target. Turner's footwork got him into trouble in the 32nd minute when he conceded a corner kick after mishandling a backpass.

Miles Robinson and Tim Ream both played with composure and gave the Salvadorans few opportunities to operate at the top of the penalty area. Robinson missed on a wide-open header in the 9th minute, and his through ball started one of the USA's best chances that ended with Kellyn Acosta's header in the 75th minute. Sergino Dest looked lost on the left side, creating wide openings for El Salvador to exploit. Except for one shot saved by Salvadoran keeper Mario Gonzalez in the 19th minute, Dest contributed little to the attack. DeAndre Yedlin had to clear a lot of balls and helped provide a modicum of control on the right side of midfield until the U.S. game deteriorated.

Tyler Adams showed why U.S. coach Gregg Berhalter installed him as captain, cleaning up loose balls in midfield and covering for Dest to his left. That task limited Adams' ability to press and do more in attack, though. As usual, Weston McKennie could be found all over the field, getting in dangerous positions in El Salvador's half for his header that he put wide in the 72nd minute and for his cross that Acosta headed to the post and was pushed aside by Gonzalez and cleared by Ronald Rodriguez in the 75th minute. But he also shot wildly over the goal with an open Gio Reyna waiting for the ball in the 40th minute and repeatedly turned the ball over, like he did in the 67th minute. His frustration showed moments later, fouling and getting carded. Brenden Aaronson struggled to find the game in the first half in his role as the most advanced midfielder. He came out in the second half and was livelier, getting involved in the build-up on Acosta's chance.

Gio Reyna was involved in many of the USA's most dangerous moments -- Robinson's early header off a free kick and McKennie's header that he couldn't put on target -- but he found himself marooned too often on the wings and was given few opportunities to take advantage of his expertise on set pieces. El Salvador's backline was shaky but rarely fouled in dangerous positions and conceded just three corner kicks. Konrad de la Fuente, earning just his second cap, and Josh Sargent started out well but couldn't sustain their efforts. De la Fuente was more dangerous on the left side than the right side but simply didn't get enough help from Dest in breaking down the Salvadoran defense. Sargent did a good job of harassing the Salvadoran defense but once again failed to find the target, missing in the 5th minute when a rebound deflected off him.

The U.S. subs came in two waves: Antonee Robinson, Jordan Pefok and Kellyn Acosta in the 64th minute and Cristian Roldan and Sebastian Lletget in the 78th minute. Robinson provided some width that at least caused the Salvadoran defense to play attention down the USA's left side, and Pefok was involved in the build-up for Acosta's chance in the 75th minute.

TRIVIA: The USA has never lost a World Cup qualifier at the Estadio Cuscatlan. Its record is now one win and three ties in four meetings dating back to 1997.

NEXT UP: The USA plays Canada Sunday in Nashville. El Salvador is the only team to open with two home games, hosting Honduras on Sunday.