The anemic offense of the Gregg Berhalter-coached U.S. national team may have been overlooked amid the glory of his young players winning the Gold Cup -- with five 1-0 wins -- but two games into World Cup qualifying it has become tiresome and concerning. On Sunday, the USA settled for a 1-1 home tie against Canada after opening with a scoreless tie on the road against El Salvador. 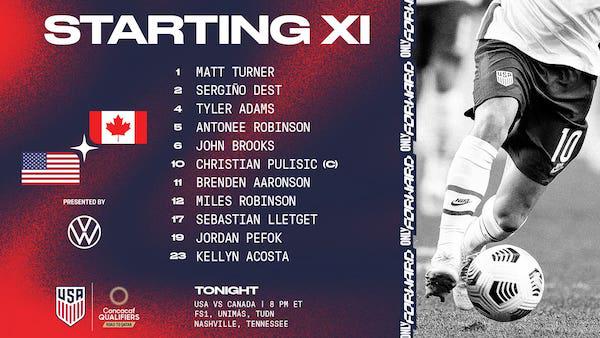 Matt Turner's only save was an easy one from Cyle Larin's weak shot in the 11th minute. He batted out a mis-hit close-range shot from Larin that was going wide for a corner kick in the 14th minute. Turner, who shanked a back pass out of bounds in the 33rd minute, had no chance on the second-half goal by Larin.

Before subbed with an injury shortly before halftime, Sergino Dest struggled defending against the formidable Alphonso Davies and threatened offensively once, when he beat two Canadians and fed Brenden Aaronson for a cross that was intercepted. Antonee Robinson, who was less challenged defensively, assisted on the U.S. goal. Central defender Miles Robinson won high balls and helped out Dest. John Brooks had a peculiarly eventful evening. His passes out of the back sourced the majority of the U.S. attacks. Some flew crisply to teammates, others did not, and none ultimately troubled the Canadians. Brooks oddly stopped marking Larin when the Canadian scored the equalizer, and got lucky Tajon Buchanan misfired after blazing through his mis-timed approach.

Besides Kellyn Acosta's pass to Antonee Robinson and Tyler Adams' to Jordan Pefok on the U.S. goal buildup, Acosta and Adams far more played the roles of destroyers than creators. Their hustling helped the U.S. backline defend but added little inventiveness to the attack. The only good first-half U.S. chance was sparked by Sebastian Lletget. Overall, the midfield trio's attacking game plan seemed to be reacting to what became Brooks' passes out of the back, and cover for the outside backs' forays, which were too predictable to concern the Canadians much. Adams turned his average performance into a subpar one with an asinine yellow-card foul in the 70th minute that ended a promising U.S. counterattack as it surged for a gamewinner.

Christian Pulisic was fouled five times, not counting those that weren't whistled by referee Oshane Nation, such as the advantage call when Pulisic kept the ball moving in the buildup for the USA's goal. While the fouling stifled his dribbling, his ineffectual set-piecees were of his own doing. Pulisic hit the post with an off-balance shot in the 21st minute. Brenden Aaronson's hectic approach hampered him in the early going, but without his efforts the U.S. first-half would have been entirely unthreatening to the Canadians. And to score from close-range after starting the attack by winning the ball in the midfield impresses indeed. Two smart touches in the goal buildup by Jordan Pefok made up for his center forward appearance without a threatening shot.

DeAndre Yedlin didn't contribute enough to make up for getting beat on the goal. The other subs saw only 10 minutes of play, during which Josh Sargent's move drew a foul, for a free kick that Pulisic squandered.

TRIVIA: In its last six games, the USA has scored, on average, one goal every 114 minutes.