The USA recovered from a miserable first-half performance to notch an extraordinary 4-1 road win that will be remembered for one of greatest U.S. national team debuts in history: 18-year-old Ricardo Pepi scored the go-ahead goal and helped create the other three. 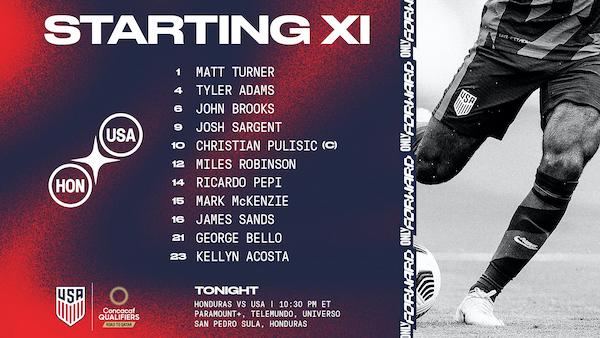 Matt Turner couldn't reach the Brayan Moya diving header from seven yards that gave the Catrachos a 1-0 lead. His impressive toss created a late first-half counterattack for Christian Pulisic. In the second half, Turner dived to save a well-aimed Marcelo Pereira header and left his penalty area to interrupt an attack as the Catrachos waned.

Central defender John Brooks, as he did against Canada, jogged in retreat as the USA conceded a goal. Against Honduras, his puzzling lack of urgency came after he badly mis-timed a tackle. Brooks was subbed at halftime, and Miles Robinson, whose clearance sparked the attack for the USA's equalizer, had no problem marshaling the middle without him. Left center back Mark McKenzie won the ball and surged forward to lay it off for Kellyn Acosta on the second U.S. goal.

Coach Gregg Berhalter badly miscalculated the ability of James Sands, impressive in central defense during the Gold Cup, to handle midfield duty against Honduras but the 21-year-old improved significantly after a first half of blunders. Kellyn Acosta fouled a game-high five times, but was fortunate that the Mexican ref didn't card at all. Like his teammates, he found his groove in the second half and was part of the go-ahead goal buildup. Right back Tyler Adams' move into his usual central midfield role was part of the U.S. late resurgence, and he capped his day of toil with a slick pass to Pepi ahead of the final goal. George Bello, who shot wide in the first minute and sent in a decent 24th-minute cross, was subbed at halftime.

Josh Sargent lost possession when he moved into midfield to accept passes and before his halftime exit made one highlight: his headed pass that Ricardo Pepi volleyed wide while off balance. Pepi settled a high ball near the center circle and held off Jose Garcia's challenge before passing to Christian Pulisic, who flew downfield during a crucial part of the equalizer buildup. Pepi reappeared to challenge for Sebastian Lletget's cross, which popped to Antonee Robinson, who made it 1-1. Pepi scored the go-ahead goal with a perfectly struck header, and he provided the pass for Brenden Aaronson's goal. Then Pepi took the shot that created a rebound for the fourth U.S. goal. Pulisic also kept Honduras on edge during the USA's first-half struggles.

One hopes Berhalter will start considering the value of having Cristian Roldan and Sebastian Lletget on the field at the same time. Besides being among the most clever players in the pool, Lletget on Wednesday sent in the cross on the equalizer, passed to DeAndre Yedlin for a hockey assist on the go-ahead goal, and scored the fourth goal, finishing the rebound off Pepi's shot. Roldan started the sequence for the third goal when his tackle sent the ball to Pepi. Antonee Robinson coolly finished a volley from seven yards to get the comeback started, and took part in the go-ahead goal buildup. Brenden Aaronson scored in his second straight game, putting the game out of reach with a confidently taken shot on a pass from Pepi.