The art of reffing solo

With the dire referee shortage increasing the chances of finding yourself without assistant referees presents an opportune time to republish this article on how to handle games solo.

The referee's position is called a "diagonal," which he or she runs goes from corner flag to corner flag.

Actually, a referee who strictly adheres to this diagonal will miss seeing a number of fouls. I like to think that the referee’s positioning isn’t a diagonal as much as it is a modified version of a half-open scissor -- corner flag to corner flag and penalty arc to penalty arc. The referee is not a slave to this positioning, but it is a rough guide to follow, especially for the newer referee. 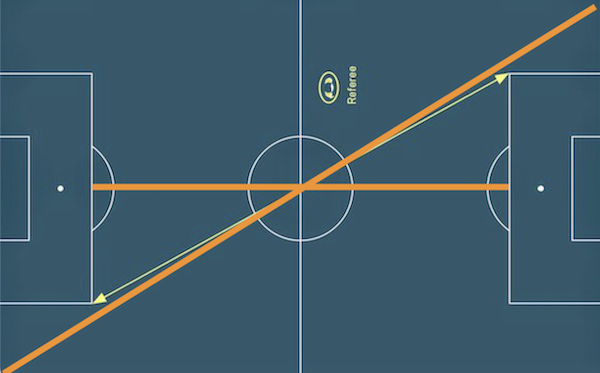 I remember refereeing a good youth tournament played at the Stadio Olimpico in Torino. On a rest day for me, I was able to watch the games from high in the almost empty stadium and saw a young ref, with potential, make the mistake of literally running from corner flag to corner flag, even if the ball was 50 yards away. He missed some fouls that would have been obvious to whistle if only he was closer to the play. You need not understand Italian to know that the coaches were unhappy with him.

Whether you are refereeing a game by yourself or with the use of assistant referees (ARs), use the half-open scissor as a rough guide for positioning.

Many youth referees start out officiating good games without the help of ARs. The great majority of my first 1,000 games were matches in which I was the only official assigned.

When you are the only official, should many offside decisions need to be made (such as when one or two teams are playing an offside trap or high defensive line), you should stay a bit closer to the touchline than usual, thinking about how the ARs, standing just outside the touchline, signal for offside. The side of the field is the best position for calling offside. Yet if you stay too close to the touchline, you will be in a poor position to call fouls.

They are not to signal direction as this can create a perception that they are cheating for the team they want to win. Make sure that you thank them both before and after the game as they are volunteering their time to help you.

Refereeing Around the Net