MLS: Big lead at top of standings gives Revs a cushion, nothing more for now 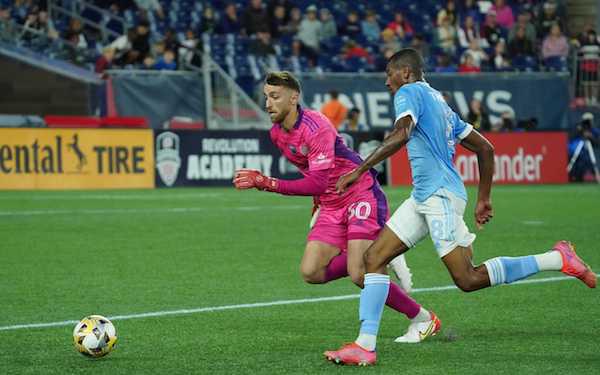 How good has the New England Revolution's season been?

The Revs' 2-1 victory over New York City FC before 19,481 fans at Gillette Stadium on Saturday night tied the club record for wins in a season with 17, and they still have nine games to play.

New England maintains double-digit advantages in the Supporters’ Shield race (10 points ahead of Seattle) and Eastern Conference (14 points ahead of Orlando City) although both teams have played two more games.

Still, New England coach Bruce Arena isn't about to allow his team get ahead of itself.

“We haven’t achieved any of our goals yet for the year," he said after the game. "We wanted to qualify for the playoffs and we haven’t done that yet. Until some mathematician tells me we’ve qualified, we’re not there yet. And we want to have a home-field advantage. So, we’re heading in that direction. Hopefully, we can do that."

The Revs continue to win the close ones -- they've won an MLS record 14 one-goal games -- getting goals by Emmanuel Boateng and Tajon Buchanan after NYCFC went ahead in the 11th minute.

Buchanon, who scored for Canada in Wednesday's 3-0 win over El Salvador in World Cup qualifying, has scored goals in his last four MLS games.

New England also welcomed back Matt Turner, who started all three qualifiers in goal for the USA, and Adam Buksa, who scored in his international debut for Poland in a 4-1 win over Albania and followed that up with a hat trick in a 7-1 win at San Marino.

Arena was impressed with how his trio of internationals returned to the Revs:

“This is new for Adam. It’s not new for Matt or Tajon. They’ve done it before. I was very impressed with Adam’s approach coming back. He didn’t come back from Poland until yesterday, so he had a real good approach to coming back to the team and all that. Matt’s pretty levelheaded. He’s done well and I’m very impressed with Tajon’s attitude. He’s done a real good job coming back into the team and being positive. And obviously, you see tonight, he got the winning goal."

The Revs face a crazy schedule -- four games in 11 days, beginning next Saturday against defending champion Columbus, then 17 days off for the October FIFA window followed four more games over 11 days before finishing the regular season on Nov. 7 against Inter Miami.

Arena said the cushion will allow the Revs to ease injured forward Gustavo Bou back into the lineup -- Carles Gil played his second game back on Saturday -- and to deal with the congested schedule.

"There’s still a lot ahead of us here," he said, "and then we hit the international break, which becomes a complete disaster in our league, these international breaks. So that’s going to be difficult as well. It’s nice to have a little bit of a cushion now. I’d hate to be scrambling to try to get one of the top seven spots and have to deal with all these other issues.”