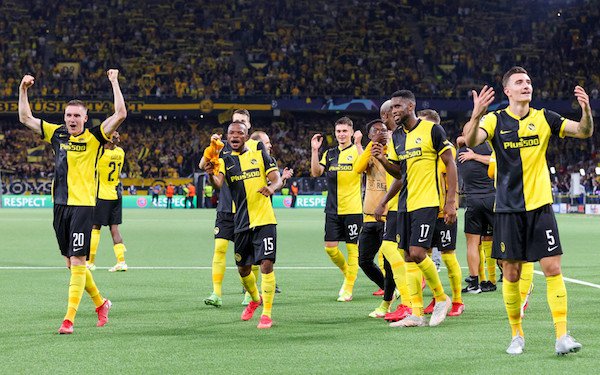 It was a day they will never forget.

Jordan Pefok, Brenden Aaronson and John Brooks all made their debuts in the UEFA Champions League on Tuesday, and they were eventful, to say the least.

Young Boys-Manchester United. Pefok (No. 17 in photo) was the star with the winning goal in the fifth minute of stoppage time for Young Boys, which stunned Manchester United, 2-1, in their group opener.

United was leading 1-0 on Cristiano Ronaldo's 135th goal in 177 Champions League games when the game changed on Aaron Wan-Bissaka's red card in the 35th minute.

Young Boys equalized on Cameroonian Nicolas Moumi Ngamale's goal in the 66th minute, but United appeared to have survived to earn a draw at the Stadion Wankdorf until Jesse Lingard decided to play a ball right into the path of Pefok, who came on to start the second half.

Pefok, who came into the game with six goals in 11 games for Young Boys, wasn't about miss his chance, and he coolly fired the ball past David de Gea for the winner to the delight of the crowd of more than 31,000 fans in Bern.

The Austrian champion should have won the game. Karim Adeyemi earned three penalty kicks for Salzburg, but it only managed to convert one of the them, allowing Sevilla to equalize through veteran Ivan Rakitic on a penalty kick of its own awarded via VAR.

Adeyemi, who was born in Munich to a Nigerian father and Romanian mother and represents Germany internationally, was the game's star, tormenting the Sevilla defense with his speed and dribbling.

“It was like every time they reached our area it was a penalty," said Rakitic. "You can’t commit three penalties in the Champions League."

Lille-Wolfsburg. Brooks was the biggest disappointment for the USA in the recent World Cup qualifiers, and he was sent off for his second yellow card in the game that ended in a scoreless tie, following a handball shortly after the hour mark.

Brooks struggled to deal with the speed of Lille's Canadian star, Jonathan David. The French champion, which was missing injured American Tim Weah, had a penalty overturned following VAT in the sixth minute of stoppage time.