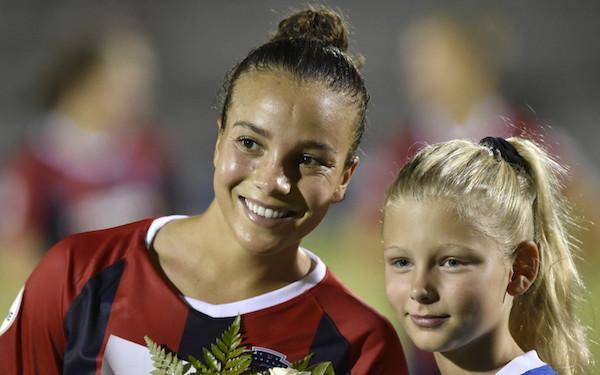 One chapter is closed, and another opens.

The USA begins a new cycle when it faces Paraguay Thursday at Cleveland’s FirstEnergy Stadium in the first of two international women's friendlies.

Yes, the women brought home bronze, but they failed in their goal to capture a fifth gold medal in seven competitions. The 2-2-2 record was their worst ever at a world championship dating back 30 years.

"These games are going to be really good for us, because it's just good to get the team together a month after the Olympics ended," said Alex Morgan, who has been a part of three Olympic efforts, in her media call on Wednesday. "We need to close that chapter and move forward."

The next championship won't be until the 2023 Women's World Cup in Australia and New Zealand, but qualifying begins next summer. Work on building a team after the Olympic disappointment had begun. It began with trying to get closure.

Morgan said Andonovski took the initiative on turning the page on the Olympics.

"After the Olympics," he said, "I was able to visit with every player on the team, individually, all the staff members and debrief with everyone. That chapter is closed, but obviously there are things from there that we have to address."

Morgan said the Olympics were mentally exhausting in so many ways and getting back together will help everyone put the Olympics behind them:

"Each player has their own timeline on closing that chapter. But I think coming in as a team, as much as some of us may have wanted to stay with our club teams, I think it's a really good thing for us to come in here and try to close that chapter collectively as a group and talk through the things that could have been done better and that were done well. And then also just knowing that we weren't alone in feeling the things that we felt throughout the tournament, the feeling of not playing well and not really living up to expectation that we had set for ourselves for this team."

For now, only Carli Lloyd has announced her retirement. But there will be other changes down the road. Only three players who weren't with the national team in Japan were called in for the Paraguay series: forwards Mallory Pugh (photo) and Sophia Smith and midfielder Andi Sullivan.

"What we need at this point in time," said Andonovski, "is a little bit more energy and more enthusiasm to kick us off our preparation for World Cup qualifiers."

Pugh, Sullivan and Smith aren't exactly newcomers. They have 86 caps among them.

"We are very excited to have some of these younger players back in camp," said Andonovski. "What makes us excited is the fact that they're in very good form. They're doing very well in the league, they're making an impact for their teams and helping their teams be successful."

Pugh played in the 2016 Olympics and at the 2019 World Cup but has not played for the USA since its 3-1 win over Japan at the 2020 SheBelieves Cup, the night before the sports world was shut down due to the Covid-19 pandemic.

"First, what is very important for Mallory is that she has been healthy for a long period of time," said Andonovski. "Second, her performances are what made us call her back."