Alex Morgan: 'We want to see what we can do at the negotiation table' 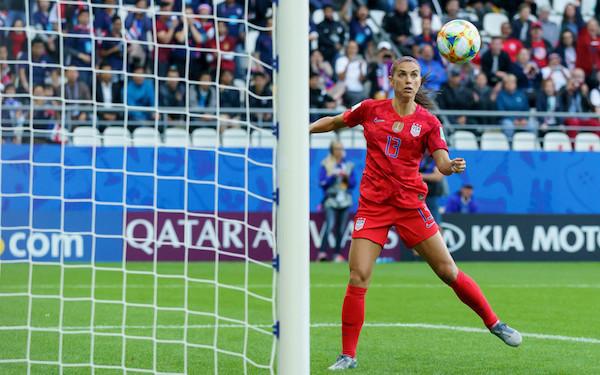 In the aftermath of U.S. Soccer's statement that it has offered players on the men's and women's national teams identical contract proposals for new collective bargaining agreements, U.S. star Alex Morgan was asked ahead of Thursday's USA-Paraguay game in Cleveland whether the offer will move the teams closer to equal or whether it was an attempt to divide the teams.

"Any commitment to equal pay publicly is good," she said. "However, we need to look line by line at what they're actually providing, because if you have equal, but it's not even what we got before or to the value that we are, then we still consider that to be not good enough. We will continue to work with U.S. Soccer moving forward, looking towards equal and fair payment and treatment."

The U.S. Women's National Team Player Association of which Morgan is a voting member tweeted that "USSF's PR stunts and bargaining through the media will not bring us any closer to a fair agreement. In contrast, we are committed to bargaining in good faith to achieve equal pay and the safest working conditions possible. The proposal that USSF made recently to us does neither."

The federation responded via its communications department on Twitter:

"An offer on paper of identical contracts to the USWNT and USMNT, and to discuss equalizing prize money, is real, authentic and in good faith. A publicity stunt is a 90-minute one-sided movie," in reference to "LFG," the HBO Max documentary about the women's equal fight, which has been focused on a lawsuit in federal court for more than two years but goes back many years before that.

Morgan, the named plaintiff in the equal pay lawsuit, said the players were in active negotiation with the federation to reach a new agreement on a collective bargaining agreement. The current agreement expires at the end of the year. (The agreement with the U.S. National Soccer Team Players Association expired at the end of 2018.)

"We don't want to start the new year without a new CBA in effect," she said. "That's the No. 1 priority of the PA and our legal team."

Was she encouraged by the statements?

"It's difficult to say. We want to feel encouraged and we want to be optimistic. But we have seen a lot of statements before. What we really want to do is see what we can do at the negotiation table, see those statements be put into action in those negotiations. So, of course, we're always hopeful. You have to continue to have hope."

Morgan pointed to the recent agreement by the Football Association of Ireland (FAI) with the Irish men's and women's national teams as an example of federations agreeing to equal pay for their female and male teams.

"I think we're moving in the right direction," he said.

The FAI agreed to play out the same match bonuses to men and women, but its statement simply referred to an "agreed equality of approach" on how to deal with payments from FIFA and UEFA for participation in World Cups or Euros.

The huge gap in payments FIFA and UEFA make to federations for the participation of their teams in men's and women's championships remains the issue federations around the world are dealing with.

U.S. Soccer has said it will not accept a deal with the men and women without an agreement to "equalize" the FIFA prize money.

The devil will be in the details about how to set equal bonus payments the men and women will agree to -- "to the value we are," as Morgan said -- and how to divide up moneys based on the differing fortunes of the two teams from World Cup to World Cup.