The USA, in its first game since its bronze-medal finish in Japan, faced Paraguay, No. 50 in the FIFA World Rankings and yet to qualify for the World Cup or Olympics. Carli Lloyd had the Americans up by two goals within six minutes of kickoff and she scored three more en route to the 9-0 win. Two U.S. starters weren't on Olympic squad: Mallory Pugh, who provided three assists, and Andi Sullivan, who scored twice and assisted once. 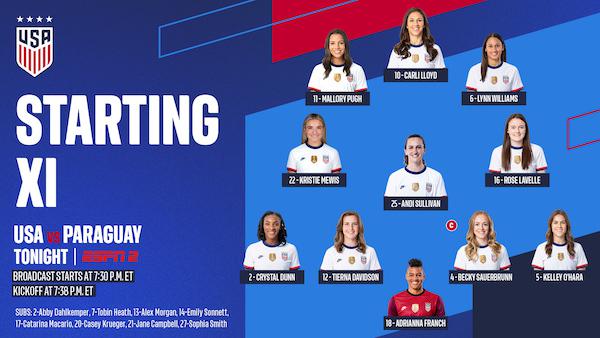 So profound was the mismatch that the USA managed a shot once every three minute on average while Paraguay mustered one strike toward the U.S. goal. It was blocked by a defender, but Adrianna Franch got to touch the ball when a 60th-minute free kick from the wing flew straight into her arms.

With Paraguay lacking an offense, the U.S. blackline could be judged only by attacking contributions. Tierna Davidson passed impressively out of the back at various ranges. Her crisp delivery to Mallory Pugh helped set up the second goal and she directly assisted Tobin Heath's goal with a perfectly timed and weighted cross-field pass. She also sparked the buildup on the sixth goal. Crystal Dunn supported the left-flank attacks by Pugh and Kristie Mewis and delivered a low ball from the wing to set up the second goal. Kelley O’Hara had one shot that also didn't threaten and hit an awful cross in the 73rd minute that went out for a goal kick on the far side, but she helped set up the fifth goal. Becky Sauerbrunn calmly patrolled the middle and even managed a couple shots, but, alas, she failed to score her first career goal. Her header went wide and her strike from the edge of the penalty area was blocked.

Andi Sullivan made the most of her first start since January of 2020. She pounced alertly to poke the ball over the goal line as defenders hesitated -- following a Kristie Mewis corner kick relayed by Lynn Williams -- and headed home early in the second half. In between, Sullivan's 24-yard rocket came off the crossbar and would have created a goal had Williams not been caught offside on the rebound. Sullivan's inswinging cross landed nicely for Carli Lloyd to stroke home. Mewis sent the cross-field pass from which Williams set up the sixth goal. Rose Lavelle played a subdued role amid the slaughter but helped out on the buildup on the fifth goal.

Carli Lloyd's seven shots produced one save and five goals, demonstrating remarkably efficient finishing in various ways regardless of the opponent's pedigree. Lynn Williams assisted twice and scored with a deflected shot. Mallory Pugh's excellent corner kick sparked the rout, her pass to Dunn helped set up the second goal, she evaded a defender before finding Williams on the fourth goal, and sent in the free kick that Sullivan headed home. Pugh also dribbled through from midfield with the dynamism that created much hype earlier in her career -- and one awaits hopefully that she can achieve that against stronger foes.

The second greatest scorer on the field wasn't able to seize the opportunities: Alex Morgan failed to beat the keeper with three close-range chances and squandered another by going offside. Catarina Macario assisted on Lloyd's final goal with a corner kick and provided service for one of Morgan's headers that was saved.  Tobin Heath wrapped up the scoring.