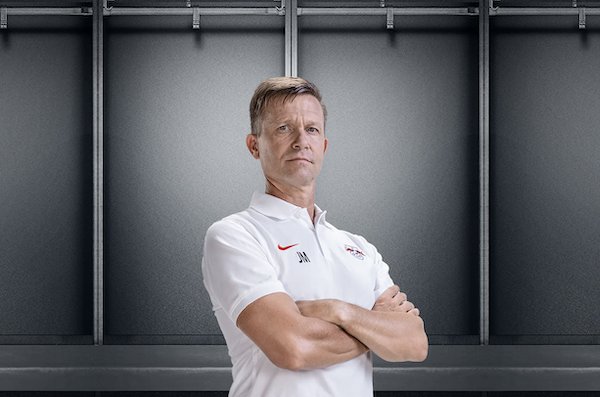 The Bundesliga's intrigue for American fans notched up when one of its top teams named an American head coach for the 2021-22 season. But hopes of following Jesse Marsch lead RB Leipzig in a title race quickly evaporated as it suffered its worst start to a Bundesliga season since winning promotion in 2016.

Marsch's European venture since moving on from New York Red Bulls head coach job in 2018 had progressed at near fairytale proportions. While he served as Ralf Rangnick's deputy, RB Leipzig claimed a UEFA Champions League spot with a Bundesliga third-place finish and DFB Cup runner-up medal. After one season, the parent company moved Marsch to Red Bull Salzburg, where he successfully continued its streak of winning Austrian league and cup titles for two more seasons.

A couple weeks before Marsch completed his back-to-back Austrian double, RB Leipzig announced he would return to for the 2021-22 to replace Bayern Munich-bound Julian Nagelsmann.

Last season, RB Leipzig remained in title contention with perennial champion Bayern Munich until the 32nd game day -- an exceptionally tight race by Bundesliga standards. After four games under Marsch, RB Leipzig finds itself in 13th place and the run has prompted a vote of confidence statement from Oliver Mintzlaff, Red Bull Head of Global Sports.

"I can only shake my head," Mintzlaff said when asked about Marsch's job security following its 6-3 UEFA Champions League loss at Manchester City last Wednesday. "We have a new head coach who we're proud of and committed to. We've only played four Bundesliga games, and although there were very poor results, we're not unsettled. We're convinced that we're on the right path, while fully aware that we need also in this season to qualify for [next season's] Champions League."

Two of RB Leipzig's Bundesliga losses came against strong opposition, nine-time defending champion Bayern and current leader VfL Wolfsburg. (Its only win came against the other Bundesliga club coached by an American, Pellegrino Matarazzo's VfB Stuttgart.) But last year, RB Leipzig tied Bayern 3-3 and lost 1-0. The lopsided loss to Bayern followed by the debacle in Manchester has set off alarm bells.

"Four losses in five games, a whopping 10 goals conceded in the latest tests against Munich and Manchester City: RB Leipzig has with its new coach Jesse Marsch maneuvered into dangerous waters. ... In both games the Saxons left the impression they're neglecting the importance of defensive work. A fatal trend."

Before the loss to Manchester City, SportBild claimed "some leadership players" want to return more elements from Nagelsmann's possession ball, because Marsch's insistence on aggressive pressing has created too many counterattack opportunities for its opponents and one-on-one situations for its defenders. SportBild also cited anonymous complaints from players feeling neglected while Marsch favors U.S. midfielder Tyler Adams and Hungarian Dominik Szoboszlai, who arrived with Marsch from Salzburg. (However, Adams didn't play in the big loss to Bayern upon returning from national team duty.)

Marsch says that despite the early setbacks, the team's mentality is strong, its fighting spirit healthy, and his players are prepared to bounce back.

"Our goal before the last two games [vs. Bayern and Manchester City] was to learn from them," he said, "and we have. We believe in the process, and I believe we learned a lot. We need more focus and discipline in the right moments."

RB Leipzig's next three opponents -- FC Cologne, Hertha Berlin, Bochum -- are for less formidable than the Bundesliga teams it lost to so far, presenting an opportunity for Marsch to steer the team back up the standings -- and change the narrative.