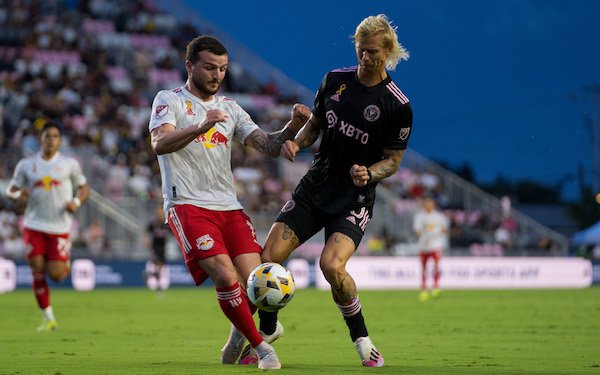 That screeching noise you heard on Friday night in Fort Lauderdale was the brakes being put on the Inter Miami hype train.

Inter Miami was the hottest team in MLS with five wins and a tie in its last six games and shutouts in its last four. Since its return from the July FIFA break, the second-year MLS club was 7-2-3, climbing from last place to eighth place with a game in hand on the three teams ahead of it in the Eastern Conference. Another win would have moved Inter Miami into fifth place.

The buzz around the team was even felt in the South Florida soccer community. Inter Miami drew a record 18,535 fans -- a full-capacity sellout -- at DRV PNK Stadium Friday night only to booed off the field after the fans watch it fall to the New York Red Bulls, 4-0.

Yes, that Inter Miami hype train went off the rails.

Inter Miami coach Phil Neville insisted the defeat was just a bump on the tracks:

"I’m sure that this is just a one off because of the fact that we’ve been on a good run. The confidence is high, we’ve got momentum. There’s going to be plenty of twists and turns left in this season."

But the match was totally one-sided. The Red Bulls dominated the game throughout, finishing with a 27-2 edge in shots. There were signs of trouble early.

In the 9th minute, Christian Makoun had to track back and clear Patryk Klimala's shot off the line.

But Inter Miami had not seen the last of Klimala, the 23-year-old Young DP signed from Celtic. In the 18th minute, he put the Red Bulls ahead on a pass from 18-year-old Wiki Carmona. They extended their lead to 2-0 in the 31st minute on a goal by Omir Fernandez.

Inter Miami's first-half misery continued in the 38th minute when Argentine Nicolas Figal was handed his second yellow card of the match and sent off.

The Red Bulls completed the rout with a pair of goals by Brazilian Fabio in the second half.