In limbo off the field, Real Salt Lake finds its footing 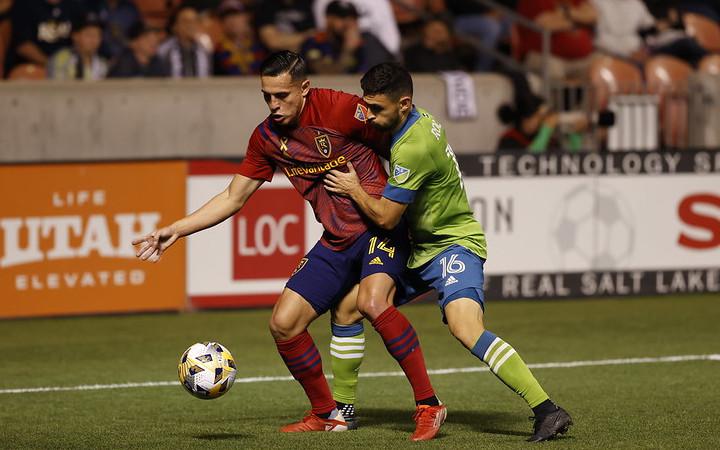 Given all it's been through in the last year, Real Salt Lake probably has no business being in the MLS playoff hunt.

But RSL moved into fifth place in the Western Conference thanks to its biggest win of the season, a 1-0 victory over the Seattle Sounders before 19,850 fans, the largest crowd at Rio Tinto Stadium in almost two years.

At the beginning of the year, MLS took over the sale of the Hansen's soccer holdings that also include the USL Championship's Real Monarchs, Rio Tinto Stadium, the $78 million Zions Bank Training Center in Herriman and the RSL academy that includes a residency program and charter school.

In the interim, two other MLS teams -- Orlando City and the Houston Dynamo -- have been sold, but the search for a Real Salt Lake buyer continues.

John Kimball, a former RSL executive, was brought in to serve as interim president and run the business side but as he recently told the Salt Lake Tribune, “This last year has felt like five years to me."

RSL has been also in limbo on the sidelines.

In late August, head coach Freddy Juarez moved to the Sounders, where he is an assistant coach. Pablo Mastroeni is serving as interim coach while a search for a new head coach continues.

RSL lost its first game after Juarez's departure, 4-1, at Vancouver. But it has now won three of its last four games, dropping only a 3-2 decision to LAFC last Sunday on an own goal.

Defense has been problem for RSL -- it conceded 12 goals in its last four games -- so the shutout win over the Sounders was a turnaround.

Mastroeni said a move into a 3-5-2 formation provided more attacking options from RSL's wing backs, Aaron Herrera and Justin Meram, and he praised the focus of Erik Holt, Justen Glad and Toni Datkovic on the backline.

“They gave up very little and defended the area late when we were taking a lot of free kicks," he said. "They made it look easy, but it took a lot of work and concentration. Those are some things I ask when we are defending, that we stay focused in those moments and tonight they did a great job of that.”

Damir Kreilach, who scored his team-high 10th goal of the season for the win, praised Mastroeni for the formation change:

“I think overall with the 3-5-2 we have more guys around the second ball. The second ball as we know in football is the most important ball. Offensively, we have so many people in the box and around the box. Overall, when Pablo got this idea a few weeks ago, we took the idea very professionally. This is how we found ourselves right now. We have to keep going. Every game we have to minimize our mistakes and that is how we’re going to get results.”