'The Barcelona Complex,' starring Cruyff and Messi, details the rise and decline of 'the world's greatest club'

Barcelona's 3-0 home loss to Bayern Munich in last week's UEFA Champions League group game hardly registered as a shock result. It came barely a year after Bayern hammered the Catalans 8-2 in the quarterfinal of the 2019-20 competition, defeats that sandwiched a 4-1 home loss to Paris St. Germain that led to last season's round of 16 UCL exit. Heavy away defeats to Roma (2017-18 quarterfinal) and Liverpool (2018-19 semifinal) had already highlighted the decline of a team whose prime players from its golden age a decade ago under Pep Guardiola had either retired (Carlos Puyol), left for a final payday elsewhere (Andres Iniesta, Xavi), or were becoming too old to keep up or track back (Sergio Busquets, Lionel Messi, Gerard Piqué).

What happened to one of the greatest teams in history that also formed the core of the invincible Spanish national team that won three consecutive championships (two Euros and one World Cup) between 2008 and 2012?

Simon Kuper partly attributes the team's fall to the $260 million transfer of Neymar to Paris St. Germain in 2017. Not only did they lose a star player, but the cash was not wisely reinvested. Knowing how much money Barcelona had available, Borussia Dortmund's representatives rushed them into paying $170 million for forward Ousmane Dembélé, a deal that's yet to pay off.

Equally symptomatic of an ill-judged transfer policy was the signing of unknown Brazilian midfielder Matheus Fernandes, a 21-year-old reserve player with Palmeiras, for $8 million early last year. He was immediately loaned out to Valladolid, where he made a total of three appearances. After playing just 17 minutes for Barcelona in a Champions League game at Dynamo Kiev, he returned to Palmeiras this summer for free. That's almost half a million dollars per minute, plus wages.

The Covid-19 pandemic, too many mediocre signings, and salaries driven high across the board by the increasingly astronomical sums paid every year to Messi all help to explain why Barcelona now have reported debts of almost $1.6 billion.

It doesn't completely explain, however, why the team has struggled on the field the past few seasons. Another factor is that the club's hallowed youth academy, the Masia (an institution covered in fascinating detail by Kuper), has simply stopped producing as many brilliant players, although there is hope that the next crop -- including Pedri (so strong for Spain at this past summer's European Championship), Ansu Fati and Yusuf Demir -- will come good in a handful of years.

Meanwhile, the expensive Dembélé has so far been inconsistent due to injuries brought on by poor lifestyle choices. Kuper notes that although Barcelona is the dream destination for most professional soccer players, the city's climate and culture present multiple temptations to a young man on lucrative wages. Low-key family men such as Messi and Iniesta were much easier to manage in an era where nutrition, abstinence and early nights had become crucial to avoiding injury and maintaining world-class performance on a weekly basis. It also helped that these players came through the youth system and were not only single-minded in their desire to win honors, they cared deeply about the club too.

Kuper begins his book at the roots of Barcelona's claim to being "more than a club" during the 1970s after it signed Johan Cruyff, who played for the team under his Dutch compatriot Rinus Michels. "Cruyff created the great Barça," Kuper writes. "In the words of his chief disciple Pep Guardiola, he built the cathedral. More than that, Cruyff arguably created modern soccer itself." On the field - with Cruyff as player, and then as coach in the 80s and 90s -- Barcelona adopted and adapted the Dutch concept of total soccer, later perfected under Guardiola with his team of diminutive geniuses. Off the field, its fan club of 150,000 socis ensured that Barcelona "is a genuine club: a local voluntary association of members" in the Catalan tradition of strong trade unions and cooperatives. 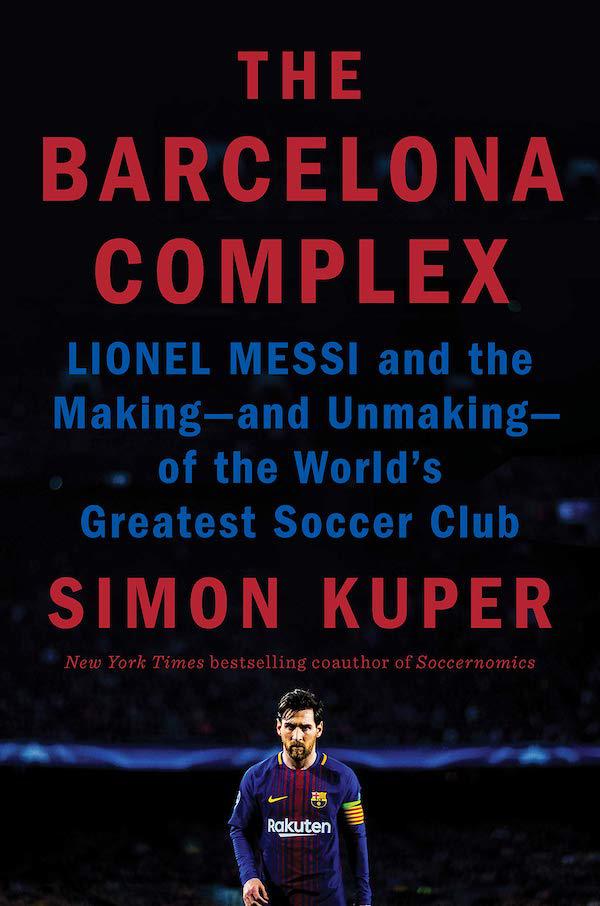 The author set out to write a book exploring what has made Barcelona so special, and the chapters on the Cruyff and Messi years are a captivating read. In tandem with the Masia and its sensitive nurturing of small, skillful players, the two men have been central to Barcelona's reputation and success. Kuper's research, however, coincided with the fall outlined in the opening paragraph that has gone hand in hand with bitter intra-club political turmoil, and leads him to the regretful conclusion that it's no longer more than a club, it's more like just another mega-brand in the mold of Real Madrid or Manchester United.

Alongside the on-field decline, things began to go wrong when the 2013 sponsorship deal with Qatar Airways was signed. "A tension arose that has only worsened since," Kuper writes. "Barça was trying to turn itself into a global entertainments business while remaining a Catalan-nationalist social club." He might also have mentioned that Barcelona was one of the primary movers behind this year's failed attempt to found an exclusive, no-relegation European Super League.

He also describes attending a Barcelona home game with his kids a couple of years ago, paying $72 per ticket to see a game with several thousand other 'tourist fans,' largely void of atmosphere in a stadium one-third empty, but during which Messi typically tallied two goals and two assists. While his kids had a great day out, Kuper knows that for many locals the price is far too high to watch a team that purports to represent so much more than a mere collection of talented sportsmen.

It also made me glad that I avoided the Camp Nou when in Barcelona as a tourist last year. Kuper draws a parallel between the club and the city's still unfinished Sagrada Família, designed by Antoni Gaudí -- the only part of my visit to Barcelona that left me scratching my head and wondering why I'd stood in line and paid money to witness something so wasteful and bombastic. Art critic Robert Hughes described the cathedral as "rampant kitsch," words you could also apply to the marketing of modern soccer. Kuper notes that "though Gaudí's vision survives him, nobody is entirely sure what it is." For Gaudí, read Cruyff.

Kuper skillfully collates what many will already know of the Barcelona story, and then adds his own insight, interviews, anecdotes and analysis. This is not a great soccer book, because much of this territory has been explored, but it's a very good one, and in the current bloated market that makes it an exceptional read.

• The Barcelona Complex: Lionel Messi and the Making - and Unmaking - of the World's Greatest Soccer Club by Simon Kuper (Penguin Press) Available in hard cover and Kindle.

barcelona
9 comments about "'The Barcelona Complex,' starring Cruyff and Messi, details the rise and decline of 'the world's greatest club'".
Read more comments >
Next story loading