My thoughts and opinions about soccer, a somewhat incoherent bustling jumble, from nearly 80 years of watching the sport, received a jolt on Sunday morning.


Jimmy Greaves was dead, at age 81, and the bubbling chaos of those soccer memories was stilled as they found their focus -- Jimmy Greaves, the man who was, for me, the greatest Englishman ever to play the sport.

Even as I typed that, I knew it was wrong. I never thought of Jimmy as “a man.” It was a Saturday afternoon, long ago -- over 60 years ago, 1957. I was living in London and I spent that afternoon at the Tottenham ground, watching Spurs play Chelsea.

I’m struggling with my memory. Did I know that Chelsea were giving the 17-year-old Greaves his debut game in the 1st division? Or am I inventing that bit? I’m not sure.

I’m pretty sure, though, that I noticed this kid -- after all, he scored Chelsea’s goal in a 1-1 draw. That was the least of it -- I noticed Greaves for reasons that only became clear to me later. Something about the way he played -- the style of the boy.

The boy. That impression never changed. Jimmy always seemed to play like, to be, a teenager. Not a big boy, average height, slender. Cool and calm -- especially so when it came to those vital seconds immediately before scoring. Quick as lightning.

His prolific goalscoring soon made him a teenage star. He became “Greavesie” in the fatuous nursery slang of the English pro game. He remained Jimmy to me, but I made my own nursery connection -- Jimmy was the Peter Pan of my soccer memories, forever a boy.

And forever a goalscorer. That was odd. Back then the goalscorers in England were the center forwards -- and they were invariably big burly guys who played a physical game. (They also, to my father’s great disgust, tended to part their hair down the middle).

A decade earlier my closest friend had been Leon. He played center forward for his high school. I chided him about that -- told him that center forwards were at the bottom of soccer’s IQ gradings, that all they did was charge about banging into people.

The criticism upset Leon. I could see that he was hurt, so I listened as he explained some of the intricacies of center forward play. Thus, it was Leon, at 17 a year younger than me, who started me thinking more intelligently about the game. I asked him “But who actually plays like that, name me a player.” “Only Arsenal’s Reg Lewis,” he replied.

So I started to pay attention to Lewis. The press tended to refer to Lewis as “the footballing center forward,” meant to indicate that there was more to his play than sheer strength. I was at Wembley in 1950 to watch Arsenal win the FA Cup with a 2-0 win over Liverpool. The Official History of the FA Cup records “two beautifully-taken goals by Lewis, their cultured center-forward”.

Cultured? I’d say so. Most importantly, he clearly liked the ball on the ground. Just as I was beginning to discover a soccer style that thrilled me, a string of injuries led Lewis to quit the game in 1953. It took four years for my enthusiasm to be rekindled -- by the 17-year-old Greaves. 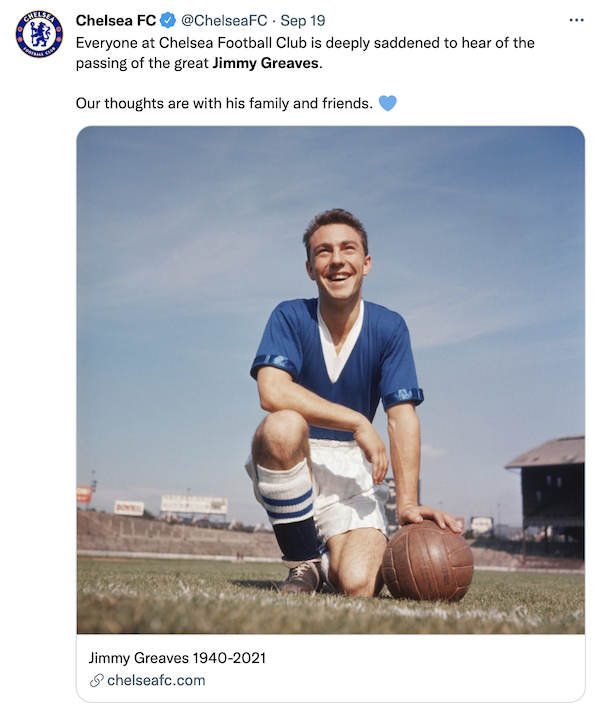 His scoring record was phenomenal -- you can look it up, as Casey Stengel would have told us. With Chelsea (124 goals in 157 league games) and later with Tottenham (220 goals in 321 games). In between came the brief time spent in Italy with AC Milan. Jimmy wanted to get back to England almost as soon as he arrived in Italy. Yet, unhappy as he was, he managed to score 9 goals in the 12 games that he played there.

In 1957, it was Jimmy Greaves who revived my liking for soccer played on the ground. The next summer, I sat in my London apartment squinting at a black-and-white TV screen. Spidery little figures were chasing a soccer ball. A ball that evidently knew its place. On the ground. I was watching Brazil, with Pele, win the 1958 World Cup.

I had never seen soccer like this. This was not just an isolated Reg Lewis or Jimmy Greaves showing me how the game could be -- surely, should be -- played. This was a whole team that wanted the ball on the ground, where, I thought, they could do almost anything with it.

That seemed especially true of Pele, who dazzled with a version of soccer that just bristled with exciting skills, trickery -- and what I later came to recognize as artistry. For the third time in 10 years it was a 17-year-old boy who was fashioning my soccer thoughts.

Of course, my discoveries came the wrong way round. I should have been aware of Brazilian soccer before I saw Jimmy play. But Jimmy and Reg Lewis came first for me, harbingers of delights to come.

I didn’t get to see a lot of Jimmy in person -- and there was a lot to see. The goals came in sudden extravagant bursts. At the beginning of the 1958-59 season, age 18, he hit five against Wolves. He did that again the following year, against Preston North End.

In 1959 I decamped for New York. There was next to no soccer on American TV, so I followed Jimmy’s incessant goalscoring by reading English newspapers. Not the real thing, for sure, but there was excitement for me in those printed reports. By then he was playing for England, too. In April 1961 he got a rollicking hat trick as England annihilated Scotland 9-3 at Wembley.

Jimmy’s bubbling, joyous, boyish spirit was infecting the national team. I’ll stretch this a bit -- because that game produced one of the best soccer jokes. The hapless Scottish goalkeeper who saw nine English shots flash past him into the net was Frank Haffey. The joke went like this: “Question: What time is it? Answer: Nearly 10 past Haffey.” Jimmy came close to making the “nearly” unnecessary -- he did score a 10th, but it was nixed by an offside call.

I happened to be in England in the summer of 1966 -- the year England staged the World Cup. I got to thinking that maybe I would see Jimmy lead England to triumph.

Poor Jimmy. Coach Alf Ramsey was of the new breed, picking his players to suit a specific role in his style. Many doubted Ramsey would even include him in the roster. He did -- but Jimmy got injured in the third game. He was fit enough to play in the final, but by then Ramsey had a winning team. Jimmy’s replacement was Geoff Hurst, a tall, strong, unsophisticated center forward. Did Ramsey make the correct decision? Hurst got a hat trick in the final against Germany, so obviously he did.

It was a bitter disappointment for Jimmy. Things got worse. He became an alcoholic. His soccer career faded away in short spells at a number of small clubs. By 1980 it was over. But Jimmy had conquered the alcoholism and now he found a new life as a wildly popular TV soccer guru. His fame spread, and he starred in other, non-soccer TV programming.

I saw just one of his soccer TV programs. I saw again Jimmy the Lad, all the puckish liveliness, the projection of a sense of humor and of how much he was enjoying himself. Once it was playing soccer, now it was as a TV star.

Technology started to change our lives. Videos arrived, and I could now see a lot more of Jimmy in action on the field. My admiration for this remarkable player should have grown as the videos opened up a much more intimate look at his skills. Strangely, they didn’t make much difference. What Jimmy did was always clear to see. It was the cat-like anticipation and reaction, plus his smooth ball control that reversed the age difference, and made Jimmy a man among boys.

For all that, I continued to think of him as a boy genius. There is a very good reason for that. Jimmy Greaves did not improve with age. He had no need to. It was all there right from the start. But rarely has the mantle of genius been so easily, so naturally, worn.

So, RIP Jimmy, the boy and the man. Soccer was never a dull game, could not possibly be, when you were on the field.