On Tuesday, the USA beat Paraguay 8-0 in a rematch against the massively over-matched foe that fell 9-0 to the Americans last Thursday. The games gave veterans who disappointed at the Japan Olympics a chance to be celebrated, but also gave 21-year-old Catarina Macario her first 90-minute appearance. 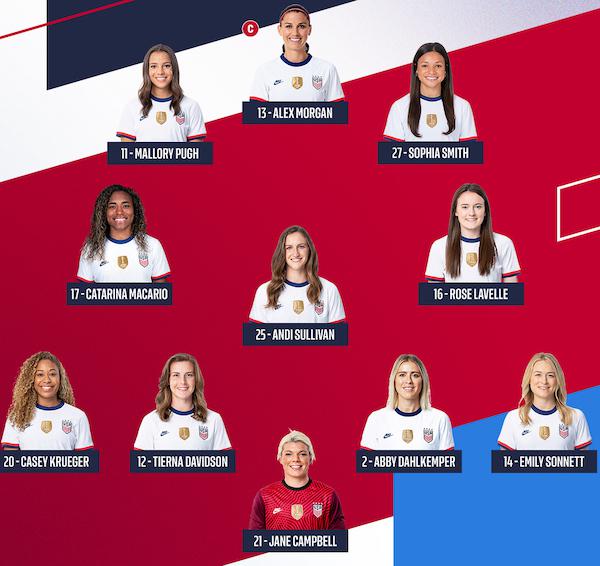 In game in which goalkeeping was unnecessary for the USA -- Paraguay's one shot may not have reached the goal line had Jane Campbell not picked it off the grass -- her highlight came with a crisp accurate delivery to the wing from a back pass.

Right back Emily Sonnett, who surged deep in Paraguay territory, helped set up the third goal. Left back Casey Krueger's cross set up the opening goal. Abby Dahlkemper's cross led to the fourth goal. Tierna Davidson won a header that sparked the counter on goal No. 2 and passed with poise throughout.

Rose Lavelle, who opened the scoring with a header, served a playmaking role from the get-to, and set up three of the next four goals. Her assist on the fifth goal came after she stole the ball within two passes of Paraguay's kickoff. Catarina Macario -- who saw the field for six minutes at the Olympics -- early on lost some balls with heavy touches, but she won plenty, finished cleanly on the USA's fifth goal, delivered a perfect cross in the second half that Sophia Smith headed to the keeper, and her second goal was a wonderfully struck volley from 19 yards. Andi Sullivan, whose bad touch bounced off a defender to set up Alex Morgan's second goal, played a subdued role in the shadow of dynamic Lavelle and omnipresent Macario.

Alex Morgan rediscovered the scoring touch that had eluded her in all but one of her six Olympic appearances in Japan. Her hat trick consisted of a header, a volley and half-volley, all from pouncing adeptly on close-range chances. The 21-year-old Sophia Smith scored her first U.S. goal in the sixth minute and assisted on Morgan's 53rd-minute goal. Mallory Pugh sparked the attack on the second U.S. goal.

Carli Lloyd scored from two yards out after goalkeeper Alicia Bobadilla punched instead of catching a Macario free kick that went straight to her.