I was watching Aston Villa play Everton. It had been a totally insipid first half. A big yawn. TV commentator Lee Dixon  summed up: “There’s not been a huge amount of goalmouth action,” -- he certainly got that right -- “But it’s been an interesting game just to see ‘em both going at each other, trying to work one system against the other."


Dixon ended his summary with “they’re still trying to break down each other’s system.” Which was all wrong. It had not been even remotely interesting. What’s interesting about systems? Who watches a soccer game because he wants to watch a system?

As it happens, I had recently been reading one of Clive James’ essays -- brilliant as usual -- in which he discussed literary criticism. He quoted Byron: “When a man talks of system, his case is hopeless.” Way to go Lord Byron. Then James added his own gentle, but damningly trenchant, comment: “[Systems] are usually ways for mediocrities to make themselves sound interesting.”

OK, neither Byron nor James had soccer in mind but they managed to nail it as far as the place of systems in soccer goes. Hopeless and uninteresting.

My own feeling is that systems - by definition, rigid and programmed -- do not belong anywhere near a sport that is at its incomparable best when cherishing original, creative thinking and improvisation.

So much for systems. Well, not quite. For in that same Aston Villa-Everton game there was an incident that shone some -- no doubt unwelcome -- light on a system. Not a soccer system, but one that is used by the sport.

The concussion protocol. Five minutes into the game Villa midfielder John McGinn took a whack to the head. He played on for 20 minutes, then took another knock. On came the medics. According to the BBC report, McGinn was “given tablets” and stayed on the field.

I was unaware that the protocol allowed the use of drugs. But McGinn played on for another 10 minutes until with just five minutes left in the half, he signaled that he couldn’t continue, because he felt dizzy.

That the protocol is often not being taken seriously, and not properly administered, has been pretty obvious for some time. Even so, there has seemed to be a general agreement that any player who suffers a possible concussion should not continue playing, because a second bad knock could have serious consequences.

In McGinn’s case, we have a situation in which either the medic’s assessment of the player was faulty (an error that might be due to the protocol system rather than the medics involved), or coach Dean Smith preferred to listen to the player’s “I’m OK” claims (Smith said his decision to leave McGinn on the field -- twice -- was “guided by the player.”). But, surely, concern for the player’s safety should have been the priority here.

Soccer’s thoughts and actions on head injuries are utterly chaotic. We are back to goalkeepers and their traditional habit of diving head first at the feet of opponents. Anyone can see that is asking for trouble. Anyone except FIFA and IFAB -- and, sadly, their agents, the referees.

I bring the referees into this because of a recent such incident in the MLS game between Miami and the New York Red Bulls. A loose ball in the New York penalty area. Miami’s Gonzalo Higuain races toward it, sticking out his leg to control it. At the same time New York’s goalkeeper Carlos Coronel races for the ball and flings himself forward to grab it, on the ground, with outstretched hands. 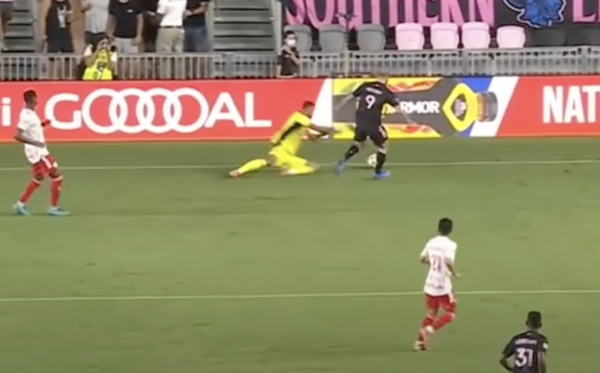 Both players had every right to go for the ball. The replays show a dead heat: Higuain’s foot and Coronel’s hand made contact with the ball at the same instant. Maybe someone could make a case for Higuain having -- just -- got there first -- but the argument would be no stronger than claiming Coronel won the race.

The forward impetus of Coronel’s dive instantly took his head into Higuain’s path. Inevitably, Higuain tripped over Coronel. As he fell, Higuain’s foot made contact with Coronel’s head.

Referee Guido Gonzales Jr. was there immediately, whistle trilling. Free kick to New York for a foul by Higuain. To underline his decision, Gonzales showed Higuain a yellow card. 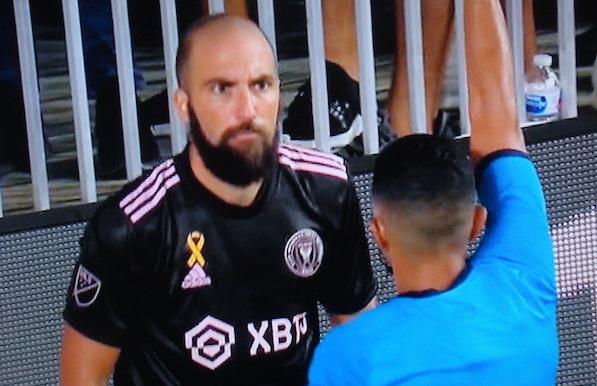 Higuain’s face, dramatically captured on TV, was a wonderful study of barely suppressed outrage and aggressive indignation. He was right to be miffed. The referee’s call was atrociously bad. What had Higuain done that was wrong? Nothing. Nothing at all. He had challenged, not in any way recklessly, for a loose ball that he believed he could reach and control.

The player at fault was goalkeeper Coronel. If flinging yourself head first at an opponent’s feet does not constitute “playing in a dangerous manner,” then where on earth can the line be drawn? The perverse fact that it is the culprit -- the goalkeeper -- who got hurt is comprehensively and incontestably covered in Rule 12's definition of Playing in a Dangerous Manner: “any action that while trying to play the ball, threatens injury to someone (including the player themself) ...” Coronel received treatment on the field. He was declared fit enough to remain in the game.

I have been scanning the PRO website (the MLS referee’s website) wondering if they might see fit to face up to a very bad error by one of their referees. Wondering, but not seriously expecting to find anything. Which is what I have found. Nothing.

Yes, this is a difficult one for Howard Webb, the referee boss. But dodging it hardly helps. In legal parlance (well, referees are fond of pompously talking about Laws), law that is not enforced is bad law. How about it, Howard?

Help could also be given in another area of goalkeeper behavior -- their habit of charging forward to punch the ball and, with raised knee, smashing into anyone who is in their way. My thanks to Everton and England goalkeeper Jordan Pickford for supplying an almost perfectly posed picture of this goalkeeping technique. During an Everton-Burnley game, Pickford started to launch such an assault, as a cross came in. But the cross was too high. Pickford changed his mind, and slowed down. The approaching Burnley forward Chris Wood had also slowed his approach. 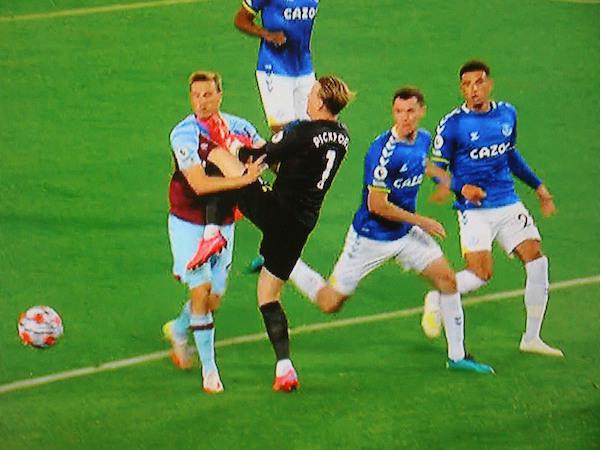 The two players made light contact. But Pickford had not relaxed his attack stance. His knee was raised high, comfortably nestling into Wood’s chin area. At full speed that knee could have inflicted a serious head injury on Wood. Obviously, Pickford didn’t care.

(And before you accuse me of being harsh on Pickford let me lodge a reminder. It was Pickford who, a year ago, launched an ugly, wild and reckless tackle against Liverpool defender Virgil van Dijk. The resulting injury meant that van Dijk did not play for Liverpool again for the rest of the season, and did not play for the Netherlands in this year’s Euro 2020.)

Charging with a raised knee into an opponent is always at least careless play. More than likely it is worse -- classifiable as “endangering the safety of an opponent.” In any case, it must result in a penalty kick call against the goalkeeper. And how many of those do we see?

Speak up, Howard. And if all this evidence of refereeing malfeasance proves too much for you, how abut some help on something less controversial: what is a referee expected to do when a player is reckless enough to foul one of his own players?

I am indebted, yet again, to the goalkeeper brotherhood for a splendid recent example of such play. A Concacaf game. We’re in the 11th minute of the USA-Honduras World Cup qualifier. A long pass forward by the USA, up to Christian Pulisic. Despite there being two defenders to deal with Pulisic, the Honduras goalkeeper Luis Lopez sensed danger and came charging some 10 yards outside his penalty area, where, at full speed, he leaped into the three players to head the ball away. Knee raised, of course.

Pulisic had seen the danger coming, and got himself out of the way, but Lopez absolutely creamed his own defender, Marcelo Pereira. It looked bad, very bad. Referee Fernando Hernandez Gomez, from Mexico, immediately called on the medics. Somehow or other, Pereira escaped serious injury and was able to continue. 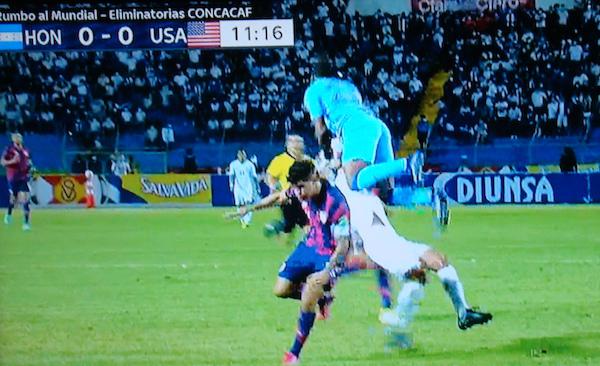 The question for our referee bosses is this: what should a referee call when a player is clearly guilty of reckless play -- but against a teammate? The rules talk only of punishment for “endangering the safety of an opponent” (my italics).

Has the culprit committed a foul or not? If so, what is the punishment? If, in the case under study, the goalkeeper had violently flattened his goalkeeper inside his penalty area, what then? Reckless play by a defender in his penalty area demands a penalty kick. But it offends common sense that a penalty kick could be called when no player from the attacking team was involved.

In this case, referee Hernandez Gomez, restarted the game with an (uncontested) drop ball for Honduras. That doesn’t seem right, as it implies that Honduras was in possession of the ball before the incident (it was not), and seems to suggest that the USA was responsible for the incident (it was not; no U.S. player was involved).

Some questions -- serious, important ones -- for Howard Webb. He is an authoritative voice for referees and the rules. And he has a nice platform -- the PRO website -- on which to publish his answers. Or, at least, his opinions on the matter.

Problem. Is Webb allowed to have an opinion of his own, or must he first make sure with IFAB that he is merely echoing their view? If that is the case -- and I fear it is -- then we’re in for a long wait. Masterly inactivity has long been IFAB’s modus operandi.