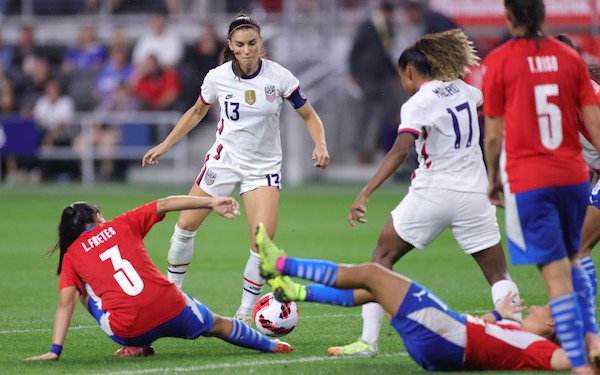 The U.S. women's national team has a scheduling problem.

Within minutes of the opening kickoff in Cleveland, it was evident these two matches would be no-contests. I tweeted that the USWNT has had to line up a lot of bad teams in the last year, but Paraguay was the worst. I got pushback from some women's soccer supporters, calling me "mean" and a "gringo" who tweeted stupid things about an underfunded team.

Both USA-Paraguay friendlies ended up being blowouts. Indeed, the USA has never before won back-to-back games by eight or more goals outside of qualifying play within Concacaf.

Why play games against a clearly inferior opponent when the USA needs to start rebuilding its national team following the disappointment of Olympic bronze?

First of all, the process of building toward the next big event, the USA's defense of its World Cup title in 2023, won't begin until November. As part of its collective bargaining agreement with the USWNTPA,  U.S. Soccer is obligated to call in the 22 players on the Olympic team. (They can opt out on their own, or pull out if injured.)

Three players who weren't part of the Olympic roster -- Mallory Pugh, Sophia Smith and Andi Sullivan -- were added as replacement players, and they did quite well, combining for three goals and five assists in the two wins.

Frankly, U.S. Soccer didn't have many good options if it wanted play a pair of home games during the September window. (Olympic gold-medalist Canada didn't even play at all.)

The Covid-19 pandemic hindered scheduling during the pre-Olympic preparations. Japan pulled out of the 2021 SheBelieves Cup and was replaced by Argentina. Following the SheBelieves Cup, the USA played five warmup games at home, and none was against a team bound for the Olympics. It won them all by shutout, which brushed over many of the problems it was going to have at the Olympics.

Hopefully, Covid-19 won't be around forever, but some fundamental issues on the women's soccer landscape will remain.

More and more, the balance of power in women's soccer is concentrated in Europe, which limits the U.S. Soccer scheduling options if it wants to play the best competition and continue to play most of its games at home, all for good reasons: build its fanbase, reward its players with matches before huge crowds, often in their hometowns, collect hefty ticket gates and fulfill commercial obligations (on-site activations).

The problem is, most of the best teams in the world are based in Europe. And no other confederation offers the year-round programming for women's national teams that UEFA does. It is the only confederation that offers home-and-away group play for Women's World Cup qualifying and well as for qualifying for the Women's Euros.

For the next year, it will be almost impossible to schedule European teams as just about every UEFA window is taken up with World Cup qualifying. (There are a few byes during which the USA could play European teams, but it would involve playing in Europe.) The big exception is the February 2022 window when the USA hosts the SheBelieves Cup.

European federations are also getting into the act of organizing tournaments of their own, however. England, the Euro 2022 host, has already lined up Germany and Spain for its new four-team tournament. The French federation started its own women's tournament in 2020 but had to scale back its 2021 tournament when two teams pulled out due to the pandemic.

There are, of course, a few teams outside Europe that can offer competitive matches. Canada, Brazil, Australia and Japan, all past participants in U.S. Soccer's SheBelieves Cup or Tournament of Nations, come to mind. For the USWNT to get the year-round competition it needs to remain at peak form, those numbers have to grow.

In many ways, the problem is not dissimilar to what is going on on the men's side. The push to add more confederation competitions (Concacaf Nations League, UEFA Nations League) has forced the USMNT to accept a steady diet of Concacaf opponents and all but eliminated opportunities to play friendly games.

On the women's side, the USWNT won't be tied down to entering the qualifying stages of Concacaf's two new women's competitions, but it does need for the level of play to rise dramatically across Concacaf and Conmebol, where women's soccer has been historically neglected.

Funding is increasing, though. The September window saw unprecedented activity among Concacaf and Conmebol teams. USA-Paraguay was just one of six friendly series that took place.

It might take generations for national teams like Paraguay to be competitive, but it's in the USWNT's interest to accelerate the process.

In a few cases, it might take shaming the federations of opposing teams by exposing the gap that exists.