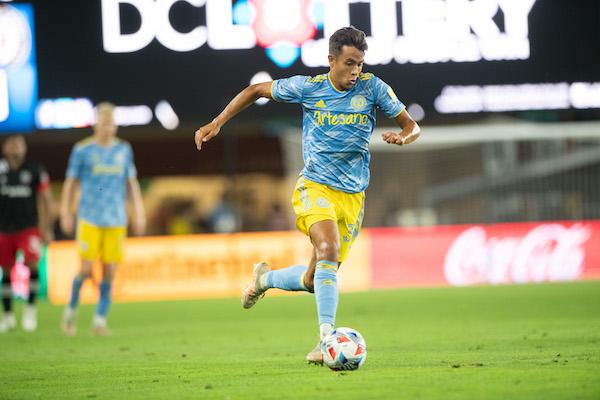 The early days of the Philadelphia Union weren’t great. Starting with its inaugural season in 2010, the Union made the MLS playoffs three times in its first nine seasons but failed to win a postseason game. It really wasn’t until 2019 when the club’s fortunes began to change with a playoff win that year, followed by the Supporters Shield in 2020, and a run to the Concacaf Champions League semifinals so far this season in 2021.

Part of the reasons for the improvement was the development of a club identity that was centered around undervalued foreign imports, savvy veterans, and -- perhaps most noteworthy -- a strong group of young and talented players from the Philadelphia area to a accompany a coach in Jim Curtin who himself is a Philadelphia-area native. Last season it was Brenden Aaronson and Mark McKenzie who helped the Union to the league’s best record.

In the wake selling Aaronson and McKenzie, the local pipeline via the club’s impressive academy remains very strong.

Quinn Sullivan, 17, is one such player who has shown a lot of promise so far this year at a very young age. After progressing through the Union’s academy and then signing a homegrown deal last fall, Sullivan has been playing an increasing role with the Union’s first team in 2021.

What makes his story even more special: He’s an example of a kid joining his local club to pursue a pro career but also hails from one of the city’s great soccer families.

Anyone involved in soccer in the Philadelphia area likely either knows or has been connected to the Sullivan family in some degree. Quinn’s grandfather, Larry Sullivan, was standout player at Temple under head coach Walter Bahr, the Hall of Famer and veteran of the 1950 World Cup team. Larry Sullivan played professionally with the Philadelphia Spartans and then went onto coach Villanova from 1991-2007.

Both of Quinn’s parents played soccer at a high level. His father, Brendan, played professionally with the Long Island Roughriders after college ball at the University of Pennsylvania. His mother, Heike, captained the Penn’s women's team. His cousin, Chris Albright, played for the USA at the 2000 Olympics, was on the 2006 United States World Cup team, and played MLS ball for more than a decade.

The ties between the family and the Union are strong. After Brendan retired from playing, he joined his father’s staff at Villanova, where they both coached current Curtin. And Brendan now teaches at the YSC Academy, the school that serves Union's academy players. Albright is the club’s technical director.

"When you talk about the Sullivan last name, it's a family that is a big-time soccer family in the city of Philadelphia," Curtin said. "There is nothing more Philly than the Bridesburg area. It's blue-collar, it's tough. That is where Quinn is from. For him to grow up in his hometown, to get better each and every year, to be pushed by his brothers, to be pushed by his father, to be pushed by his [grandfather] who was my coach at Villanova, it feels surreal to be taking pictures with him holding up the Sullivan name.

"It's kind of a perfect fit with the Philadelphia Union."

All this wouldn’t make for a good story, however, if Sullivan wasn’t a good player. Thus far Sullivan has impressed beyond expectations playing a variety of attacking midfield positions.

"He can read the game and he can solve problems on the field on his own," Curtin said. "He can adapt to any situation. I've seen him play multiple positions and thrive at all of them."

He has made 16 appearances in total and in his first start on June 27 against the Chicago Fire, he scored a remarkable bicycle kick goal to equalize the game at 1-1.

“It's been a fairly smooth transition,” Sullivan told Soccer America about growing into the first team. “A huge shout out to the academy, because it really prepared me so well and just the overall buildup over the years from the academy to the second team to then the first team -- that made the transition not so difficult. It all starts with the culture that the coaches built in the academy and the idea of how we want to play.

“Also, just the overall competition that we have here, there's a lot of great players and a lot of guys that want to make it to where I have made it so far, and that competition just fuels the mentality to keep going and to keep fighting.”

This Saturday, the Union will host Atlanta United in what should be one of this weekend’s best MLS matchups. It pits two teams who have struggled this year -- Atlanta United with coaching changes and Philadelphia rebuilding with the sales of McKenzie and Aaronson -- but are now on the right track. Both teams occupy the East’s final two playoff spots.

It should be a busy time for Sullivan on many fronts. In addition to an expanding role within the Union, there is the international component as well. Sullivan is expected to be part of the upcoming U-20 team and that team now has the responsibility of qualifying for both the 2023 U-20 World Cup and the 2024 Olympics – and ending the Olympic qualifying drought dating back to 2008.

That team is likely to begin assembling in November and thus far the 2003 and 2004-born players are making a big impression in MLS, including Ricardo Pepi, Caden Clark, Cade Cowell, Kevin Paredes, and Justin Che. Three Union players also likely in the mix with Sullivan, Paxten Aaronson and Jack McGlynn.

“We all want to play for our national team and represent the U.S. whether it's right now at the U-20s or the senior national team,” Sullivan said. “I want to make happen.”

Sullivan pointed out that last season’s sales of Aaronson and McKenzie along with their promotion to the full U.S. national team provided a huge morale booster among the club’s new core of young players and the players still in the academy.

“Everyone at the academy that's pursuing it, double sessions and really putting in the work and grinding it out -- we all have the dream to get over to Europe,” Sullivan said. “When you see guys like that going over and doing it at the top league, it gives you a definite gives you confidence boost of -- I can do this.”

The impact and promise Quinn Sullivan has shown, along with his two younger brothers also impressing at youth levels, that the Sullivan family isn't just a relic of an earlier era of Philadelphia soccer, but one that remains strong and vibrant with its best days ahead.

"It's been really helpful in my career so far," Sullivan said of his family. "My grandfather and my dad both have a great idea of the game. But when they watch me play, they can recognize plays and they can depict them with their words really well. After the games we would go over play by play before we had film. That really set me apart at a very young age – a play-by- play look to see where I can improve.

“My soccer family is obviously huge. Let's just say family functions were always super fun if there was a soccer ball around."