A Goal in a Thousand

One-zero. 1-0. Not my favorite scoreline. If a soccer game’s going to be decided by a single goal, I’d rather see the score at 3-2, or 4-3. One goal in 90 minutes is simply not enough. The leap-out-of-your seat moments just aren’t there. That’s my feeling, and a pretty strong one it is.

Lively goalmouth action, with near-thing goalkeeper saves, may make up for the lack of goals. But that’s not what we get these days. The modern coach knows how to protect a 1-0 lead. His team will know how to defend the life out of the game. And to bore the hell out of most watchers.

I had been watching Manchester City play Chelsea. The European champions against the English champions. It finished 1-0, ManCity scoring on a deflected shot. ManCity was brilliant said one of the panel pundits. Really? Ho-hum. Ho-humissimo in fact.

But ... surely there has to be an exception now and then? There does. An extraordinary exception arrived quickly with the Southampton-Wolves game last Sunday. Not the greatest game in the world. And it did finish 1-0.

But that lone goal, scored after an hour of play, was a goal in a thousand, a goal that all Wolves fans - and, surely, a host of others - had been waiting so anxiously for. Waiting 10 months, since last November’s Arsenal-Wolves game. That was when Wolves’ Mexican striker Raul Jimenez clashed heads with Arsenal’s David Luiz. A frightening moment -- the word “sickening” was widely used in the English press. Jimenez came off worse, was eventually stretchered off the field and rushed to hospital. His skull was fractured. He could recall nothing of the incident. 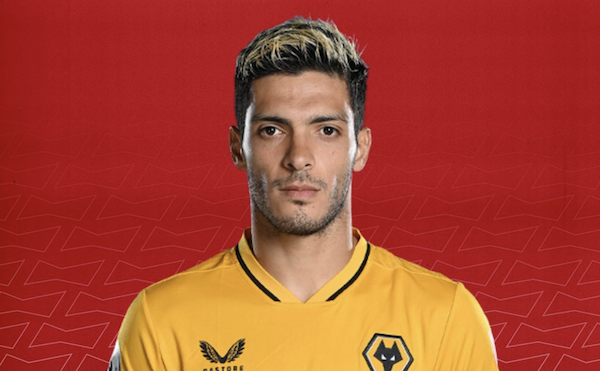 And so the long wait, while Jimenez struggled with his recovery. Lurking somewhere in his mind must have been the treacherous thought that he might not recover ... that he might never play again.

Jimenez, at age 29, fought on. He says he never thought of quitting. He also says that the doctors told him that he was very lucky to have survived the injury. Jimenez resumed his career with Wolves in May of this year. Wearing a soft headband -- a psychological aid I suppose, but surely nothing that would prevent another injury.

Since then, he had played five first team games, but had not scored. I have seen all those games, on television, and have tried - as far as the TV cameras will allow - to track what Jimenez is up to. It has worried me. Jimenez was really a marginal figure in all five games. He seemed to prefer being on the flanks, rather than in central positions. I found him quite often falling back into midfield. The upshot of all that was Jimenez did not score a goal, didn’t really come close to scoring.

I’ll confess, it did, to me, look like Jimenez was dodging the more competitive central area. What do you do with an unbidden thought like that? Such thoughts do not go away. This one would not. It could be banished only by Jimenez. A Jimenez goal.

I’m not the praying sort, but how I wished for that goal. Me and tens of thousands of others. And Raul.

The goal duly arrived last Sunday in the Southampton-Wolves game. A lovely bright, sunny afternoon on England’s south coast. The goal - this beautiful, wonderfully invigorating goal - began ugly. Just about as ugly as you can get within the rules. Wolves goalkeeper Jose Sa had the ball in his hands and decided, as goalkeepers will, to simply wallop it downfield. A high, long, punt. Prodigiously long, this one. It sailed over everyone’s head, coming to earth nearly 20 yards into the Southampton half. Jimenez was up there, closely marked by Jan Bednarek. Both chased the ball as it bounced toward the Southampton penalty area.

Jimenez, outpacing Bednarek and using his body to fend off the physical challenge, took control of the ball and cut inside, along the edge of penalty area. Another Southampton defender, Mohammed Salisu, sensing trouble, came across to tackle Jimenez. Jimenez left him on the ground. Bednarek returned to the fray and attempted a desperate sliding tackle - he too was left on the ground as Jimenez advanced a yard or two until he was almost standing on the penalty spot. There he calmly set up the ball for a low right-footed shot past goalkeeper Alex McCarthy.

As fortune would have it, this goalmouth action - it took only about 6 magical seconds - happened where all the Wolves fans were gathered. Jimenez raced toward them as they rose to let loose as heartfelt a roar as any soccer stadium has ever heard. Teammate Daniel Podence, his face one huge smile was clinging to Jimenez, as other players arrived at a gallop. Way down the other end of the field, Wolves captain Conor Coady, his face creased with what looked like agony, but was really high-tension joy, was leaping into the arms of goalkeeper Sa. 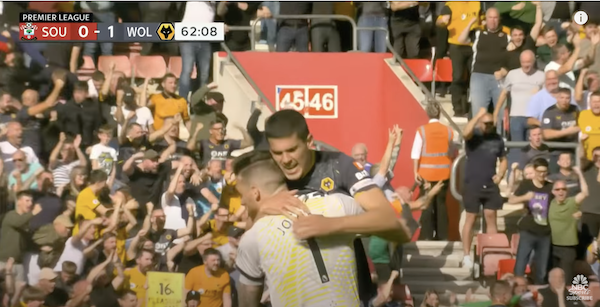 Funny thing -- despite all those laughing and cheering Wolves fans, that sea of raised arms and yellow shirts (sorry Wolves fans, I know that should be “old gold shirts”) Jimenez wasn’t smiling. He looked almost solemn as he took off his headband. But quickly replaced it. A subtle warning that his ordeal is not over yet. Challenging for head balls was a big part of Jimenez’s game - will it still be so? There has been very little of that in his return so far. I found myself wondering - is it needed? The emotional, cathartic goal he had just scored came largely as a result of his brilliant play with the ball on the ground.

Even watching two-dimensionally on television, I found the experience incredibly moving. And at the same time, thoroughly disturbing. The horrible injury that kept Jimenez sidelined for six months - should that have been allowed to happen? Can it possibly be right to dismiss such a life-threatening incident as “an accident, all part of the game”?

A question that soccer has never allowed itself to acknowledge. Which means that the possibility of another serious head injury is not just a nightmare ... it is a nightmare waiting to become terrible reality.