Hollywood's Jim Piddock on helping save Crystal Palace, goalkeeping on Broadway, and the charm of Ted Lasso 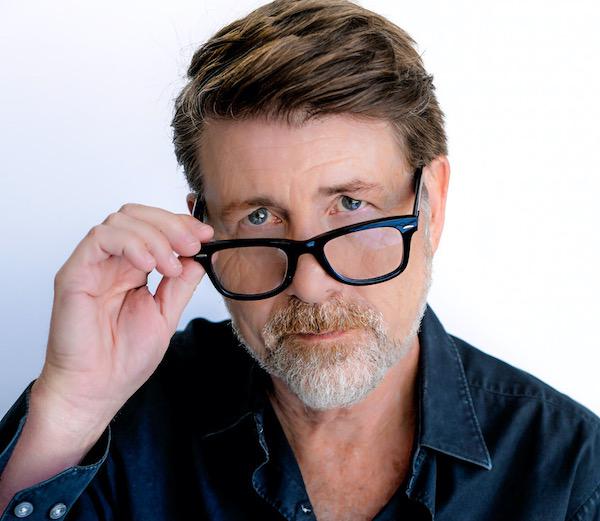 One of Hollywood’s most prolific  creators, the actor/writer/producer Jim Piddock grew up in England aiming to be a professional soccer player. The realization during his mid-teens that sports was unlikely to provide a vocation coincided with precocious success on the stage. While continuing to play soccer for fun, he became the youngest director in English theater at age 23, before moving to the USA in 1981.

His 100-plus acting filmography list includes movies Lethal Weapon 2, Best in Show and Mascots, which he co-wrote and produced, and sitcoms Modern Family, Friends and Mad About You.

Piddock’s affinity for soccer is well-known in his native England, having helped save his favorite childhood club from bankruptcy in 1999 by founding the Crystal Palace Supporters' Trust. It also helped pave his way to Hollywood via Broadway. Shortly after Piddock arrived in the USA at age 25 to direct plays and teach classes in Berkeley, California, he was offered the perfect role for a soccer savvy actor.

SOCCER AMERICA: I knew of your Crystal Palace support, but as an Oakland resident, it jumped out of your bio that you’re an A’s fan. Why’s that?

JIM PIDDOCK: My first year in the country was in Berkeley, so the first team I went to see were the A’s.

SA: How did you end up in Berkeley?

JIM PIDDOCK: I was offered a job directing a couple of shows and teaching some improvisational classes and other classes for a few months. And then I ended up a doing a one-man show. … That show basically launched my whole career.

SA: The one-man show was ''The Boy's Own Story,'' by Peter Flannery, in which you portrayed a goalkeeper.

JIM PIDDOCK: The Julian Theater had a play fall out at short notice at the beginning of the season. They asked how quickly can you put it together? It was cheap because it was a one-man show. I hired a director, Richard Seyd, who was great.

We had a full house the first night because a lot of people I’d been directing or teaching at the drama school wanted to see one of their teachers fall flat on his face. So that was good. The second night we had four people in the audience.

JIM PIDDOCK: Four people. They all sat in the front row. An hour and a half of nonstop action and talking, a very dynamic, physical show. It was bizarre doing it for four people. But they were lovely and gave me a standing ovation. The next day the reviews came out. From then on, it was sold out and they had to extend the run two times. 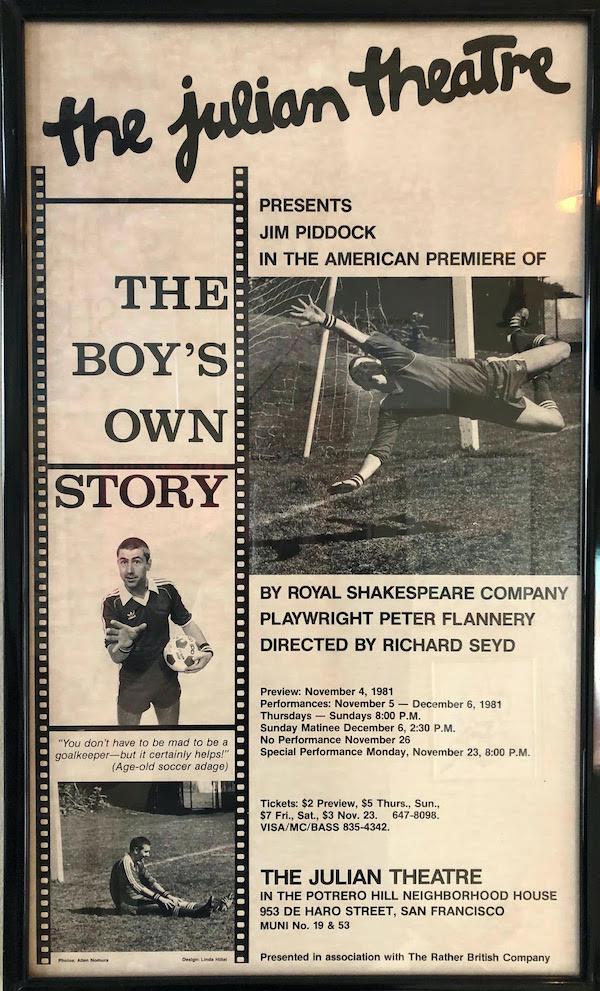 SA: I was surprised that in 1981 a soccer-themed play was a hit – and went from San Francisco to Broadway …

JIM PIDDOCK: Very surprising, which is why no one wanted to do it at first. But it was much more than about soccer. I'm a great believer that soccer movies, TV shows or whatever only work if they're not about soccer. That’s just what you hang your hat on. Chariots of Fire is not really about running. The King’s Speech isn’t really about a man who stutters. It’s just your premise, and then it’s about the human condition.

SA: It was so successful that it brought you to Broadway, where you were then hired for other plays (appearing with George C. Scott, Nathan Lane and Peter Falk et al.). What led you to Hollywood?

SA: And you started a soccer team?

JIM PIDDOCK: At first, I played for the Exiles. It was run by Rod Stewart and Hamish Stuart of the Average White Band. We were a bunch of English reprobates. Then I started my own team, called the Wanderers. I ran that for at least five years. It was British-oriented but we had quite cross-section of nationalities, less British-centric.

Fred Willard and Jim Piddock judging hounds in the movie Best in Show, directed by Christopher Guest, with whom Piddock collaborated on the HBO series Family Tree.

SA: How did you become a Crystal Palace fan?

JIM PIDDOCK: It was them Millwall or Charlton. My father wasn’t really a football fan and he hated crowds. But he took me to a Crystal Palace-Charlton game. An FA Cup game in 1968 when I was 12. After that, I went to games on my own and have been a Crystal Palace fan ever since.

SA: Fast forward to 1999 and Crystal Palace was about to go into bankruptcy. You started a Supporters' Trust that has now become the model for such situations …

JIM PIDDOCK: I started it with couple other guys. Richard House is a lawyer who figured it out, and Paul Newman, who was the sports editor of the Independent, was very involved. It was a way to raise money with a structure that was easy to set up quickly, and time was not on our side. I was the front man, the spokesman who gave speeches on the pitch, and appealed for money. ... Eventually, Steve Parish and Steve Browett turned the club around and made it an incredible successful sustaining Premier League team.

JIM PIDDOCK: The Americans came in later. The four people who bought it in 2010 were all Palace fans who had done very well professionally.

SA: The Americans Josh Harris and David Blitzer invested in 2015, and John Textor (fuboTV CEO, "Hollywood’s Virtual Reality Guru,") came aboard this year. More and more American businessmen are buying into European clubs and not always welcomed. But it's good for Crystal Palace?

JIM PIDDOCK: Yeah. John is great. He's done community-based soccer programs in Florida. He’s perfect for a community-based club in England. He’s deeply passionate. He watched every U-23 game last year online. John loved the idea of the underdog and Palace was perfect for him. ... Three major American investors, and there are quite a lot of small investors who have half, or 1 or 2 percent of the club. One whose nephew is a writer, which is why the show Ted Lasso ended up being filmed at Crystal Palace. 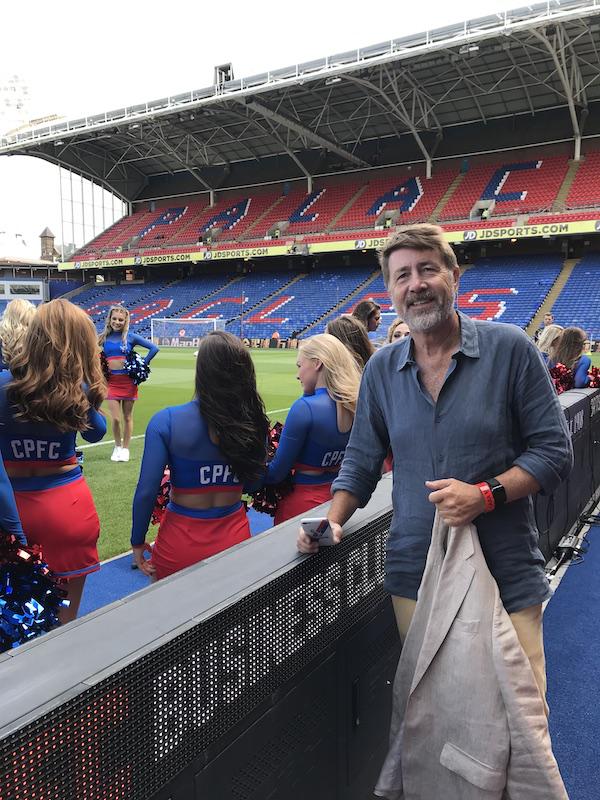 JIM PIDDOCK: I think it’s the best comedy on television. It’s extremely difficult to do fiction football shows or films and I think they absolutely nailed it. They took the character from the promos and very cleverly made him three-dimensional. Even though he really didn't know much about soccer, he was brilliant at human psychology, how get into people's heads, which is a lovely idea. It was a pretty smart way to round it out. He became a lovely character.

SA: How does your partner, Ann Cusack, feel about your passion for soccer?

JIM PIDDOCK: She’s really on board. We went to every Crystal Palace preseason game this year and she become quite a fan. She loves the whole drama, the almost Shakespearean soap opera of the Premier League. She loves to hear about the psychology of the game. At one game, she ended up having a long chat with Eberechi Eze, who was recovering from injury. They started talking about his injury and our mental strength to come back and achieve, the way you deal with adversity.

She told him, “You play with a smile on your face. There are not many players who have that. You were born to be a soccer star. That joy and that energy is radiant the same way it is with a great performer.” I can’t speak highly enough of him. He’s one of the most astute, mature, radiant 23-year-olds I’ve ever met in my life.

JIM PIDDOCK: I went to the first Galaxy game [in 1996] and went to about half a dozen games a season. Then I got involved with LAFC when it was getting off the ground and was attracted by the community feel around the club. Then after 10 games, they said they under-priced the seats and jacked the season-ticket prices up by 40%. I traveled to their first ever game in Seattle. I was really involved on the ground level three years before they even started. I thought it was such massive mistake to raise the prices. I said I'm not renewing on principle even though I could afford it. I objected to it. I think they burned bridges with a lot of people. It took my passion for them away. I still watch their games on TV but haven't been back to the stadium since the pandemic. I really liked the team. They had a great first season. I think Bob Bradley's great and they have some great players, but on principle I think it's so wrong to raise ticket prices before they're even halfway through their first season.

SA: In Mascots, you play Owen Golly Sr., the former mascot of the Willingham Rovers and father of their current Sid the Hedgehog, who’s in the competition. How often do you incorporate soccer in your work?

JIM PIDDOCK: Not much, but when write I sometimes name characters after Crystal Palace players. The first film I made I named a character Nigel Martyn. In the soccer scene in Mascots, the names on the back of the players' jerseys are names of Palace players.

SA: I heard you're coming out with a book in March. Will it include soccer?

JIM PIDDOCK: It's called “Getting Caught With My Pants Down and Other Tales from a Life in Hollywood." For a showbiz memoir, it will include quite a lot of soccer stories.

Jim Piddock’s Favorite Soccer Books
1. Fever Pitch by Nick Hornby
2. The Miracle of Castel di Sangro: A Tale of Passion and Folly in the Heart of Italy by Joe McGinniss
3. How to be a Footballer by Peter Crouch
4. Cherries in the Red: How One Football Fan Saved His Club and Became Its Chairman by Trevor Watkins
5. My Story: From Foster Home to Footballer by Mark Bright
6. The Damned United by David Peace