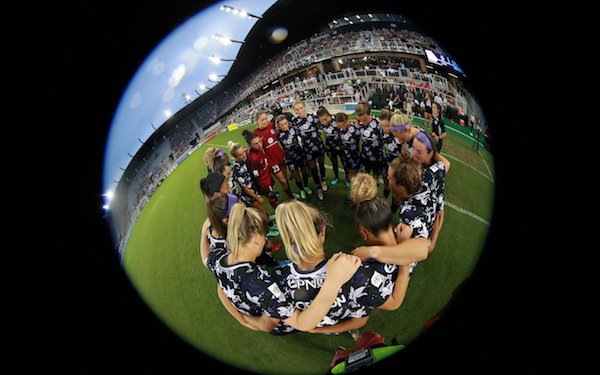 U.S. Soccer formed the National Women's Soccer League in 2013 with the notion that if it didn't, women's pro soccer would probably die.

In light of the developments of recent months, a strong case could be made that it made a mistake. Just because you want something not to happen might not always be reason enough.

U.S. Soccer had a lot of good intentions in launching the league. It also had its own self-interest. Its women's national team players would have a league of their own in which to play.

It was a great idea with its own conflicts that through the years pitted the interests of the national team players contracted by the federation and represented by their players association against the NWSL's rank and file, who didn't get union representation until 2018 and still don't have their own CBA.

U.S. Soccer's backing of the NWSL was fine and good, but it needed a reason for being on its own, and it needed owners who believed in that mission and committed the money to support it. Since the NWSL's launch in 2013, its owners have committed a fraction of what was needed. At every turn, the NWSL has suffered because of the lack of funding.

After nine years, the salaries of some players remain so poor that the NWSL Players Association started its #NoMoreSideHustles campaign to highlight what players who make less than a living wage from their soccer jobs do on the side. At the top end, salaries haven't increased fast enough to prevent the flight of most foreign stars it once attracted to clubs in Europe.

Coaching salaries aren't high enough to attract a wider pool of applicants who might have been better than some of the coaches NWSL clubs ended up with. His NWSL salary wasn't a problem for Paul Riley, who made a fortune off coaching in youth soccer and whose Long Island mansion -- dubbed "the Awixa Castle" on Zillow -- is on the market for $1,949,999. If he had the money in the bank his NWSL coaching colleagues probably did, I don't think he'd have picked up the bar tabs of players like he admitted to The Athletic he did.

But the lack of funding runs deeper than that. I've had people joke that the NWSL offices, which were once located at U.S. Soccer House, fit in a closet. (There are a lot of closets at U.S. Soccer House.) The league office was never properly funded -- the NWSL didn't have a commissioner for three years before Lisa Baird, who stepped down on Friday, was hired in March 2020 -- nor were club front offices.

“The thing that is so hard for these women is they are fighting tooth and nail just to make a living, and a lot of these clubs are not funded in the way men’s organizations are funded,” Tonya Antonucci, who served as WPS's first commissioner, told Kevin Draper of the New York Times on Friday. “You don’t have the robust H.R. departments and systems and accountability, but it should be there.”

There are a lot of yucky people out there, but some of them might have not been allowed in the NWSL -- or allowed to continue to work in the league -- if the proper systems were in place.

Investigations by U.S. Soccer and FIFA will hopefully determine how the NWSL and its clubs failed their players and who were responsible. They may even recommend how to prevent these abuses from happening again. But they won't pay for what needs to be done.

Women's pro soccer was at the crossroads in 2012 and 2013 like men's pro soccer was in the United States after the 1994 World Cup. At least MLS got the funding to launch in 1996. (Unless you were around in late 1994, you won't realize it was no sure thing that MLS would get off the ground.)

More to the point, the NWSL today is like MLS in 2001, facing its moment of reckoning.

MLS was down to 10 clubs and in danger of folding. The turning point came when MLS commissioner Don Garber and deputy Mark Abbott flew to Colorado to meet with owners Phil Anschutz, Lamar Hunt and Robert Kraft at Anschutz's ranch to discuss their options, which included folding MLS. Anschutz, Hunt and Kraft agreed to fund the entire league, in effect writing a blank check, but Garber and Abbott needed to write a business plan and the league needed to drop to 10 teams, folding the Miami Fusion and Tampa Bay Mutiny.

Women's pro soccer needs its Anschutz ranch moment. It needs a group of owners to commit to writing a blank check and it needs a plan. MLS shut down two teams. The NWSL will likely have to fold -- its name is too damaged -- and a new league will have to be be formed.

The good news is that the landscape for women's pro soccer is a lot stronger than it was a decade ago. There are more investors, more commercial sponsors, more media patterns. Things aren't perfect. The attendance in many NWSL markets has been frankly disappointing this season relative to how it has come back in some MLS, and even USL, markets on the men's soccer side. The concept of women's pro soccer is solid, though.

Will U.S. Soccer have been proved right in keeping women's pro soccer alive and launching the NWSL? Women's pro soccer might still succeed, but it needs the proper backing and funding, to the tune of a lot, lot more than is being offered now. And it will have been on the pain and suffering of many young women chasing their dreams.