So much to dislike about soccer: a critic writes

Ambrose Bierce  defined a critic as "a person who boasts himself hard to please because nobody tries to please him." That is a good description of myself on the sofa this past Saturday evening, beer glass half empty, and ready to enjoy a few hours of sport after a hard day's refereeing. Except that instead of appreciating great play, fine goals and admirable sportsmanship, I only found a whole list of things to dislike.


I watched a mixture of highlight broadcasts and live games. And although I swooned and cooed at the beauty of Luis Suarez's goal that put Atletico Madrid 2-0 up against the now serially desperate Barcelona, I mainly found myself aggrieved at pernicious trends and recurring incidents that have entrenched themselves in the game.

1. Joy-killing VAR. I know, we've discussed this many times before, but that doesn't make it any easier to tolerate. In the 66th minute of the German second division game between FC Nürnberg and Hannover 96, Nürnberg's midfielder Tom Krauss finished off a swift counterattack to put his team 1-0 up. He celebrated with his team and the entire rocking stadium. Everyone jogged back to the center circle, the TV producer clocked the score at 1-0, and then the Video Assistant Referee, that invisible, pernickety annihilator of festive spontaneity, decreed that during the buildup -- unseen by the naked eye of the assistant referee, or anyone else -- Krauss's teammate Nikola Dovedan had apparently been offside by the shaving of a toenail. Indirect free-kick. Euphoria flattened. The game ended 0-0.

How can a sport -- where goals are in any case such a rare commodity -- do this to itself, again and again? Dovedan's toenail was not seeking an unfair advantage. The referee's assistant did not make a clear and obvious error. Props to the English Premier League, which this season has stopped cancelling goals like this. The Bundesliga has to follow suit and cease this infuriating, entertainment-destroying interference.

2. Unhealthy adulation. German state TV was showing highlights of Manchester United-Everton. The focus was on Cristiano Ronaldo, from start to finish. What did the goal-notching legend do this week? Score a hat-trick? Beat seven players and fire in from 30 yards? No, he was on the bench. That was the story. We were shown his reaction when United scored, though. We got to see him coming on and missing a chance. The whole spotlight was on CR7, the game itself was apparently just a side-show. But soccer's a team sport, right? Good luck passing that message on to young players when broadcasters are besotted with the brand and prone to slavishly deify the superstar.

3. The cult of the coach. During the above-mentioned Atletico-Barcelona game in LaLiga, the cameras spent much of their time on the coaches. There were two separate five-act plays with the following titles: The Last Days of Ronald Koeman and The Eternal Dance of Diego Simeone The broadcasters were keen to show us Koeman on the phone up in a private box, where he was serving a touchline suspension. Was he selling his shares in the club? Making vacation plans to follow his inevitable upcoming dismissal? Ordering out for tacos? Meanwhile, down on the touchline, Simeone had the stage all to himself. Shouting, gesticulating, motivating, cajoling, despairing, ululating and grooving to the beat of the crowd, the Argentine's performance was impressive and highly expressive, as always. Only, why do we have to see it? What does this exaggerated showmanship and pumped-up hysteria have to do with the game? Nowadays, a cynic might counter, absolutely everything. How I miss those passive but observant gurus of yore who sat still and watched the action with care, taking notes and not harassing the match officials. Which brings me on to ...

4. Remonstrative Players. Every decision, every time -- there are certain teams and players, and they are absolutely in the majority, who see themselves obligated to protest the award of each and every foul and throw-in. Like it's in their contracts and they'll be transferred to the Belarussian third division if they don't let the referee know their alternative opinion, at length and with emotion -- that facile alibi for moronic conduct. Please just shut up, now and forever, and get on with the game. It doesn't mean you're a 'competitor,' it just means you're a jerk. And referees, show them a card for their troubles. You're allowed to do that -- it says so expressly in Law 12. 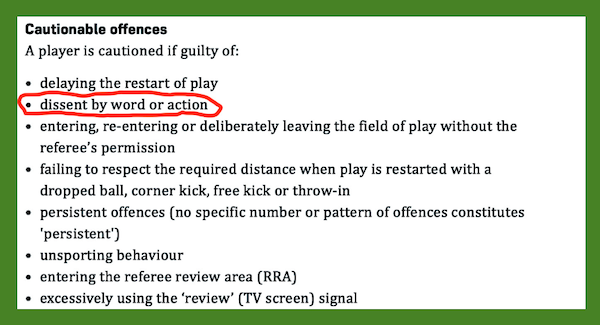 5. Pulling, holding and shoving at free kicks and corner kicks. See point 4. Though it might not be beyond the imagination of the game's millions of coaches to come up with some alternatives that don't involve just crowding the six-yard box, where a promising dead-ball position results in nothing, yet again.

6. Away kits. In the Bundesliga, TSG Hoffenheim was wearing an all-pinkish creation for their visit to VfB Stuttgart. Their 3-1 defeat was fully deserved on aesthetic grounds alone. Barcelona had a sort of pastel purple on, which from a distance looked more like grey. These uniforms have no connection with their clubs, they're just dressing up for a night at the theater with Diego Simeone, creating ugly and superfluous second and third shirts to rip off gullible fans. One positive uniform -- Hannover wore all white with green socks, a nod to the actual club colors. Kit design is yet another realm of soccer infiltrated by cash-seeking kidders, con-artists and charlatans. Don't buy it. But don't beg for it either ...

7. People in the crowd with signs begging for a player’s shirt. Look, I know this is going to sound like the height of curmudgeonly complaints, but seriously, do these people have no dignity? Having paid God knows how much for a ticket to get in, you are now publicly begging in front of a potential audience of millions? What makes you think that you deserve a player's shirt any more than the other 60,000 people in the stadium? Get down to the team's mega-store and fork out a hundred bucks like everyone else. The club should hawk the players' shirts on line and give the money to a decent cause, like The Society for Moaning Saturday Night Sofa Fans.

My actual list was much longer, but that's enough for one column. I'd hate to come across as someone who's difficult to please.

germany, referees
16 comments about "So much to dislike about soccer: a critic writes".
Read more comments >
Next story loading