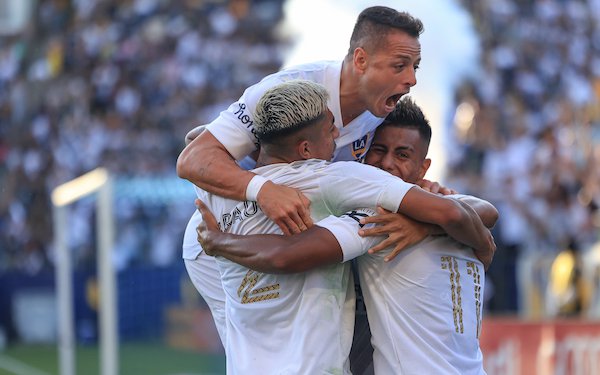 The LA Galaxy see a lot of positives from their play in recent weeks, no matter the results. They've created enough chances to win games, enough to have deserved three points, enough to stoke the belief they're heading in the right direction, no matter those pesky results.

We saw it again in Sunday's final El Trafico showdown of the season. The Galaxy looked pretty good in an intense and often chippy first half, scored on a terrific sequence, went to the break on even terms with crosstown rival Los Angeles FC, then failed to complete the mission in a last 45 that lacked, on both sides, the intensity of that first half.

The 1-1 draw, not an unreasonable outcome, extended LA's winless streak to nine games,  narrowed their hold on one of the seven Western Conference playoff berths, and left them frustrated and confident in nearly equal measures. If they could just put the ball in the net and cease the defensive miscues that have haunted them much of the season.

“It's more about scoring more goals, not conceding much goals, and also belief,” attacking midfielder Victor Vazquez said afterward. “We don't have the luck in our side now. That's all.”

Fortune has not smiled on the Galaxy (11-11-6) since their last victory, a 1-0 decision Aug. 14 at Minnesota United. Before then, even. That win marked the first time in Vanney's tenure that LA hadn't scored more than one goal in three successive matches. Since then, they've scored more than once only once, in the wild 3-3 draw at LAFC at the end of August. Trafico games are perfect for producing outliers.

The Galaxy aren't scoring the goals they should be tucking away, the goals they were getting as they raced to a 7-3 start behind Javier “Chicharito” Hernandez's 10 goals. A calf injury deprived him of the next 12 games, and they've fallen about a half-goal per game since. And they've scored just four in the six games since that 3-3 tie, with Chicharito, author of two of those goals, on the field for the past five matches.

“The group is working hard, they believe in themselves and they believe in the direction and in the fight that they're putting in,” head coach Greg Vanney said. “We're just looking for a break ... any break right now just to try to get some momentum. We're looking to connect a little bit on any situation that could get it to fall in our favor a little bit.”

Those moments aren't arriving. They were the better side in their previous two games, a 2-0 loss at Austin FC and 2-1 stoppage-time defeat at Real Salt Lake, should have beaten RSL handily, but hitting the net is too often beyond them. The chances are there, but the last pass isn't, or the finish isn't good enough.

How much is luck and how much is merely failure? The Galaxy put only one shot on goal Sunday, Samuel Grandsir's empty-net finish after angling past goalkeeper Jamal Blackman from Vazquez's through ball in the 19th minute. It completed a gorgeous sequence, with Julian Araujo lofting a ball from the right wing to Vazquez at the edge of the attacking third. A quick give-and-go with Hernandez settled the ball, and Vazquez's feed was perfect, just beyond Mamadou Fall's slide and in ideal space for Grandsir to put away. 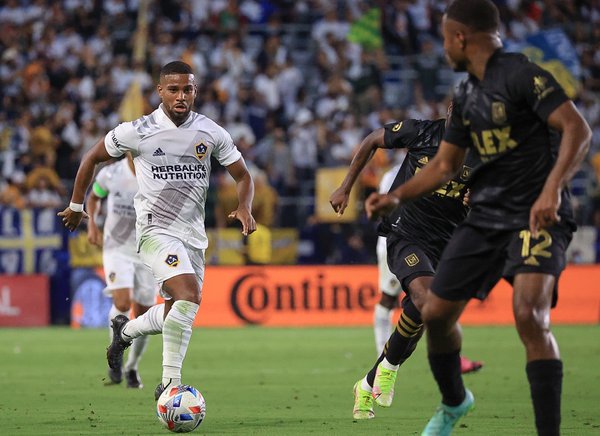 That erased LAFC's early lead, on Fall's sharp header -- while surrounded by defenders -- from an Eduard Atuesta corner kick. That's another issue. The Galaxy scored first in 13 of their first 19 games but have done so just once in the nine since, Dejan Jovelic's opener in that 3-3 game.

They've conceded too many soft goals, too many goals at the most inopportune moments. The details get in the way, and too often there's confusion over who should do what or what should be done. That happens in attack, too. Some of it ought to be expected. Vanney is rebuilding a humbled giant, and his work was never going to be completed in half a season, nor in a full season, and there remains so much to do.

The backline issues haven't been solved -- LA's biggest need, since Jelle Van Damme became a red-card magnet and then headed home to Belgium four years ago, has been a dominant center back, not necessarily the easiest thing to land -- the connections up top remain a work in progress. Midfield stars Jonathan Dos Santos and Sebastian Lletget haven't been in their best form, Grandsir and fellow Frenchman Kevin Cabral show flashes but are inconsistent, and Hernandez's absence those a dozen games did the Galaxy no favors.

What clicked before Hernandez's injury hasn't clicked since, not in the decisive moments. If the game were judged by aesthetics rather than scores, the Galaxy are doing OK. Not great, but not bad. Alas, results matter.

Balancing a good performance and an unsatisfactory result, Vanney said last week, makes for “an interesting trick, because of the time of year and the emotions that come with results at this time of year.”

“If these performances [against Austin and Real Salt Lake] came in the first five or six games of the season, we would take a lot of positives out these thing and know that we're building towards a bigger picture in a season,” he said. “But right now, sometimes it's just about the result, it doesn't matter how you get the result. But having said that, we're trying to stay focused in the fact that we're trying to find the best form, the best version of us.”

Vanney, hired in December, has remade LA's roster. They've brought in 16 players, half of them from Europe, and 10 of them playing significant roles. Those unfamiliar with Major League Soccer must adjust to its idiosyncrasies -- the humid heat, the travel, the altitude in Denver and Salt Lake City, the competitive balance, the unique rhythms a playoff chase produces -- and some acclimate more easily than others.

“[It's a learning curve] with any new group,” Vanney said after Sunday's game. “And especially as many new players as we have in this team who haven't played in these sort of critical crunch moments at the end of an MLS season, where every game feels like it is even more important, it's bigger, where the eyes are on the table.

Vanney likes what he sees, mostly, but it's not good enough.

“I feel like our timing, our final pass, our final decision, our final run, those things are still a little bit off from where we'd like to be,” he said. “I thought we were more efficient around the goal in the first part if the year. I don't think we were necessarily creating more chances in the first half of the season. I think we were just finishing more of the chances we were creating.

“I think we're in the box more, I think we are controlling games in the opposition's half a little bit more than we were even in the beginning of the year. [Our early efficiency] around the goal equated to goals and us being able to get results and get on top of games.”

The draw followed the unveiling of a Landon Donovan statue, a few yards north of David Beckham's, at the entrance of Dignity Health Sports Park. Donovan was inducted into the Galaxy's Ring of Honor at halftime. He concluded his remarks at both ceremonies with a heartfelt “Beat LAFC!” 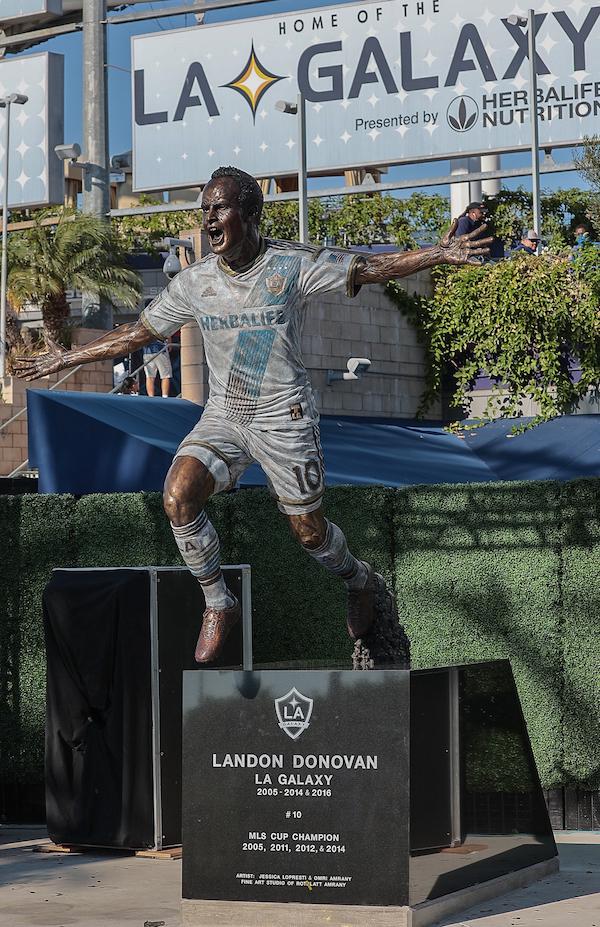 The Galaxy, who won the season series for the third time in four years, nearly did so -- Nick De Puy and Lletget put second-half headers off the frame and Hernandez put a good chance wide of the target -- but LAFC (9-12-7) had as much reason to be displeased. Bob Bradley's side was sharper in and around the box, tested goalkeeper Jonathan Bond several times, including a Francisco Ginella drive the Englishman parried off his crossbar moments after De Puy's miss.

The loss ended a three-game losing streak for LAFC, which sits in ninth place in the West, five points behind the Galaxy and four below the playoff line, with seventh-place Minnesota United holding a game in hand in the Angelenos. Bradley called it “for sure, not our best night.”