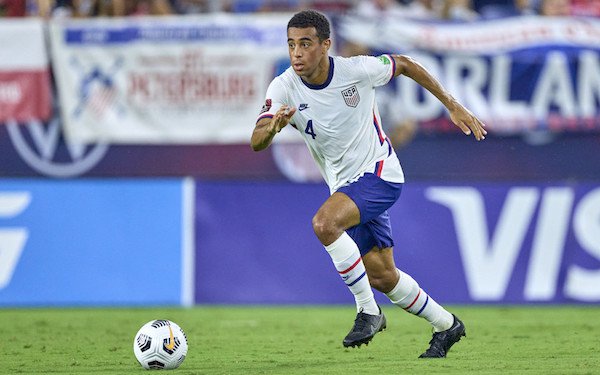 Before the first World Cup 2022 qualifying in September, Tyler Adams admits he and others on the U.S. national team got a little ahead of themselves.

"I mean, I remember, even myself, I previously said, ‘Let's get nine points in the window.’"

There were two problems with that.

The first was that they needed to focus on one game at a time, each one unique in its own ways, with a different squad put out on the field to face a different opponent.

The second thing was it looked silly when the USA opened with two points in two games against El Salvador and Canada and for a while looked like it might not even get a point in the third game against Honduras.

Adams was speaking from Austin, where the USA is preparing for its first game of the October window against Jamaica. This time, he says the approach is different.

"Let's focus on each game and what we need to do in order to win each game," he added. "And then I think that's going to set us up for the best success.”

Adams has played in the UEFA Champions League with RB Leipzig for the last three years, reaching the semifinals in 2020, but he was one of 16 players to play in World Cup qualifying for the first time, many of them just weeks into their seasons with their European seasons.

"We're a little bit into our season now," he said, "so I think the fitness is there, which also helps.”

'You can tell that the group is focused With the first game of the three-game window moved up to Thursday, most players coming from Europe don't begin arriving in camp until Sunday or Monday, making it a quick turnaround. In his most recent U.S. Soccer podcast to review the September window, U.S. coach Gregg Berhalter said everyone -- players and staff -- were too slow to get focused, and it showed in a 0-0 tie at El Salvador.

"I think that coming into last camp," said Adams, "maybe we were just a little bit naive and we didn't really know what to expect, and that's why we had to use those first three games as a learning process. And now you can already see, it's been one training, but at the end of the day, you can tell that the group is focused."

There is a lot of turnover in the U.S. squad. Part of it is due to injuries with stars Christian Pulisic and Gio Reyna both still out with injuries suffered in the September window.

"Missing players like Gio and Christian obviously affects the team," Adams said. "They're creative players, they're dynamic players, but when you look at the squad and the depth of the squad, we've always had that next-man-up mentality."

'We're going to need everyone this camp' For the previous three games, just five midfielders were called in. This time, teenagers Yunus Musah and Gianluca Busio and Dutch-based midfielder Luca de la Torre have been called in to give the USA eight midfielders.

"Yunus is someone that I'm familiar with," Adams added. "I've had a couple of camps with him now. I grew up with Luca de la Torre and know him and how skillful he is and how hard he's worked for his own path. And to see him striving now and making his own strides in Netherlands is great to see.  I remember playing some preseason games against [Busio] when I was at New York and he was at KC so to see the strides he's made is unbelievable. I'm really excited for him. Hopefully, they all get opportunities. We're going to need everyone this camp."

The USA is going to need better play out of its midfield, which didn't create enough chances in the first window.

"I just need to try and get the ball in areas where I'm able to break lines more effectively and just get the guys in attacking positions the ball more often," said Adams. "We had a tendency for our attacking players to come a little bit deeper and try to find the ball. And to be honest, that's completely normal for attacking players when they don't feel like they can get the ball, then they have to come back and get the ball. If we're just a little bit more efficient and we're able to get them the ball in better positions, I think that that's going to obviously have a big effect on the team."

americans abroad
18 comments about "Tyler Adams on USMNT's wrong focus during last window and what midfield must get right this time".